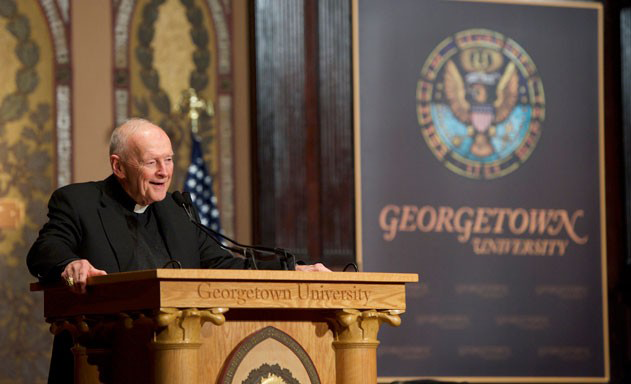 A petition urging Georgetown University to revoke the honorary degrees of Cardinals Theodore McCarrick and Donald Wuerl for their roles in widespread reported sexual misconduct within the Catholic Church has been signed by 1,376 individuals.

McCarrick has been under fire since June, when allegations of sexual misconduct against men and boys surfaced against him. Wuerl was found to be involved in covering up sexual misconduct in August when a Pennsylvania grand jury report was released that detailed seven decades’ worth of such misconduct in Pennsylvania churches. Students at Georgetown have been pressuring the university to take a stronger stance against McCarrick’s and Wuerl’s actions, but the university has yet to take action.

Ten students delivered the petition to University President John J. DeGioia’s office Sept. 14. The petition calls for the university to revoke the honorary degrees of Wuerl and McCarrick, to condemn church leadership for its role in covering up the abuse, and to demand the resignation of Wuerl. Other Catholic institutions, including the Catholic University of America and Fordham University, have already rescinded the degrees previously bestowed upon McCarrick.

“As a Jesuit university, Georgetown is obligated to speak out against injustice, especially when our own leaders in D.C. neglect that duty,” the petition reads.

Both Wuerl and McCarrick, having served as archbishops of Washington, developed relationships with Georgetown University. Both received honorary degrees from the university — McCarrick in 2004 and Wuerl in 2014 — and McCarrick collaborated with Georgetown’s Initiative on Catholic Social Thought and Public Life, speaking at several of their events.

On June 20, the Archdiocese of New York removed McCarrick, former archbishop emeritus of Washington, from public ministry after an investigation found that the allegations that he had sexually abused a minor were credible.

Multiple accusations against McCarrick surfaced in the following month, and he resigned July 28, The New York Times reported.

After the Pennsylvania report came out Aug. 14 detailing seven decades’ worth of sexual misconduct across the state of Pennsylvania, Wuerl was implicated for his actions while he led the Diocese of Pittsburgh. Wuerl led the Diocese from 1986 to 2006, before becoming archbishop of Washington.

Wuerl, facing pressure over his role in allowing abuse to continue, is currently meeting with the pope to discuss the resignation he submitted in 2015, as all bishops are required by church law to do when they turn 75. The pope has not yet accepted Wuerl’s resignation.

Austin Rose (COL ’18, LAW ’21), in collaboration with Grace Laria (SFS ’19), Max Rosner (COL ’18) and Tomás Álvarez Belón (SFS ’18), started the petition three weeks ago after his first efforts to encourage the university to respond to the Pennsylvania report and to accusations against McCarrick produced no results.

Rose said he was motivated by a personal connection to the systematic abuse in Pennsylvania.

“I was really upset about the sex abuse report largely because at least one member of my family was abused by a priest named in the Pennsylvania report,” Rose said in an interview with The Hoya. “I initially reached out to some members of the administration, sent them an email along with a couple of fellow alums cc’d on the email to see if they would take action. Then they were kind and respectful to me as far as responding, but to the best of my knowledge they didn’t do anything.”

Laria said she is disappointed with the university’s response and saw the petition as a way of holding the university accountable.

“While individual members of faculty and staff have been supportive as I’ve processed this anger and disappointment, to not see a response at the university-level is disturbing and frankly makes no sense to me,” Laria wrote in an email to The Hoya. “I view my signature on this petition as a way of holding Georgetown accountable to affirming its commitment to caring for the whole person and taking a strong stance against the prevalence of sexual assault on our campus.”

DeGioia wrote to the entire Georgetown community condemning the sexual misconduct within the church Sept. 4.

“President DeGioia’s message to the community earlier this month shared that the University has initiated processes to address the deeply troubling revelations about Archbishop McCarrick and those contained in the Pennsylvania grand jury report. This includes an honorary degree review process,” a university spokesperson wrote in an email to The Hoya.

Both Catholic Women at Georgetown and Knights of Columbus have publicly shown support for the petition.

Erica Lizza (COL ’19), president of Catholic Women at Georgetown, said she supports the petition because she believes that responsibility now falls upon the public to hold the church accountable.

“The fact that this pattern keeps resurfacing shows the Church hasn’t fully addressed it, and ordinary Catholics need to show that preventing abuse is important to them,” Lizza wrote in an email to The Hoya.

Catholic Women at Georgetown and the Knights of Columbus are hosting a Eucharistic Holy Hour for victims of sexual abuse Friday to encourage further reflection.

“I hope that the Eucharistic Holy Hour encourages more of the Catholic community on campus to reflect and discuss this moral catastrophe,” Lizza wrote.

Rose said that though rescinding the honorary degrees may not be the most substantial action, it still sends an important message to the community.

“Revoking the degrees send the message that there’s absolutely zero tolerance, that we are not going to accept excuses for that kind of behavior,” Rose said. “This is an easy thing to do, and there really is in my opinion no excuse for not doing this.”