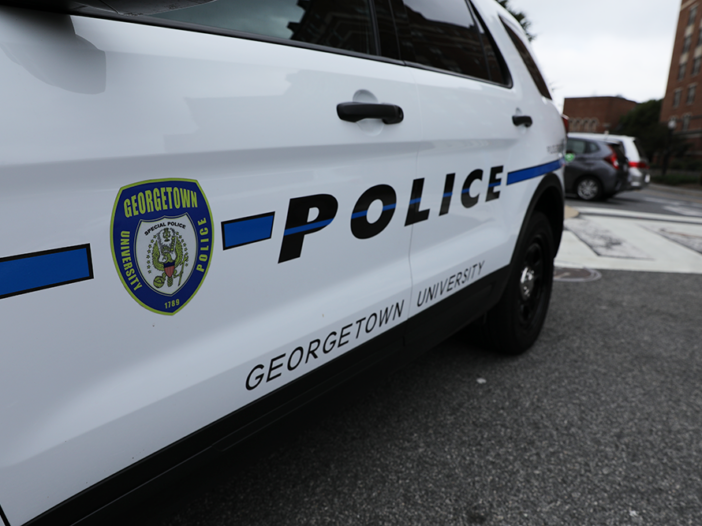 A student-led working group calling for the abolition of university police amid ongoing complaints of hyperpolicing on campus is requesting greater community support and involvement in the group’s advocacy.

While the working group ultimately hopes to abolish GUPD, it is currently focusing on engaging with the university and educating the Georgetown community, according to GUSA Senator Ace Frazier (MSB ’23), a member of the working group.

“We really want to be entirely prepared because people don’t really understand sometimes how abolition works,” Frazier said in a phone interview with The Hoya. “They think that it’s just immediately getting rid of and trying to force out whatever thing that you’re against or thing you are trying to change, but in reality, it starts a lot more with preparing and building up what’s going to replace that thing beforehand.”

Calls for abolition come amid ongoing complaints of hyperpolicing, specifically from students of color who have shared experiences of unnecessary surveillance and excessive use of force from GUPD. Despite these experiences, there has only been one formal complaint against GUPD since 2014, which involved someone who was not a member of the Georgetown community.

Following the killing of George Floyd last summer, students also circulated a petition calling for the university to cease all relationships with police departments amid nationwide protests against police brutality in attempts to support Georgetown’s Black community and combat racial injustice.

Recently, the working group has been researching preventative measures and alternatives to policing, including ways to protect communities through education and mental health support systems, according to Frazier.

“We are really solidifying our own knowledge on the subject and what actions can be done by the university before making any direct acts to abolish or get rid of GUPD,” Frazier said.

The working group is hoping to present a proposal to the university detailing alternative solutions to GUPD by April, according to Jeffries.

“I ran for senator on the platform of abolishing the police because I think we should abolish the police, both in universities but also just generally,” Jeffries said in a phone interview with The Hoya. “I never want the university to feel like abolition is impossible because they lack the imagination.”

GUPD is working to better engage with the Georgetown community and encourage an equitable environment, according to Associate Vice President for Public Safety and Chief of Police Jay Gruber.

“The Georgetown University Police Department is committed to continuing to improve its processes and procedures, engaging with the campus community, and listening and responding to feedback to ensure there is no racial bias in its actions as it seeks to provide a safe campus,” Gruber wrote in an email to The Hoya.

GUPD officers have been required to participate in training on reducing bias in policing, racial justice and community engagement since 2016, according to Gruber.

“GUPD works 24/7, 365 days a year to protect the University from crime and numerous threats, and responds to thousands of calls each year to support students, faculty and staff who are in need,” Gruber wrote. “We also recognize that keeping the Georgetown community safe includes constantly working to eliminate structural racism and any form of bias in its operations.”

No matter how much GUPD reforms, many students in the working group believe it is beyond repair. In addition, the working group is also advocating for expanding programs that already exist at the university, such as hiring transformative justice practitioners in health education services and providing a hotline for mental health crises, according to Jeffries.

“Successful abolition depends on communities of care, and it’s not just about tearing down white supremacist systems,” Jeffries said. “It is also about, how can we depend on our community to mitigate harm?”

As students continue to raise concerns about GUPD’s practices, the working group hopes the Georgetown community will recognize police violence goes beyond physical assault, according to Jeffries.

“Just because a Black or Brown student on this campus has not been physically assaulted by GUPD, that doesn’t mean that GUPD isn’t actively enacting violence against Black and Brown people on this campus,” Jeffries said. “I feel like every time I hear a story about GUPD from someone that is Black and Brown, it is traumatic, and that is violent.”

The working group is now calling for greater student and community involvement as it continues to advocate for reform, according to GroupMe messages.

Although abolition is a long-term project, establishing support systems and providing resources to the community is still important and necessary work, according to Jeffries.

“I do not even know if I am going to see abolition at this university by the time I graduate, which is fine,” Jeffries said. “But at least for me, and I know for a lot of people in the working group, the work will never stop. The work for abolition, the work for getting resources for people, the work for building communities of care, that is never going to stop. We are all just in it for the long haul.”