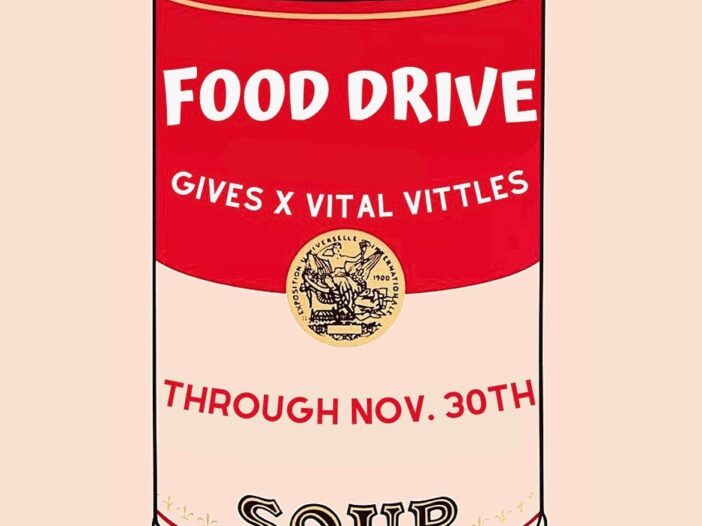 Georgetown Individuals Vocal and Energetic for Service (GIVES) and Vital Vittles (Vittles) are partnering to organize an on-campus food drive for Thanksgiving.

Students and community members are encouraged to donate nonperishable food, including beans, lentils, canned fish, pasta, peanut butter, cereal and canned fruits and vegetables that will go directly to the Capital Area Food Bank through Nov. 30. GIVES, an on-campus student organization dedicated to performing acts of service within the Georgetown University community and beyond, coordinated with Vital Vittles, the flagship storefront of student-run business the Corp, for a central spot for members of the Georgetown community to purchase and donate food for the drive.

Reona Pereira (SOH ’23), president of GIVES, said GIVES decided to launch the food drive with Vittles in the spirit of the Thanksgiving holiday and to provide an opportunity for Georgetown students to support the Washington, D.C. community.

According to Pereira, GIVES specifically chose to donate proceeds to Capital Area Food Bank given the organization’s mission and its care for families across the District.

Pereira said the food drive has thus been very successful, filling over six boxes of food to donate in only four to five days, in part due to efforts on the part of Vittles to boost donation efforts.

“We really appreciate all the work Vittles and the Corp has done to encourage people to donate,” Pereira wrote. “We wanted to partner with Vittles given their structure and the goods they sell. Our hope was that students would buy a couple extra snacks when they do their own snack runs to donate to the drive.”

Joshua LaRock (MSB ’23), director of Vital Vittles, said when GIVES approached Vittles regarding their food drive idea, it made sense to partner with the group as a part of the Corp’s philanthropic efforts.

“GIVES originated the food drive and reached out to utilize Vittles’ space for pickups,” LaRock wrote to The Hoya. “We felt that as the largest convenience store on campus, it was a perfect fit and aligned with our mission of ‘students serving students.’”

LaRock said this effort follows up other efforts from the Corp to further the organization’s mission such as Vittles’ organization of teams in the Washington, D.C. 5K for St. Jude Children’s Research Hospital and the BellRinger ride for the Georgetown Lombardi Comprehensive Cancer Center.

Abbey Swartzwelder (COL ’25), a GIVES marketing deputy, said the food drive is a simple way for students to spread kindness in the District in accordance with GIVES’s mission.

“To me, Vittles is like a hub for Georgetown students, and many of them will visit it at least once a week for food or other essentials,” Swartzwelder wrote to The Hoya. “This makes it a great place for a donation box because we knew there would be lots of people stopping by.”

Daniel Flynn (COL ’23), Vittles’ general manager, said that while Vittles has helped organize food drives in the past, this specific fundraising effort has been its most successful.

“We hosted similar food drives around the holiday season in the past, but this is our first time partnering with GIVES — and it has been our most successful drive to date,” Flynn wrote to The Hoya. “Partnering with other philanthropic organizations on campus maximizes our impact on the Hilltop and the DMV community. We are so glad that we can utilize our resources for such a great cause.”

LaRock said students’ willingness to become involved with the drive has helped perpetuate its success thus far.
“None of this would be possible without the generosity of the student-body, faculty, and customers we serve on a daily basis,” LaRock wrote. “We are grateful for your support.”