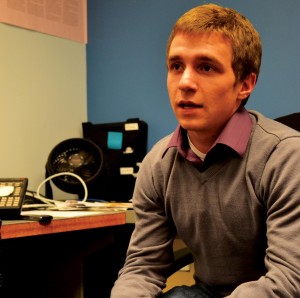 Meagan Kelly
Alex Villec (COL ’13) spoke exclusively with The Hoya about his encounter with Jared Loughner moments before Loughner allegedly opened gunfire at an event for Rep. Gabrielle Giffords (D-Ariz.).

For Alex Villec, it was just another routine event for Rep. Gabrielle Giffords and her constituents.

Villec (COL ’13), an economics and government double major, had already interned twice with Giffords’ (D-Ariz.) office; he knew the ropes. Familiar with the full-time staff and the responsibilities for volunteers at such a public event, he was there to organize the crowds who turned out to see the congresswoman.

In an interview with The Hoya, Villec described the event as an opportunity for constituents to become acquainted with Giffords, who represents the Tucson, Ariz., metropolitan area. Stationed at the top of the line, he was explaining the logistics of the event to visitors, directing them to the back end where they would make their way up to meet Giffords.

When Jared Loughner arrived, he approached Villec to ask, like many other guests, whether or not Giffords was present. Villec informed him that the wait to speak with the representative was about 20 minutes long. According to Villec, there was nothing especially unusual about the encounter, though he recalls that Loughner did seem to be distant during the exchange.

“He seemed to comply. I guess looking back, the strangest thing about it all was the way he was kind of stand-offish and kind of dismissive,” Villec said. “It’s chilling to look back on how that interaction actually took place, but at the time there was nothing that indicated anything out of the ordinary.”

Though Loughner did initially join the line, he left after only a few minutes, walking directly past Villec without acknowledging him — and headed toward the table and pillar that were separating Giffords from the public.

“I think his mind was made up at that point,” Villec said.

Seconds later, Loughner allegedly opened fire with a Glock 19 semiautomatic handgun. Loughner allegedly killed six people and wounded 14 others, including Giffords, who is still in critical condition after having been shot in the head.

“The first reaction I had was, ‘Is this really happening?’ I haven’t been around gunfire before, and it took a few seconds to settle in that people were actually dying,” Villec recalled.  “I looked to my left, and I saw a man lying on the ground on his back, and that’s when it really occurred to me that this was serious, and that this was completely real.”

Villec then ran from the scene, sprinting past onlookers to a Wells Fargo bank. Once there, Villec spoke with 911, then remained in the bank for another 25 minutes until the sheriff arrived to bring him back to the scene.

There, Villec learned that friend and fellow staff member Gabe Zimmerman, who was Giffords’ community outreach director, had been killed in the shooting.

Zimmerman was a favorite around the office, popular for his personable nature, which enabled him to kindly and effectively manage constituents, Villec recalled. He believed strongly in the power of democracy and sought to cultivate a special bond between representatives and citizens.

“[Zimmerman] is everything that is laudable about public politics,” Villec said.

When Villec was still a fresh intern in the office, Zimmerman explained the importance of patient communication with constituents. “He told me, ‘When you are dealing with constituents, when you are dealing with people who are interacting with government for the first time, you’ve got to recognize this intimate and almost sacred link between a people and its government,'” Villec said.

In the aftermath of the shooting, detectives questioned Villec as they pieced together the incident. Four hours later, Villec said he emerged from the interview room to find journalists swarming around him in search of quotes. He was the first witness released from the crime scene and in an attempt to appease the press, Villec supplied reporters with his home phone number. Journalists continued to call him incessantly.

Six days later and now returned to campus, Villec appears to be handling himself well even as public attention persists. Villec said Georgetown serves as a welcome distraction from the event; he said he feels stable and is glad to be back at school.

Still, each day poses a challenge as he looks to reconcile his emotional responses with the reality of the shooting in Tuscon.

“Every day is different, and some days it’s a lot more palpable, and other days, you’re trying to comprehend it, and even other days you are just outright mad,” he said. “One day I might see something that triggers, not necessarily a flashback, but kind of a recollection of these events.”

The release of Loughner’s mugshot certainly rekindled some of Villec’s anxieties, as he could not help but remember encountering the man just days before.

“When the mug shot of the suspect was first displayed on the Internet, I opened up Internet Explorer, and the first thing I see on the front page of The New York Times is the man that I had spoken with moments before the incident, and somebody who carried out this heinous crime, and there he is staring the nation in the face with a despicable grin,” Villec said.

“It just makes me sick to my core because I spoke with him moments before, and it’s really hard for me to grasp the kind of disorder that has to be going on in his head that led him to commit something like this.”

The Loughner case has given rise to an inflammatory political debate, in which both Democrats and Republicans have been quick to blame the opposition for the alleged gunman’s radicalization.

But Villec said it boiled down to something beyond any tension on the political scene; neither party can be held accountable for Loughner’s mental instability, he said.

“This wasn’t something done rationally — this can’t be contributed to one side of the political spectrum or the other. This was just something run amok. This is really not the time to talk about politics and inject their own ideology into it,” he said.

Villec feels the discussion should take another direction: It ought to result in a re-evaluation of Arizona’s mental health management, he said. In fact, multiple reports now suggest that Loughner showed signs of radicalization long before he opened fire last Saturday.

“We as a society have to realize that some people are wrestling with really difficult issues mentally,” Villec said. “We have to devote all the time and energy we can into making sure that those people aren’t drawn to the end of an abyss, where they feel like the only way out of their misery is committing a crime like this.”

The entire United States now feels the repercussions not only of Loughner’s isolated attack, Villec emphasized, but of the breach of democracy that his actions represented. The pact between constituents and their representatives has been violated, he said.

“This is something that can’t happen in America, and I think that’s why people are so shocked,” Villec said in his final comments. “The idea of our democracy, and the idea of an interaction between public servants and the public, was ruptured. This connection was ruptured, and that’s got people up in arms, as it should.”