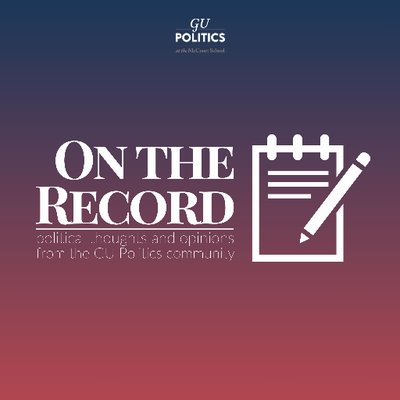 The student-run publication “On the Record” was launched last week to serve as an online forum for political discourse on campus. The Georgetown University Institute of Politics and Public Service is funding the publication.

The publication was founded to promote dialogue about a range of political topics, Head Editor Caroline Gardner (COL ’20) said.

“We want to increase political dialogue on campus and give students a chance to write about politics, talk about how it’s affecting them in their lives, and give people a platform to start those conversations,” Gardner said.

The publication seeks to represent ideological diversity through its content, according to General Manager Max Magid (COL ’19).

“Obviously, with opinion, we try to keep it diverse,” Magid said. “We have Republican and Democrat editors, and we try to have people talking about issues that are more unique to them and not just left/right. That’s what we’re about, and what got the whole project started.”

Members of campus groups across the political spectrum have been invited to share their thoughts on a range of topics, Magid said.

Though the site will feature mostly opinion pieces, writers are welcome to submit pieces in a variety of writing styles, Gardner said.

Despite being a student-led site, the publication accepts contributions from professors as well as GU Politics fellows, alumni and professionals, Gardner said.

“On the Record” is the second major publication sponsored by GU Politics, following the launch of “Fly on the Wall,” a student-run podcast that talks to politicians, journalists and government officials to understand different political decisions.

Gardner said she is looking forward to creating a bigger staff that reflects ideological diversity among students.

“You look at a political club, and you know it’s going to be virtually all of one opinion, whether that’s College Democrats, College Republicans,” she said. “I think ‘On the Record’ is an integration of both of their ideas and a way to gauge how Georgetown students are thinking about certain issues and what really matters to them. So I’m really looking forward to bringing more writers on board and getting the whole thing started.”