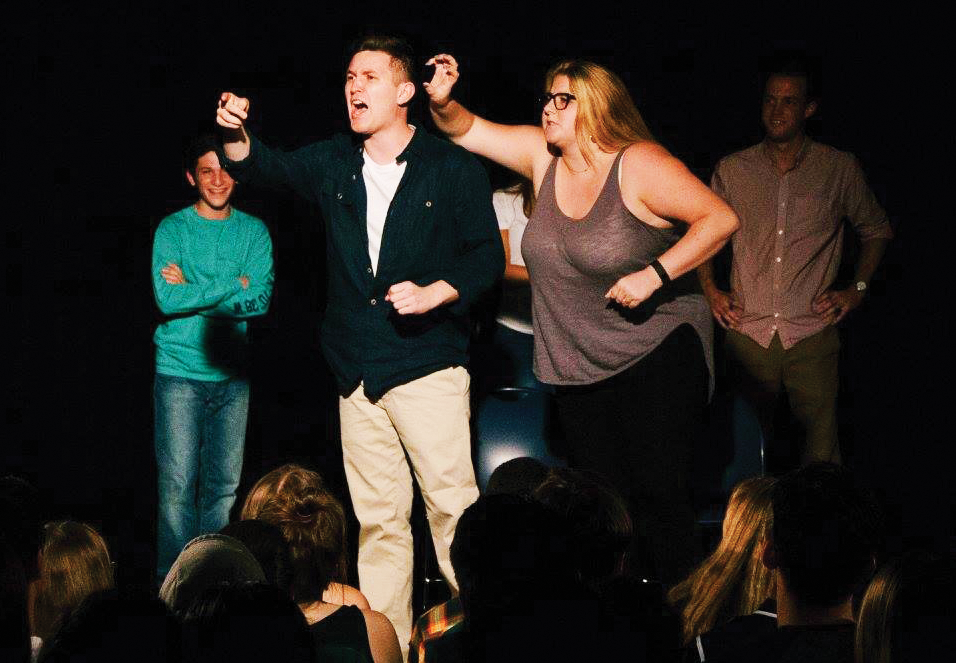 Boasting alumni like Nick Kroll (COL ’01), John Mulaney (COL ’04) and Mike Birbiglia (COL ’00), the Georgetown Improv Association has long established its reputation as a comic authority in the Hoya community. For 21 years, it has provided students with gasps and laughs through its impromptu unexpected humor. On Feb. 10 and 11, Improv Fest, the association’s largest event of the year, is set to bring together college improv groups from across the country for two spectacular nights of innovative comedy. This year, with two sold-out shows and seven visiting troupes from universities nationwide, the Georgetown Improv Association is confident that the festival will celebrate its 21st anniversary with a bang.

“Just by nature of trying to come up with some common reality with a partner in a scene, that makes it funny,” Howell said. “Because you  have one person who, you know, is thinking, ‘Okay, well, maybe we’re plumbers,’ and the other person is like, ‘But we just love velvet, right.’ And then it becomes two plumbers who are kind of quirky, and then you just stick to that reality.”

Despite its spontaneity, this seemingly offbeat, easy-going fun requires preparation.

“So, when I first joined, I thought, okay, we’re just going to be cuckoo, wacky … but there’s actually quite a bit of a finesse to it,” Howell said.

The Georgetown Improv Association practices five hours every week and has monthly performances.

“It’s interesting to see that something that seems so fun and lighthearted on stage can actually be quite technical and quite serious, in terms of practice and technique,” Howell said.

During the Improv Fest shows, the audience can expect 20-to-25-minute performances from each school, with the final performance from Georgetown Improv. Although some groups will choose to perform structured, quick short-form improv, others may opt for free-flowing long-form. Spectators should not expect a typical night out to the theater.

Bold audience members can volunteer to contribute a word, which the groups can use to form entire scenes. Just like that, you can become part of the action.
For the comedians, the weekend is much more than just the two performances.
“I have been looking forward to having the other teams visit since the end of last year’s Improv Fest because over the course of the weekend, each performer has many opportunities to get to know and become friends with one another,” Moakley said.

Along with the shows and social events, all teams participate in a professionally led workshop as well as a “jam,” in which members mix and perform with other schools.
Mary Clare Plaschke, from NYU’s “After School Special,” shares Moakley’s excitement.

“We like this improv festival so much we will willingly sit five hours on a bus for it. This is probably the only thing I’ll sit on a bus for five hours for,” Plaschke said.

She remarked on the joy of sharing such a unique hobby with new people and bringing her team’s unique qualifications to new audiences.

“One of our members Ryan just got a new hat that he’s going to perform with,” Plaschke said. “So we’re really excited about that, and you should be too.”

As with most improv shows, there is no script to follow or promises about what to expect. Each show is completely unique.

“What I can tell you is what has happened in the past: attendees are scrunched together in a dark, slightly too warm room, without leg room or easy egress,” Moakley said. “But soon, they’ll forget about all that, because they’ll either be captivated by laughter and the comedy on stage or be trying to figure out why the rest of the audience could possibly enjoy any of this.”