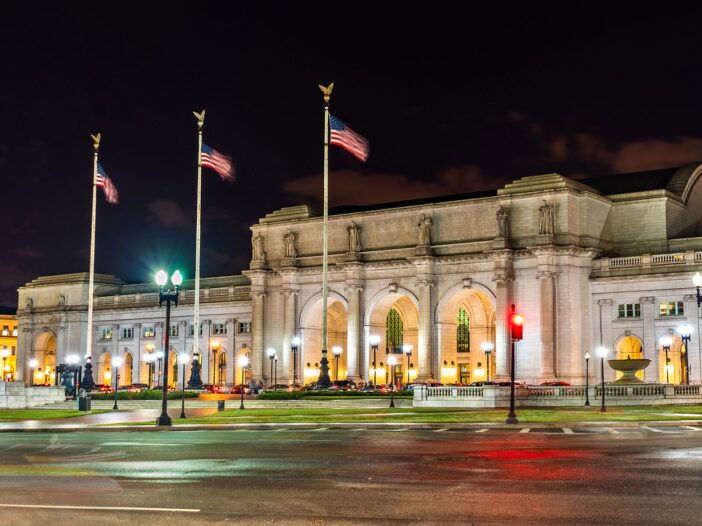 When Jackie Lamas (GRD ’23) received a call July 13 that over 150 migrants would be arriving at Union Station in the next three hours, she immediately began organizing her fellow students.

“We told Georgetown students to meet at Union station at 8:30,” Lamas told The Hoya. “I was just blown away by how we got a group together of 15 students from Georgetown.”

That evening, students joined volunteers from across Washington, D.C., who work with local nonprofits and mutual aid networks. Volunteers in these networks have been meeting migrants at Union Station since April, when Texas Governor Greg Abbott began to send migrants via bus to the District in an effort to protest President Biden’s immigration policies. One month later, Arizona Governor Doug Ducey began doing the same. Since April, approximately 15 buses have arrived per week.

July 13 was a particularly challenging night for local aid groups, as many organizations decided to take time off for the first time since April due to multiple COVID-19 exposures and burnout, creating a greater need for new volunteers and resources.

Now with over 4,000 migrants having arrived in the District, D.C. Mayor Muriel Bowser (D) sent Secretary of Defense Lloyd J. Austin a request for assistance from the D.C. National Guard on July 19.

“In the last month, however, the pace of arriving buses and the volume of arrivals have reached tipping points,” Bowser wrote in the letter.

As aid groups face rising challenges and buses continue to arrive on a near-daily basis, organizers and volunteers alike told The Hoya that donations of supplies, money and time are needed now more than ever.

While some students volunteered at Union Station for the first time July 13, others have been giving their time for months.

Andrea Nucete (SFS ’24), who has been going to Union Station since May, said she volunteers to speak with migrants as they arrive and assist with intake procedures.

“Organizations are looking for people that can speak both Spanish and English because 80 to 90% of the migrants are Venezuelans,” Nucete said in an interview with The Hoya. “Knowing that it’s people who, like me, are also from Venezuela, of course I wanted to help.”

Nucete was joined by fellow students July 13 when Lamas brought student volunteers onto the scene. Lamas is the president of the Georgetown University Migration and Refugee Policy Initiative (MRPI), a student organization in the McCourt School of Public Policy dedicated to studying immigration and refugee policy.

According to Lamas, the idea stemmed from the challenges many migrants face when navigating the complex legal barriers that come with entering the United States, including obtaining ID and attending immigration court. The video will address frequently asked questions from migrants arriving at Union Station, and will eventually be translated into brochures with multiple different languages, such as Spanish, Portuguese and French.

“Our hope is that the videos will support migrants once they have their basic needs met and are ready to focus on the difficult process of obtaining temporary and permanent legal status in the United States once their parole status expires,” Blandon wrote in an email to The Hoya.

In addition to initiatives at GULC, undergraduate groups are also volunteering their time and resources to provide aid to migrants. Georgetown University’s chapter of No Lost Generation (NLG), an undergraduate initiative designed to raise awareness of the refugee crisis, has also coordinated volunteers to help collect resources and contribute time at Union Station.

Soraya Bata (SFS ’24), a member of NLG, said she volunteered at Union Station for the first time July 13.

“The entire night, I was feeling so shocked at our government’s complete lack of response to this migration crisis. These people have traveled for weeks and weeks, in inhumane conditions,” Bata told The Hoya.

The journey that migrants take to reach the U.S. is a dangerous and often fatal one. Migrants from across the world will travel to South America and trek on foot through Colombia and Latin America before reaching the border. The most dangerous part of this trip involves crossing the Darién Gap, a 60-mile long jungle in Colombia known for its inhospitable conditions.

Lamas told The Hoya she met migrants at Union Station who had traveled through the Darién Gap.

“I have had the privilege of having conversations with the migrants and hearing about their experiences traveling through that jungle,” Lamas said. “It is absolutely horrific the things that they experience.”

Once they arrive at the U.S. border, immigration officials force migrants to throw away all their belongings, save for the clothes they are wearing. This requirement has created a significant demand for clothing, hygiene products, childcare supplies and monetary donations for migrants, Nucete said.

Georgetown community members can donate clothing at donation bins located on the first floor of the New North building and in the third-floor lobby of the Intercultural Center (ICC), according to Lamas.

The Fight Led by D.C. Activists

Mutual aid organizations, nonprofits and nongovernmental organizations across the District have been working for months to secure the safety, security and dignity of migrants arriving at Union Station.

SAMU currently provides training for volunteers seeking to help migrants at Union Station, according to Hammond, who said the program focuses on training volunteers to deliver trauma-informed aid and navigate respite care.

“Respite is a really important term for people who are working with us to understand. We can’t help long term,” Hammond told The Hoya.

SAMU’s contract with FEMA allows their organization to meet 1,500 to 2,000 migrants per month, according to Hammond, who said this agreement means the organization only has the resources to provide short-term care. The organization can also provide limited support to pay for migrants’ travel expenses to destinations outside the D.C. area.

Many mutual aid organizations throughout the District provide the long-term aid that SAMU cannot. The Migrant Solidarity Mutual Aid Network, for example, is a collective of over twenty groups within the D.C. area that act in solidarity with migrants by providing long-term aid and resources, according to Ashley Tjhung, an organizer with the network.

“Mutual aid often gets confused with charity. But we believe in solidarity, not charity. And so we see our liberation as tied up with everyone else’s,” Tjhung said in an interview with The Hoya.

Claire H. — a D.C. resident and volunteer who asked to rescind her last name for privacy reasons — told The Hoya she volunteered to provide long-term mutual aid by housing a mother and her young daughter who arrived at Union Station for three months.

For migrants seeking to stay in the D.C. area, Claire said the list of logistical barriers is extensive: from obtaining ID to enrolling children in school to accessing healthcare, each factor presents a significant challenge to their safety, wellbeing and ability to work.

“For example, the mother that we were hosting had what turned out to be a migraine, but it was her third or fourth day, so we took her to urgent care,” Claire told The Hoya. “Urgent care said they strongly recommended she go to the emergency room.”

When Claire took her to the emergency room, she was sent home eight hours later with anti-nausea medication and a $10,000 bill.

“If she had been able to be on Medicaid by that point, she would have had other options,” Claire said.

The Migrant Solidarity Mutual Aid Network has an extensive list of demands for Bowser, according to Tjhung, including expanding respite shelter, opening temporary housing for those staying in the D.C. area, ensuring healthcare access and providing food and transportation.

“We need the city to step in and create something that’s a lot more sustainable, and provide dignity for the migrants who are arriving on the buses who are really just looking for somewhere stable that they can arrive to,” Tjhung said.

In Bowser’s letter to Secretary Austin, she wrote that the responsibility of providing resources for migrants falls on the federal government, rather than on District officials.

“Immigration is a federal issue, one that needs to be addressed by the federal government with federal resources,” Bowser wrote.

Bowser did not respond to The Hoya’s request for comment.

From countless volunteer hours to dedicated activism, Tjhung said the dedication of local mutual aid organizations has been inspiring.

“Really, it’s been a really amazing response that has shown the strength of mutual aid networks across the DMV,” Tjhung said.

For Nucete, one of the most memorable parts of the volunteer experience amid these difficulties has been witnessing the kindness of others.

While trying to check luggage for a migrant family at an airport that didn’t accept her form of payment, Nucete said the generosity of a complete stranger saved the day.

“I stopped a woman that was walking past and asked her if she wouldn’t mind paying for the suitcase. I told her I would Venmo her right away. She didn’t ask questions or anything, she just paid for it,” Nucete said. “When I asked for her Venmo, she told me no. I kept kind of pushing and she eventually told me her family migrated from Cambodia a while ago, and then she thanked me. I remember riding back on the Metro just crying the whole time.”

Nucete said the kindness shown by that stranger gave her a strong feeling of hope.

“That was just one of those days where it felt like humanity did what it was supposed to do,” Nucete said.