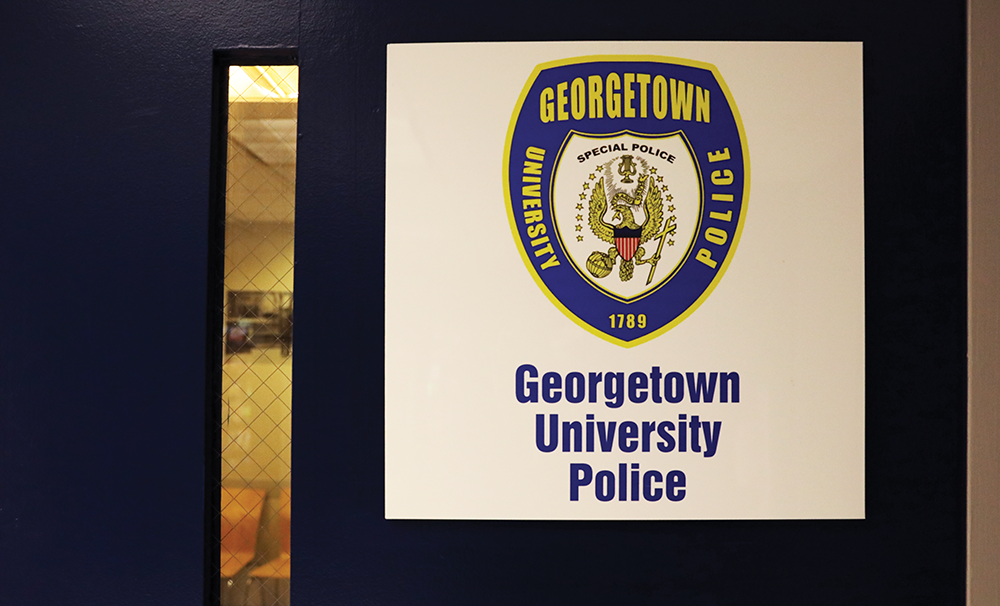 About 20 students presented University President John J. DeGioia a letter on April 13 advocating for the Georgetown University Police Department to equip its officers with firearms.

“We don’t want just another review that ends in no action,” Collins said in an interview with The Hoya. “We want immediate resolve from President DeGioia. As a first step, we would like DeGioia to work with Metro PD in order to place armed security on campus. Second, we want him to give Chief Gruber the authority to train and equip his officers with firearms. We need armed security today.”

The administration has received the letter and is reviewing it, according to Rachel Pugh, Georgetown’s senior director for strategic communications.

In the letter sent to DeGioia and GUPD Chief Jay Gruber, Collins and Amelia Irvine (COL ’19) said the recent shootings in Parkland, Fla. and Great Mills, Md. inspired them to call for immediate action by the administration.

Fourteen students and three staff members were shot and killed at Stoneman Douglas High School in Parkland, Fla., by 19-year-old gunman Nikolas Cruz on Feb. 14. The shooting provoked a call for increased gun control and gun violence prevention, and precipitated the March for Our Lives, a student-led movement demanding gun reform. About 2 million people gathered at Pennsylvania Avenue and at over 800 other locations around the world on March 24 to protest gun violence and mass shootings as part of the March for Our Lives movement.

Approximately one month later, 17-year-old Austin Wyatt Rollins injured one student and killed student at Great Mills High School in southern Maryland. After the shooting began, an armed school resource officer, Blaine Gaskill, responded to the shooting but did not fire the shot that killed the shooter.

“The tragic shooting in Maryland proved the wisdom in having capable law enforcement protection in schools,” Collins and Irvine wrote in the letter. “The heroism of Officer Gaskill saved lives, as did the school’s policy to employ an armed school resource officer. Because of Officer Gaskill’s presence inside the school, he was able to respond to the shooter in less than a minute. At Georgetown, campus police have no means of stopping a similar shooting.”

The letter compared Georgetown’s policy with those of other surrounding universities and high schools with armed officers on their campuses. Howard University and the University of the District of Columbia already have armed police on campus, according to the letter.

GUPD currently employs the same policy as other local institutions in the region, including The George Washington University and American University, Pugh said.

Collins declined to disclose the names of the members of GUARD, but said there are currently at least 20 members, representing all four schools and class years.

“It is a movement about an idea, not as much about individuals,” Collins said. “So, while I’m here speaking with you today, it’s really all about the idea. Students that we have in GUARD will be writing letters and doing other activities to promote the movement. It’s really not about individual names.”

In a viewpointin The Hoya, Irvine advocated for arming both students and GUPD officers (“Expand Campus Gun Rights,” The Hoya, April 16, A3). Irvine said she has not changed her opinion, but the group’s advocacy focuses on the measures that are most feasible.

“My personal views haven’t changed, but when it comes down to what is actually viable, and what is the most important,” Irvine said. “[Arming GUPD] is what I view as the appropriate course of action. Getting a law changed would take years, this is just an administrative decision. It is well within our reach as students.”

GUARD’s movement to increase the presence of armed officers comes despite a series of incidents of armed police officers fatally shooting people of color as well as issues of police brutality at large.

On March 18, Stephon Clark was fatally shot by the Sacramento Police Department, who fired 20 rounds with eight shots hitting him while investigating a vandalism complaint. On April 16, video released by The New York Times showed police tackling and punching a naked and disoriented Harvard University student.

333 people have been shot and killed by police in 2018, according to The Washington Post.

Collins said concerns about the misuse of firearms by GUPD can be dispelled by instituting a proper training program for officers.

“I am confident that President DeGioia, as well as Chief Gruber, would go to great lengths to train their officers in applying the law equally. I know they would go through extensive training to ensure that those things don’t happen,” Collins said. “All students are vulnerable if a mass shooting were to occur … presenting this deterrent and response to an active shooter on campus protects all students.