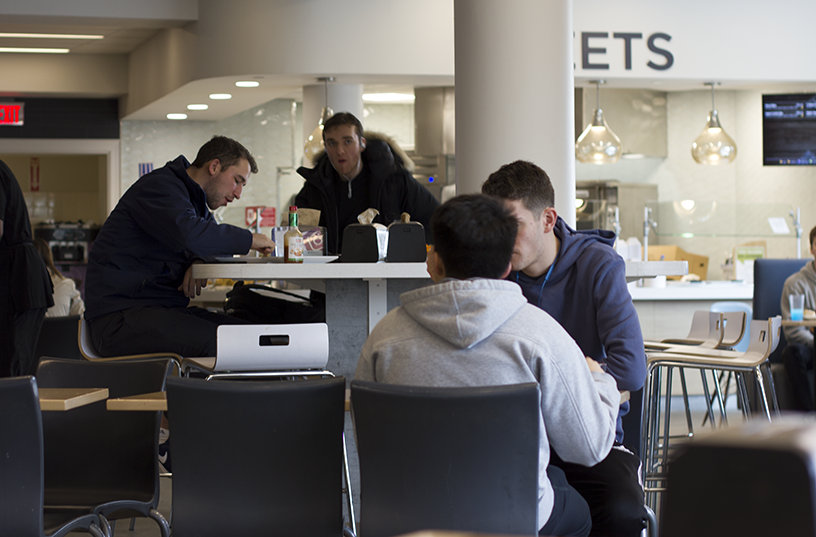 UNITE HERE! and Aramark reached a three-year employment contract deal in 2012, which was renegotiated and renewed in 2015 for another three years. The union had its first meeting with the Aramark to renegotiate a new labor contract after its expiration this past December.

The Georgetown Solidarity Committee, a student group committed to promoting workers’ rights, and La Casa Latina, which provides resources for Latinx students on campus, co-hosted an event titled, “Where’s the Love, Aramark?” Students spoke about the menial conditions faced by Georgetown food service employees. No Aramark workers were present at the event.

La Casa Latina hosted the event to stand in solidarity with dining workers as many of Aramark’s food service workers are people of color, according to La Casa Latina Director Joseph Rodriguez.

“La Casa Latina supports the members of UNITE HERE! Local 23 as they bargain with Aramark,” Rodriguez wrote in an email to The Hoya. “We hope that the workers, many of whom are people of color that work long hours for low wages, can win a contract that accurately reflects the value and dignity of themselves and of their labor.”

“Our general plan is to make sure that the facts are known, students are present, and that our voices our heard,” Berger said. “We know that in the past that has led to change, and we’re confident that it will lead to change this time too.”

“Another central thing is that they want their benefits to be continued and to be expanded,” Mendez said. “For their pension to be increased, their Medicare to be improved, their healthcare to be improved. Even simple things like getting parking”

Communication between student-run organizations and union employees often occurs within limited time slots and with limited opportunity for in-depth conversation, Berger said. There are likely plenty more issues that workers have yet to voice.

“It’s really hard to find a manager-free space to talk. And that’s important, because even as we grow more informed, we don’t know everything workers know,” Berger said. “It’s important to keep in mind that we don’t know the whole story here, we are just getting some of the basic facts.”

This is not the first time students have advocated for better working conditions for food workers at Georgetown. In January 2012, students and employees staged a demonstration in O’Donovan Hall for the negotiation of a more fair labor contract between Aramark and the UNITE HERE! union. After a year of prolonged talks, workers were able to secure benefits like pay increases, signing bonuses, and year-round health insurance for all hires.

In 2015, 30 GSC members marched with 20 Aramark workers to Aramark leadership with a petition. Aramark management eventually agreed to workers’ demands, such as a 40-hour paid workweek, an agreements process to report managerial abuse or discrimination, and a cheaper healthcare insurance plan.

The current negotiations follow a tumultuous few years for Aramark, which recently came under fire with accusations of employee negligence and health violations throughout its service locations in North America, Asia, Europe and South America.

Students need to remember their advocacy is limited by their experiences, Berger said.

“Even as we grow informed, we don’t know everything workers know,” Berger said. “It’s important to keep in mind we don’t know the whole story here. We’re just getting basic facts.”