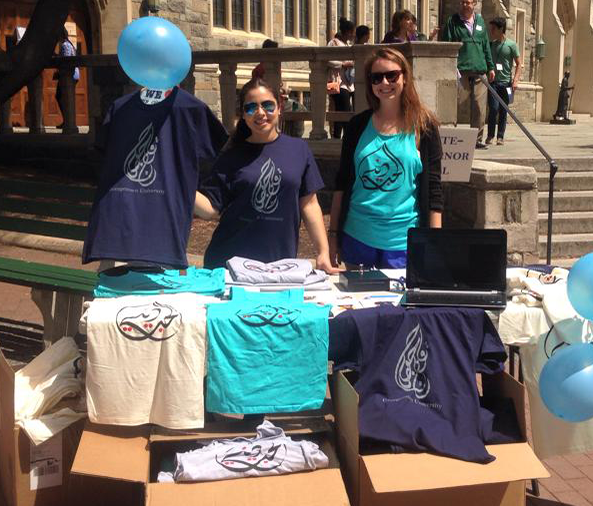 Five students in the Masters of Arab Studies program course “Refugees in the Arab World” began a fundraiser for Syrian and Iraqi refugees in coordination with the Collateral Repair Project this month.

The students, with help from a program graduate, are raising money by selling T-shirts featuring calligraphy designed by Syrian artist Mouneer Alshaarani. Each shirt, priced at $20, reads, “Love is my Religion.”

The group has raised $2,200 since beginning sales in Red Square April 18, and will continue to sell shirts until it reach es its goal of $6,000.

Associate Professor of cultural anthropology Rochelle Davis began teaching “Refugees in the Arab World” in 2006. The course focuses on displaced communities in the Arab world, using Sudan, Palestine and Iraq as case studies. It covers issues of humanitarianism, agency, citizenship, rights and history, with the aim of furthering an understanding of the experiences of displaced peoples.

CRP is a nonprofit based in Amman, Jordan, where thousands of Iraqi and Syrian refugees have relocated. The grassroots organization seeks to assist refugees and other victims of conflict through community-building workshops and the provision of emergency services including food vouchers, medical support and clothing.

Davis has conducted research with refugees in Jordan in conjunction with students, including Will Todman (SFS ’16). After visiting CRP, Todman decided to fundraise for the organization as a part of the course requirement to complete an action-based project.

“What we’re doing is relatively small scale,” Todman said. “But we’ve added two extra families to our food voucher scheme as a part of this fundraising, so we’re making an impact already.”

The fundraiser is also a component of CRP’s campaign “Community Grows Here,” which began April 14 and aims to raise $20,000 to support the organization’s emergency assistance and community programs.

Todman emphasized the community-based work of CRP as a component of the nonprofit that sets it apart from other organizations seeking to assist refugees.

“They’re nearly entirely operated by refugees now,” Todman said. “They’re really trying to create a sense of community within the refugee population, and they’re training refugees to be able to teach these classes themselves. So they’re not only recipients of aid, they’re also giving back to their own communities.”

Abbie Taylor (SFS ’12), another participant and former student in Davis’s course, currently works at the university’s Institute for the Study of International Migration and serves on the CRP board. Taylor highlighted the CRP’s work in assisting communities that can often be overlooked by larger non-governmental organizations.

“CRP aims to serve people who often fall through the cracks in terms of assistance, to provide the basics they need to carry on and survive,” Taylor said. “I think for this particular organization the emphasis is really on refugees as the ones who should really take the lead. It’s very much a way for them to find a new sense of community while living in a country that’s foreign to them.”

Casey Bahr (SFS ’15), one of the core fundraiser group members, stressed the pressing nature of the Syrian and Iraqi refugee crisis and the urgent need to alleviate it.

“The conflict has been going on for longer and longer, and there’s been a huge increase in donor apathy, especially in the United States,” Bahr said.

“You have a lot of these organizations that are really trying to provide assistance to these communities and unfortunately there’s been such a lack of funding. So this is really just trying to help bring these issues back to light and do what we can.”

Taylor added that in the face of the numerous ongoing crises around the world, including those in Libya, Yemen, Iraq and the Central African Republic, the situation of refugees in Jordan is often neglected.

Additionally, Todman spoke about how the CRP is attempting to take a different approach to refugee assistance by placing a larger focus on community building.

“I think people view refugees through a humanitarian lens, that they need to be sent aid and given shelter, which is true,” Todman said. “But I also think that we need to appreciate that people want to be part of a community and rebuild social ties, to feel like they’re important and have a purpose.”