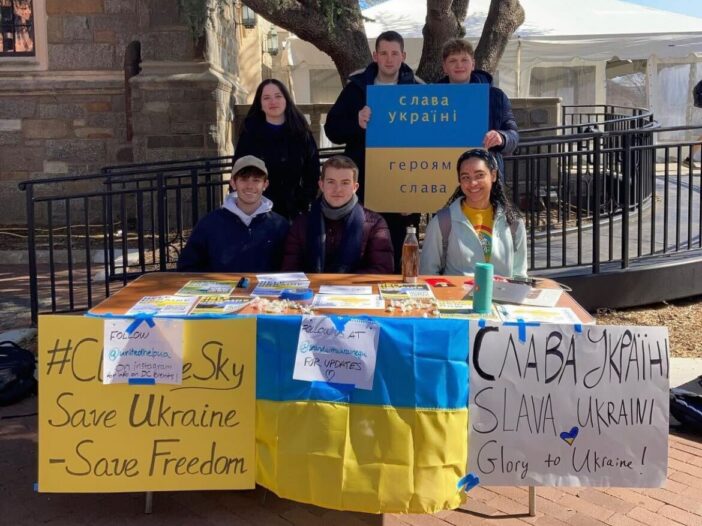 CW: This article discusses mass violence in Ukraine. Please refer to the end of the article for on- and off-campus resources.

“Slava Ukraini! Glory to Ukraine,” students cried at a demonstration outside Healy Hall in support of Ukrainians facing a Russian invasion.

Georgetown University students, staff and community members alike donned Ukrainian flags and signs with messages of support to gather at the steps of Healy Hall and show solidarity with the people of Ukraine. The March 2 demonstration featured Ukrainian student speakers, as well as former U.S. Ambassador to Ukraine John E. Herbst (SFS ’74).

Since the invasion, Inna Cherniak (SFS-Q ’23), who is from Ukraine, and her friend have shared shifts monitoring airstrikes in their hometown each night.

Herbst said the crisis in Ukraine poses a threat to the world if it is not taken seriously.

“What’s happening in Ukraine is both a moral outrage and a direct challenge to critical American interests,” Herbst said at the demonstration. “I hope you’re here because you support strong American Western policy to say no to Putin, because our lives are not on the line here, but our prosperity is and the world that your children will inherit is.”

The most important things people can do to help Ukraine are increasing awareness, urging their representatives to stand up for Ukraine, and donating money to Ukrainian support efforts, according to Andrii Sendziuk (MSB ’24).

“Money is really important in this situation, not only because of the contrasts between the Russian and Ukrainian armies, but also because there are so many displaced people,” Sendziuk said in an interview with The Hoya. “If anybody can donate anything, I think they definitely should and I think every single person in Ukraine would be utterly grateful for any smallest donation.”

Many organizations have begun to raise money for Ukraine including UNICEF, which supports the safety of children and families in the country; Médecins Sans Frontieres/Doctors Without Borders, which helps people travel to health care facilities; and Voices of Children, which provides psychological and psychosocial support for children who experience violent conflict.

Since the Feb. 24 Russian invasion of Ukraine, the Georgetown community has come together to express their support for Ukrainians. Beyond the demonstration, students have also taken to Red Square to raise awareness for the crisis in Ukraine. Their table displays images of the Ukrainian flag and messages like “Ukraine is not yet lost” and “Stop the war.”

Sendziuk, who grew up in Ukraine and helped lead the tabling effort in Red Square, said their goal is to spread information about the invasion that may otherwise be inaccessible in the United States.

Ukrainian American Orest Mahlay (COL ’22), who has family in Ukraine, said it is important to spread awareness of the situation in order to combat Russian disinformation.

“One way we’re trying to reach out to students is by allowing students that don’t know much about the situation to read more about it and just kind of read and fact check information about the war,” Mahlay said in an interview with The Hoya.

Ukrainian officials have urged American tech giants including Facebook and others to restrict Russian access to their platforms to combat Russian disinformation about the invasion. Meta, the parent company of Facebook, has banned Russian state-run media from sellings advertisements on its platform and has removed some accounts spreading disinformation.

Nicholas Frayter (MSB ’23), the founder of Georgetown Russian Association, has attended multiple anti-war demonstrations, and said he and many other Russians oppose the invasion of Ukraine.

“I think it is important to note that a lot of Russians do not want this war at all — it’s just one man that’s calling for this war,” Frayter said in an interview with The Hoya. “When you speak to people, they really want peace and don’t agree with what the government is doing.”

More than 6,000 Russian citizens have been arrested for protesting against Russia’s invasion of Ukraine.

Ira Tiasko (SFS ’23), who is also from Ukraine, said people must remember to consider the human impact the invasion is having.

“I’ve had a lot of professors talking about Ukraine as if it was a chess game, and it is disgusting,” Tiasko said in an interview with The Hoya. “If we start treating everything like a chess game, it’s gonna be really sad to live in the future.”

Josh Anderson (COL ’25), who has attended anti-war demonstrations, said it is important for non-Ukrainians like himself to show solidarity with the Ukrainian people.

“People like me who aren’t Ukrainian are there to show support not only in numbers, but in helping to chant, to amplify the message in person and on social media,” Anderson said in an interview with The Hoya. “If we allow this illegal invasion against Ukraine and this violation of human rights, that can just create a sort of colossal impact that escalates into other countries around the world.”

Although Ukrainians are strong, Cherniak said, they need the world’s support.