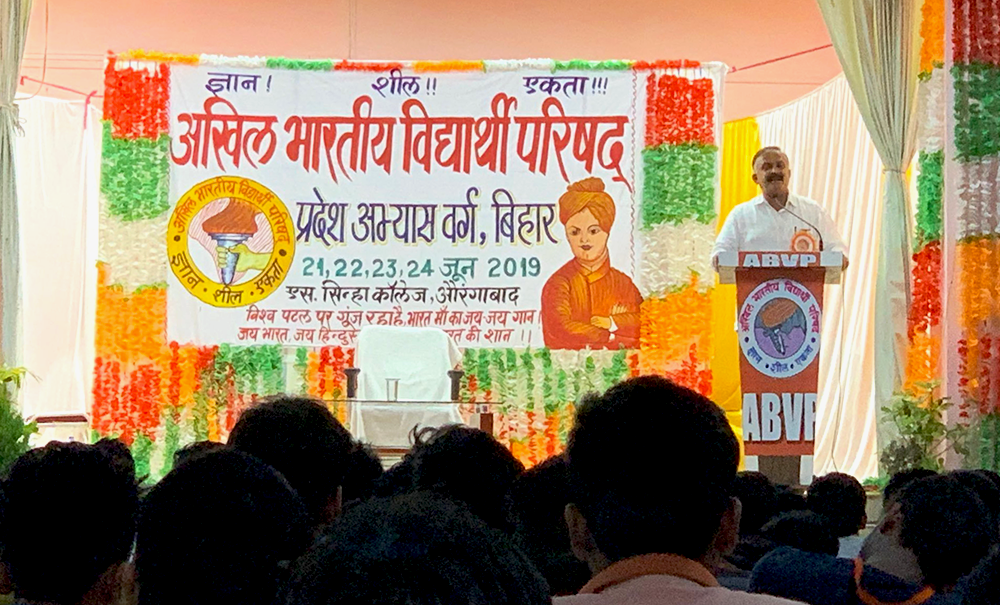 Over 100 students and campus groups released a statement condemning an event planned to feature Indian right-wing activist Sunil Ambekar and demanding transparency from the university following the event’s cancellation.

Ambekar canceled his appearance at the India Initiative event, “RSS: Roadmaps for India’s Twenty-First Century,” on Sept. 17, according to Associate Vice President for Strategic Communications Meghan Dubyak. Ambekar was initially invited by a faculty member to address students enrolled in the class “India Innovation Studio,” and the event was RSVP-only.

When the event was canceled, the change was not formally announced; the student statement notes the event’s web page disappeared Sept. 15. Given the lack of clarity, students released the anti-Akhil Bharatiya Vidyarthi Parishad statement denouncing the speaker’s agenda and his affiliation with ABVP on Sept. 16.

Ambekar is the national organizing secretary of the ABVP, a right-wing, Hindu-nationalist Indian student organization with more than three million members. ABVP is affiliated with the Rashtriya Swayamsevak Sangh, a larger paramilitary volunteer organization widely regarded as the parent organization of the ruling political party of India, the right-leaning Bharatiya Janata Party.

Both the ABVP and the RSS have been accused of fostering violence and intolerance against non-Hindu Indians, particularly Muslims, through their preaching of Hindutva, which refers to “Hindu-ness” and the ideology of Hindu nationalism.

Groups including the Asian-Pacific Islander Leadership Forum and Georgetown University Student Association signed the statement, which argued that Georgetown should not provide Ambekar a platform to speak to students. The statement cited examples of violence committed and encouraged by the ABVP, including multiple accusations of assault against students and teachers at Delhi University in 2017.

“By bringing Ambekar to campus and promoting the ABVP’s viewpoint to students, Georgetown stands in direct contrast to its moral backbone and Jesuit values by normalizing a group that has a violent history of abusing minorities in India,” the statement reads. “This event should not be taking place and we cannot, in good conscience, allow it to happen.”

The India Initiative, a program in the Office of the Vice President for Global Engagement that works to promote dialogue about India’s role in world affairs, organized Ambekar’s visit. The initiative promoted the event as a conversation about his upcoming book on the RSS and its vision for India — including the role of other faiths in India, Hindutva and caste politics, and LGBTQ rights. The “Indian Innovation Studio” course is taught by Irfan Nooruddin, the director of the India Initiative, and Mark Giordano, a professor of geography.

The event description, however, does not accurately reflect the values that Ambekar and the ABVP stand for, according to Sonali Mirpuri (COL ’20), who drafted the statement with the South Asian Working Group of APILF at Georgetown.

“The event as it was marketed says that he’s going to come to promote his new book,” Mirpuri said. “Simply Googling his name, so many things come up about crimes against humanity, crimes against college campuses, and it just confuses me why Georgetown would sponsor such a figure to come to campus.”

“Georgetown does not prohibit speech based on the person presenting ideas or the content of those ideas, even when those ideas may be difficult, controversial or objectionable,” Dubyak wrote in an email to The Hoya.

The university needs to be clearer with students about what events are held and the purpose of these events, according to Mirpuri.

“I feel like the event was put on with very little transparency in terms of like no one knew it was happening, it was a very under-the-radar thing,” Mirpuri said.

Events like Ambekar’s uplift racist and Islamophobic voices rather than highlighting minority perspectives in India, according to Jamal Jaffer (COL ’21), the academic chair for South Asian Society.

“There should be a reexamination on our position on India and relations with India,” Jaffer said. “We’re highlighting a lot of voices that are quite Islamophobic in the India space and in the political space, and we’re not really supporting a lot of the minority interests involved in these politics.”

Both Dharmic Life and Hindu Students Association released statements to their members addressing Ambekar’s event. The organizations condemned violence while acknowledging the right to free speech and debate.

In the wake of this controversy, students should take advantage of campus resources to learn more about India’s culture and politics, according to Hindu Student Association President Darshil Shah (MSB ’20)

“As a Georgetown student myself, I encourage others who are interested in the topics of Hinduism vs Hindu nationalism to read more about it and have meaningful conversations about the two and challenge the beliefs and arguments offered by both,” Shah wrote in an email.

Though the event was not highly publicized and was ultimately canceled, the fact that few students understood the event’s implications or even knew who the speaker was shows a pressing need for greater university recognition and discussion of non-Western issues, according to Mirpuri.

“Our lack of knowledge and our ignorance as an institution in promoting non-Western values has clearly shown through this event,” Mirpuri said. “It’s important to know about these things because we essentially, by having this event, would prop up someone in another country that has not just university effects, but long-term international effects.”