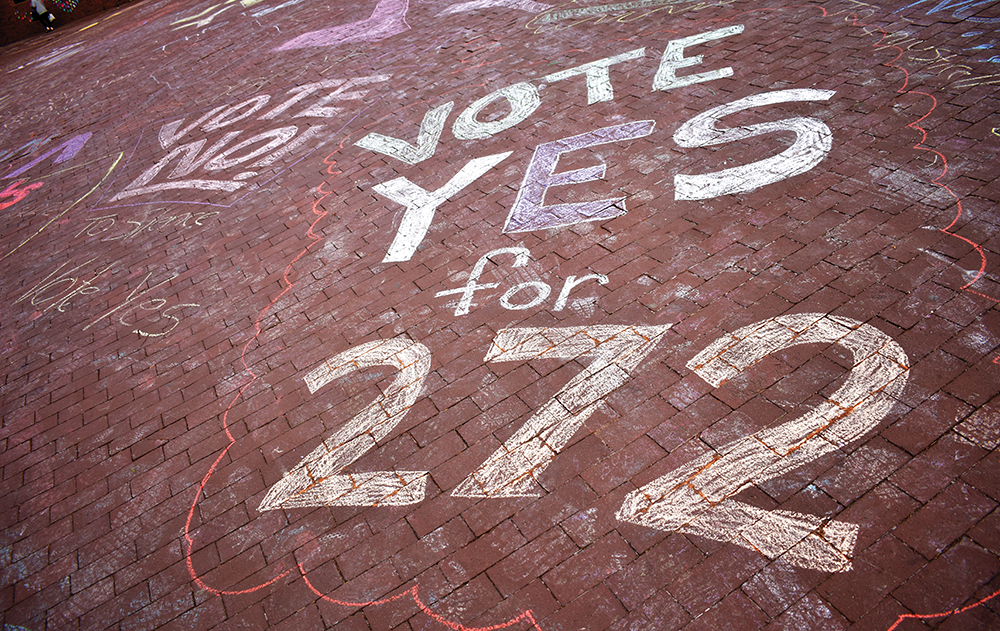 Students voted overwhelmingly in favor of a referendum to establish a semesterly fee that would go toward a fund to benefit descendants of the GU272 on Thursday night with the highest turnout in recorded student government electoral history. The university is not obliged to enact the proposed fee.

With 66.1 percent of students voting “yes,” the $27.20 semesterly fee in student bills would be allocated to descendants of the GU272, the 272 enslaved people sold by the Maryland Province of the Society of Jesus in 1838 to financially sustain the university. Should Georgetown approve this policy, it would establish the first collegiate reconciliation fund in the country.

Since October, the GU272 Advocacy Team, an on-campus student group that raises awareness for descendants, has worked with the Georgetown University Student Association to push for this referendum. The team has led an outreach campaign to educate students and encourage them to vote, through events such as an April 3 town hall featuring a panel of students both for and against the referendum.

Voter turnout in the election was 57.9 percent—beating the Feb. 2013 GUSA executive election which had 57 percent voter participation, according to GUSA archives. The high turnout will further the ongoing conversation surrounding descendant advocacy on campus, according to Shepard Thomas (COL ’20), a descendant and a member of the GU272 Advocacy Team.

“I’m definitely happy to see the response that we have, around 50 percent,” Thomas said. “I would just be happy to see this dialogue continue in the same direction.”

The university is not bound by the results of the April 11 referendum, according to university spokesperson Matt Hill. The university released a statement at 1 a.m. Friday acknowledging students’ voices but not specifying the university’s next steps.

“The university values the engagement of our students and appreciates that 3,845 students made their voices heard in yesterday’s election,” Vice President for Student Affairs Todd Olson wrote. “This student referendum provides valuable insight into student perspectives and will help guide our continued engagement with students, faculty and staff, members of the Descendant community, and the Society of Jesus.”

If approved by the university, the referendum would create a reconciliation fund, which would be presided over by a board of trustees including five students and five descendants. The reconciliation fund would then distribute funds toward purposes to the direct benefit of descendants of the 272, according to the Students for GU272 Facebook page. Proposed projects include funding K-12 education, establishing college scholarships and purchasing school supplies.

Lee Baker, a descendant of Nace and Biby Butler, a married couple among the 272 enslaved people sold in 1838, reaffirmed the importance of the students’ activism.

“The students remembered, recognized, and re-ignited awareness about Descendants who literally made it possible for today’s Georgetown University,” Baker wrote in an email to The Hoya early Thursday evening. “Regardless of what happens, we will know that Georgetown University students practiced solidarity and decided to ensure that such an historic injustice has a permanent lens for awareness, analysis and action.”

“The measures advanced in this referendum would put Georgetown on the right side of history and constitute the first reparations policy in the nation,” Francis and Olvera wrote. “The students of Georgetown have indicated their clear support for the University to take reparative action in order to address the outstanding moral debt incurred by the University’s decision to engage in and profit off slavery.”

Other universities, such as Harvard, Yale and Columbia, have acknowledged their past ties to slavery, according to the Associated Press. However, Thursday’s referendum marked the first time a university has held a vote on the inclusion of a fee that would raise funds for descendants.

Though the vote has passed, it still must pass a vote of Georgetown’s board of directors, which is composed of 39 members who approve major university policy decisions. GUSA Senator Sam Dubke (SFS ’21) voted no in the Feb. 3 GUSA senate vote on whether or not to hold a referendum on a fee to benefit the descendants.

Dubke said though the vote has concluded, the debate about the proposed fee is ongoing.

“This fight isn’t over, because I don’t think that this election is over,” Dubke said in an interview with The Hoya. “There are individuals that are going to bring suits who made numerous complaints to the election commission.”

The referendum shared a ballot with GUSA’s April 11 senate election. The GUSA senate voted in favor of holding the universitywide referendum with a 20-4 vote Feb. 3.

GUSA elections have suffered declining turnout over the past few years. Recent GUSA executive elections in February saw the lowest voter turnout since the 2007 executive election, with 32 percent of the undergraduate student body casting votes. Overall voter turnout in the last senate election in October was 20.9 percent, according to the GUSA election commission’s Twitter account.

Previous referenda have never received votes from the majority of undergraduate students.

The university has not specified what actions it would take if the referendum were to pass.

“We’ll have to take that one step at a time,” University President John J. DeGioia said in a Thursday morning interview with The Hoya.

A Friday evening email from DeGioia to the university community acknowledged student support for the referendum, but also did not indicate if the university support the establishment of the reconciliation fee.

“With this strong indication from our students, I will engage key leaders in our Georgetown, Descendant, and Jesuit communities and our faculty, board, and student leadership to chart a path forward,” DeGioia wrote.

Despite yesterday’s historic vote, Georgetown will continue to grapple with its difficult legacy of slavery, according to Richard Cellini (COL ’84, LAW ’87). Cellini is the founder of the Georgetown Memory Project, an independent nonprofit that has located 8,298 direct descendants of the GU272 since 2015.

“Whether this referendum passes or not, the moral stain on Georgetown and Jesuit leadership can never be erased unless Georgetown gives restitution to these families,” Cellini said in an interview with The Hoya early Thursday afternoon. “Even if it takes 50 years, or a 100 years, these issues are not going to go away.”

This article was updated April 12.