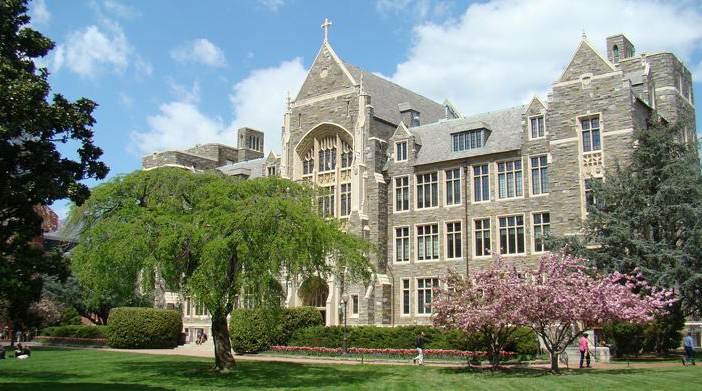 When Lauren Young (COL ’24) began feeling weak and seeing double last week, she rushed to the Georgetown University Student Health Center, where officials suggested she go to the emergency room.

“They gave me an IV because I literally couldn’t even keep my own head up off the chair. My whole body was tingling,” Young said in a Zoom interview with The Hoya. “I felt like I was on the verge of passing out for two hours.”

While Young was in the emergency room, university health officials texted Young asking where she had eaten in the previous 48 hours. On Sept. 22, she submitted a sample for testing. Young received a positive norovirus test Sept. 28, six days after submitting a sample.

As of Sept. 30, over 145 students, faculty and staff have reported symptoms to university health officials that are consistent with norovirus. Furthermore, university health officials have confirmed the absence of salmonella poisoning on campus. Students like Young say they are now experiencing delays in receiving test results when presenting symptoms consistent with norovirus.

Norovirus, which typically spreads between November and April, is a highly contagious virus that causes vomiting, stomach pain and diarrhea. The virus, which is common on college campuses, can be transmitted between people or through contact with contaminated surfaces, food or water.

When contacted for comment, a university spokesperson directed The Hoya to a public health incident page.

Thomas Leonard (COL ’22) found himself in the George Washington University Hospital emergency room Sept. 21 after collapsing because of excessive vomiting and dehydration.

“I’ve never been that sick before, and I would say — a conservative estimate to say that I threw up at least 10 times,” Leonard said in a phone interview with The Hoya. “And it got to the point where there was nothing left in my body to throw up and I was throwing up just bile and just dry heaving, and I passed out just because there was literally nothing in my body and I collapsed.”

Although the hospital suspected he had food poisoning, Leonard said he thinks he may have caught norovirus instead. Leonard said he submitted a stool sample Sept. 24 at the request of the Georgetown Public Health team; as of Sept. 30, Leonard has not received an update on his sample from public health officials.

The university encourages students to take extra precautions to prevent the spread of norovirus, according to the incident page.

“We continue to encourage members of our community to stay hydrated and practice good hand hygiene, washing frequently with soap and water. If you are unwell, please stay home, avoid social gatherings and events, and do not attend class or arrive for work,” a Sept. 26 update to the public incident page reads.

After identifying at least two individuals with norovirus, university officials took steps to mitigate the spread of the virus on campus, including contacting officials from the Washington, D.C. Department of Health and increasing sanitization of high-contact areas in residence halls and dining halls on campus, according to the incident page. As of Sept. 30, the university confirmed that an undisclosed number of samples tested at the MedStar Georgetown University Hospital confirmed the presence of norovirus, according to the incident page.

While Leonard appreciates the university working to address the outbreak on campus, he said he is still anxious over the spread of the illness, as well as the delay in test results.

“It’s concerning that there’s no immediate answers available to the student body, but again, I do appreciate that the administration is working hard to get those answers as soon as possible,” Leonard said.

Students with norovirus-like symptoms are also being asked to quarantine. Students can request food and water delivery by attesting to their symptoms on GU360, an app used by the university to administer daily COVID-19 symptom screenings.

Leronard said he is anxious for the outbreak to die down soon.

“I would prefer never to go through anything like that again, but as far as sort of a timeline of when it’s safe to eat on campus, it’s very nerve-racking,” Leonard said.

This article was updated on Oct. 5 to accurately reflect the nature of student claims regarding delays in norovirus testing.