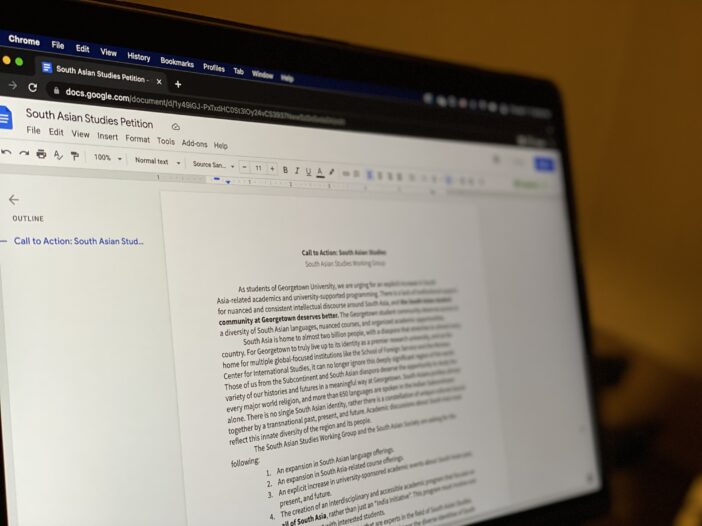 More than 240 students have signed on to a petition urging Georgetown University to expand South Asia-related curricula and institutional support.

South Asian students deserve the opportunity to study their diverse heritage at Georgetown, the petition says.

“Academic discussions about South Asia must reflect this innate diversity of the region and its people,” the petition reads.

The university currently offers 14 languages that students can pursue as a major or minor, none of which are South Asian. Next fall, students can take coursework in Sanskrit and seven Hindi classes, according to the fall 2022 class schedule.

Despite South Asia being home to hundreds of languages, the university has failed to expand offerings to include South Asian languages, Harapanahalli said.

“South Asia has over 650 languages. It has every single major world religion. It has a history stretching back to the first civilizations. Yet at the best institution for international relations, there is almost nothing for a structured and long-term degree program or certificate program,” Harapanahalli told The Hoya. “My freshman fall, there were no South Asian languages offered.”

According to the MyAccess records of the fall 2020 course offerings for undergraduate students, Georgetown did not offer any South Asian language courses.

Professor C. Christine Fair, who was the first professor to sign the petition, said this effort is a step in the right direction.

“This is the first real show of force among our students, the first and most significant push towards the university leadership,” Fair told The Hoya. “I’m here to support it. I’ll do everything I can to support these students.”

However, Fair said language expansion efforts can be complex and costly, requiring student commitment to enroll from the introductory level until reaching proficiency.

“We have an obligation to get those who want proficiency to proficiency, and you can see how that’s a geometric expansion of manpower with each additional year,” Fair said. “To get the university to invest in that commitment, we need students who are going to vote with their feet and take those classes.”

The petition also calls for the creation of an interdisciplinary academic program that would focus on all of South Asia. This program, according to the petition, should replace Georgetown’s “India Initiative” which only advances research and teaching around India with relation to global affairs.

Georgetown is committed to exploring course options that reflect the broad interests of students, according to a university spokesperson.

“Georgetown thrives by sharing our extraordinary range of life experiences and learning from our differences, and is committed to making sure that campus programs and services respond to the needs of all students,” the spokesperson wrote to The Hoya.

The university is working to increase South Asian course offerings, as well as creating a more diverse faculty, according to the spokesperson.

“Our Asian Studies program recognizes the need to deepen engagement with the South Asia region and is actively working on efforts to expand our course offerings, convenings and opportunities to understand the critical importance of South Asia to global affairs,” the spokesperson wrote.

Professor Shareen Joshi, an India and South Asia scholar, said the petition will show the university how much student support there is for South Asian studies.

Harapanahalli said it was meaningful to see so much support from students and faculty for South Asian studies.

Joshi said the student and faculty support is there, and that the university has the resources to make this change.

“We have the expertise, we have pretty much everything we need to do this,” Joshi said. “When the will is there, I believe it will happen.”

This article was updated on 4/8 to remove a quote for factual concerns.