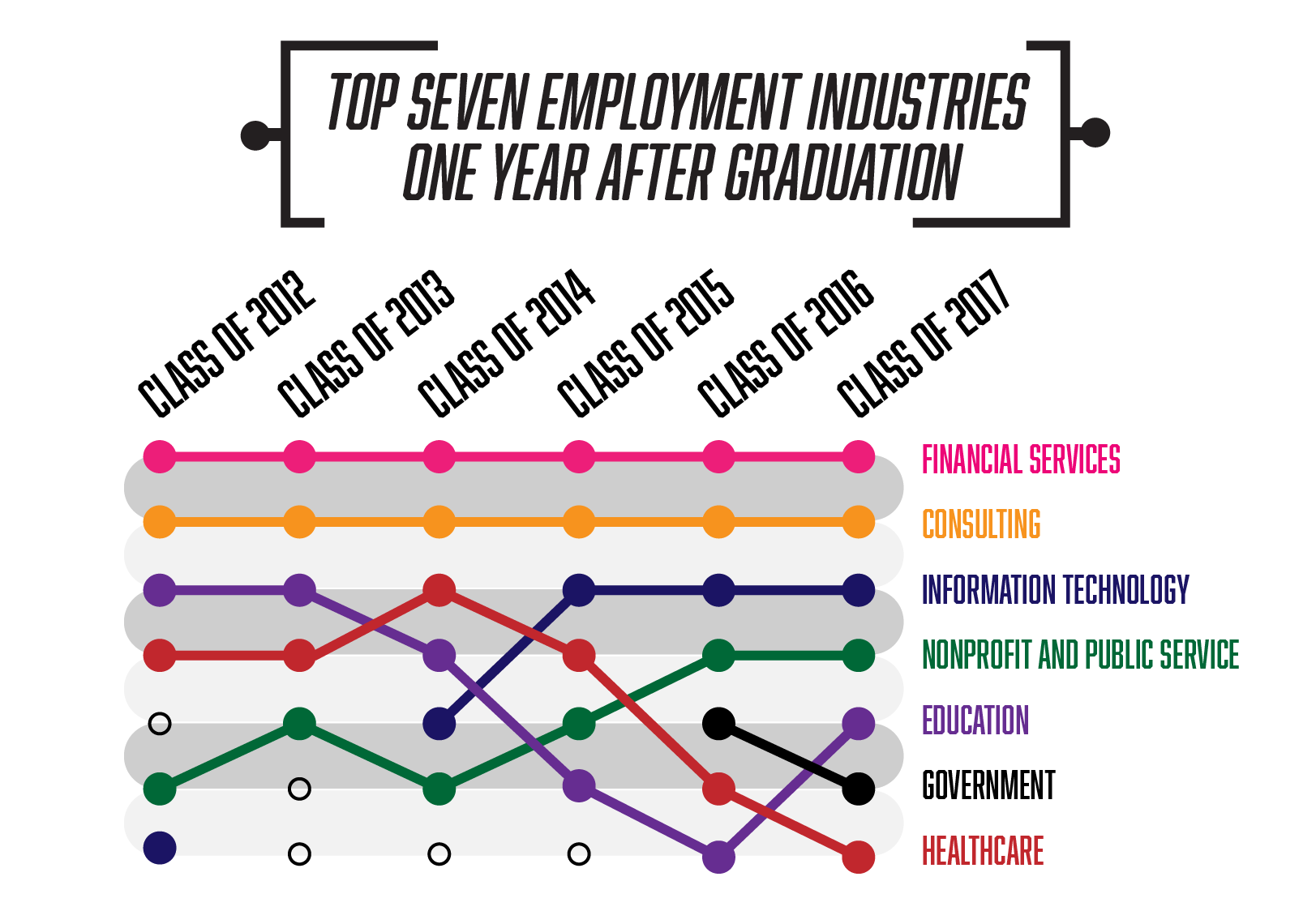 Consulting and finance typically dominate the employment outcomes for Georgetown graduates. Yet both students and faculty seek to expand the horizons of students exploring the job market.

One year after graduation, more than 21 percent of the class of 2017 was working in the financial services industry alone, according to data published in the Cawley Career Education Center’s First Destination Report, which surveys graduates and publicly available employment information.

Over 70 percent of the class of 2017 was employed full time within one year of graduation, mirroring a similar trend of previous years. Finance and consulting were the top employment destinations for the class of 2017, followed by information technology and services, education, government and health care. Financial services and consulting industries have consistently hired over 40 percent of fully-employed graduates over the past seven years.

Consulting, financial services and health care have consistently been the top employers for the School of Foreign Service, McDonough School of Business and School of Nursing and Health studies respectively since 2012. In the College, consulting has steadily risen as a top employing industry while education fell precipitously, from above 20 percent of fully-employed graduates in the class of 2012 to less than 10 percent for the class of 2017.

Some students attribute the popularity of consulting and finance to the flexibility and challenges offered by those fields, but others cite pressure to enter those industries from a culture driven by prestigious firms and their early recruiting practices. Although the majority of students find jobs outside of financial services or consulting, students and faculty recognize that Georgetown students might benefit from exploring a wider array of career opportunities.

To many students, working at a consulting firm after graduation is a way to gain exposure to a variety of industries.

Andrew Zhan (MSB ’20), who plans on interning for the financial services division of PricewaterhouseCoopers, looks forward to learning about different business structures.

“I definitely chose consulting to get a broad range of experiences because in consulting you work with a bunch of different clients across a bunch of verticals,” Zhan said. “So, I think consulting was a good path for me to get my foot in the door in a lot of these different industries.”

A post-graduation job in consulting can often prepare graduates for other kinds of work, according to Susan Campbell, the director of Cawley.

“‘Consulting’ is a pretty broad term,” Campbell wrote in an email to The Hoya. “Some of the graduates who end up in consulting are doing federal consulting, which is often a first step in a career in government service.”

However, some students may be attracted to the prestige of consulting and financial firms rather than the work itself, according to Zhan.

“I think that the deeper issue is that people want the clout and prestige from these firms,” Zhan said. “Georgetown students in general seem to want to be high-achieving individuals and going to a Goldman Sachs, JPMorgan or McKinsey and Bain will fulfill that prestige.”

Many banks have already started recruiting sophomore students this spring for internships for the summer of 2020. Alec Camhi (COL ’20) thinks that early recruiting practices not only force some students to make hasty decisions, but can also hurt firms seeking to find qualified applicants.

Cawley itself has pushed back against the early recruiting timeline. In a Nov. 19 public letter to financial services firms, Cawley stressed that second-semester sophomores are still exploring majors and career options. The letter requested that firms looking for interns for the summer of 2020 wait to begin interviewing until the end of the academic year.

Yet Zhan knows students seeking finance internships even before their sophomore year.

“I know freshmen that are going to recruitment events trying to finesse their way into a bank in their freshman year summer,” Zhan said.

While intensive recruiting practices could create the impression that Georgetown graduates only pursue careers in finance and consulting, the majority of graduates find jobs outside of those fields, according to Campbell.

Camhi said Georgetown students should not underestimate the worth of public service internships despite their demand.

“When someone is interning on the Hill, the reaction is ‘Oh, that’s classic Georgetown,’” Camhi said. “We shouldn’t lose sight of the face that interning for the United States Congress is a privilege that a lot of people don’t get.”

Since the beginning of the academic year, Cawley has hosted more than 50 events with other campus bodies and groups that explicitly do not focus on finance or consulting, according to Rebecca Cassidy, associate director for employer relations at Cawley. Some of these events include widely-attended career fairs, such as the Government, Education and Nonprofit Career Fair which regularly draws over 900 students, according to Campbell.

However, some students feel as though Cawley provides inadequate resources for exploring different career paths. Caitlyn Brandon (NHS ’20) learned much from a Cawley event on nursing specialties but has had trouble finding additional support for pursuing a career in nursing.

“Otherwise, I have no guidance in how to look for jobs,” Brandon wrote in an email to The Hoya.

“I do understand the Career Center is trying to show other opportunities but when I go onto the website and I click on the events tab on Handshake, all of the events I see are just finance or consulting related,” Liu said. “It’s a huge let down to me.”

University deans have started to recognize the lack of student engagement at Cawley. Many students have not even interacted with the Cawley at all, according to Sue Lorenson, vice dean for Undergraduate Education for the College.

“Many students have never visited the career center, have not opted in to an industry-specific newsletter, and haven’t signed up for a consultation or workshop,” Lorenson wrote in an email to The Hoya.

Camhi has not felt the need to rely on Cawley’s resources and generally finds his own career opportunities.

“This isn’t a knock on the career center, but I just haven’t really utilized their services that much,” Camhi said. “In general, I’ve just done my own networking to find my way.”

Yet other students who engage with Cawley seem happy with their services. Shine Aung (SFS ’21) said the staff were helpful when navigating career options ranging from journalism to law.

“They have been very helpful in giving me many tools to look at — different websites and different people to reach out to,” Aung said. “For each path I’ve considered they have offered resources for me to look at, which I think is very helpful.”

The university’s undergraduate schools have also taken steps to introduce students to a broader range of career options, such as nonprofit work.

Gary Xie (SFS ’19) attended a coffee chat with Scott Guggenheim, an anthropologist who has worked in international development for 25 years. He felt the talk offered meaningful guidance for his career aspirations.

“The coffee chat really opened up my horizons to see how my Georgetown experience could be  applied to have real-life policy implications,” Xie said.

The McDonough School of Business’ Undergraduate Office of Professional and Leadership Development has established programs to introduce students to different industries. “Host a Hoya” is a program that allows students to shadow alumni in their workplaces, while “Fridays in the Field” let students spend a day in various workplaces in the Washington, D.C. area.

In the College, Dean Thom Chiarolanzio worked to establish a pilot program called the “Social Responsibility Network” in January 2019 to connect current students with alumni who work in nonprofit and education sectors.

Byman believes that Georgetown students should ultimately chart their own career paths while using guidance from faculty and building networks with their peers.

“Students will, and should, make their own decisions, but we hope that faculty, alumni, deans, and career services staff will be there to help,” Byman wrote. “We also hope students will form networks and otherwise help one another advance and find a fulfilling career.”