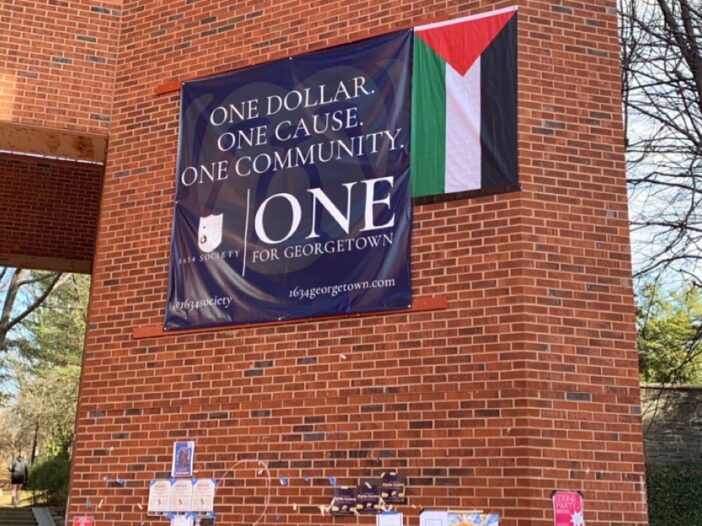 Georgetown Students for Justice in Palestine (SJP) hosted their annual Israeli Apartheid Week to stand in solidarity with the people of Palestine and raise awareness about the human rights abuses they face.

The event, which was held from March 14 to 18, featured events regarding advocacy for the people of Palestine, beginning with an Apartheid Week launch in Red Square. Other events included a tile painting event and a panel discussion on March 17. There was also a Palestine Gala on March 18, which featured music, food, art, dabka — a Palestinian dance style — and other performances.

Israel has systematically discriminated against Palestinians who live under Israel’s rule in the Occupied Palestinian Territories (OPT), according to a report by human rights group Amnesty International. Israel has also forcibly displaced Palestinians through coercive measures, including home demolitions.

Last month, Amnesty International named Israel an apartheid state due to its treatment of Palestinians. Apartheid is a crime against humanity under international law. In the report, Amnesty said Israel has enacted laws that create a system of control over Palestinians.

SJP planned Apartheid Week to increase awareness about the Palestinian freedom struggle, according to an anonymous member of MSA and SJP, who requested their name be withheld due to safety concerns.

“We’re just hoping to change the views that people have and get more people educated about what’s really going on over there,” the MSA and SJP member told The Hoya.

Georgetown SJP operates under Students for Justice in Palestine, a worldwide network of college activism organizations.

GJI Director Melyssa Haffaf said that GJI chose to partner with SJP to host the event to raise awareness about what is happening in Palestine.

“We believe it was a great educational forum for those who are not necessarily familiar with the history of this ongoing struggle and bring visibility to other movements striving for advancing justice and equity,” Haffaf wrote in an email to The Hoya.

A SJP representative, who asked to remain anonymous due to fear of the risks of public Palestinian advocacy, said the involvement of many student clubs in the week of events signals a shift in perspectives on the issue.

“So many organizations showed support, and that would have been unimaginable a few years ago — it really shows growth in this movement and the way that people are looking at Palestine as a smaller part of a bigger, interconnected problem that we need to solve,” the SJP representative said in an interview with The Hoya.

Khury Petersen-Smith, a fellow at the Institute for Policy Studies and an expert on the Middle East, spoke at the Apartheid Week panel.

He and other panelists framed the issue in an innovative way, Petersen-Smith said.

“In the panel, we worked to lay out why we understand this as a struggle for justice not only in terms of justice for Palestinians, but in the context of various struggles around the world,” Petersen-Smith said in an interview with The Hoya.

Idun Hauge (GRD ’24), decided to join SJP last week after hearing about Apartheid Week from a friend on the SJP board.

“There’s very little awareness in the U.S. about crimes against Palestinians, the really kind of horrible conditions that people live under,” Hauge said in an interview with The Hoya.

Last week Georgetown SJP circulated posters promoting the week of events around campus, according to the MSA and SJP member, which were subsequently removed from Red Square by unknown individuals.

“That was definitely the most unsettling thing that happened in our week, having our advertising and pretty much our freedom of speech restricted by certain students on campus,” the MSA and SJP member said.

Georgetown is committed to free and open inquiry on campus through verbal and nonverbal expression. Some areas on campus, including Red Square, are considered “public squares,” spaces available for student expression without registration requirements.

After the investigation of the Georgetown University Police Department into the ripping down of posters, SJP was able to identify one student who ripped down posters, but the organization chose not to disclose their identity to The Hoya.

“On our Hilltop campus, Red Square is uniquely located as a public forum expressly designed for the impromptu and ongoing expression of ideas and viewpoints by members of our campus community,” the email reads.

“As Georgetown students, it is essential that we support and actively defend each other’s right to free speech,” Rogov wrote to The Hoya.

Still, GIA stands against the actual messaging of Apartheid Week, according to Rogov.

“Classifying Israel as an apartheid state is not only incorrect, but dangerously misinformed,” Rogov wrote. “This misinformation is counterproductive to promoting genuine reforms in Israel, and has the potential to harm Israeli citizens of all religions and ethnicities in undermining the nation’s legitimacy.”

The MSA and SJP member said the event was a success due to high student engagement.

“We definitely did have a few people who passed by who clearly expressed some disagreement, some people secretly recording us, but for the most part it was positive responses,” the MSA and SJP member said.

UPDATE: This article was updated March 30 to retract the identity of the source now referred to as the “MSA and SJP member.” The source requested anonymity on March 29 due to the fear of safety risks surrounding public Palestinian advocacy.