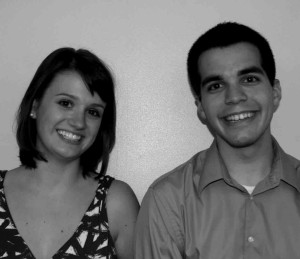 *Many students at Georgetown spend much of their free time on extracurricular projects, but few take on a project as daunting as the [North American Invitational Model United Nations Conference](https://www.modelun.org/naimun), the largest student-run high school model United Nations conference in the world, which is hosted annually by the Georgetown International Relations Association, Inc.*

*But that’s exactly what Ena Dekanic (COL ’11) and Matt Shapiro (SFS ’11), the two conference executives for the 47th edition of NAIMUN, have decided to do with their time. The numbers speak for themselves: 2,800 delegates from countries all over the world, 180 Georgetown students coordinating the conference, and a $10,000 marketing goal. Dekanic and Shapiro say they’re up to the task, and share their thoughts and goals with The Hoya.*

**What are the responsibilities that come with your positions?**

**Dekanic:** Together with Matt, we are in charge of organizing and managing every aspect of the conference. As the secretary-general of NAIMUN XLVII, I focus on the most substantive planning for the conference and oversee all of the committees. This year, we have 36 committees, including many of the traditional Model UN committees as well as some more innovative committees like the estates-general in 1789 and the Majlis (Iranian Parliament).

This year, for the first time, I’m helping to organize a NGO [non-governmental organization] forum, which will simulate the pivotal role of NGOs in the international community.

**Shapiro:** As executive director, I primarily take care of the logistical stuff for the conference, and my staff of six is working to make sure all the preparations for a conference of this size are made.

Two NAIMUNs ago, we decided to start partnering with different charities. Last year it was Oxfam and we raised $10,000 for it. This year, we chose Save the Children, and in addition to a candy sale we’re organizing, we are adding a pre-conference competition among schools to raise more money for Save the Children.

I also do programming and organize speakers for all the committees, and for marketing we have raised nearly $10,000 already. The conference is held at the Hilton [Washington] Hotel in Dupont Circle, so I work on those relations as well.

**How did you get started with NAIMUN?**

**Dekanic:** In high school, I participated in conferences as a delegate, but decided I didn’t want to do that in college. As a freshman, I was interested in NAIMUN and applied for a freshman position on staff. I was lucky enough to jump right in to planning conferences, and as a sophomore moved up to director-general.

**Shapiro:** I did NAIMUN in high school, and in fact didn’t really know what Georgetown was until NAIMUN. I had a great time when I was here, and when I came to Georgetown, I knew I definitely wanted to work for this conference. Freshman year, I was a crisis manager, and sophomore year I was director of registration.

**What are some of your goals and initiatives?**

**Dekanic:** In addition to a lot of other things for the conference, we added Hilltop Madness, a brainchild of last year’s conference executives, Anupam Chakravarty (SFS ’10) and Omar Noureldin (SFS ’10). They were one of the forces really motivating us, and one of their initiatives was Hilltop Madness, a Friday night social event for the delegates designed to introduce the delegates to the diversity of social groups at Georgetown, and to show them there is so much more to Georgetown than Model UN. I do not think many other conferences have anything like this. We ultimately want the delegates to get the full-body experience while they’re here.

**Shapiro:** One of the things we’re pushing for is trying to embrace the goals of the International Relations Association: to bring international relations education to anybody, regardless of their socio-economic background.

This year, we’ve expanded our program significantly, and we’re trying to ensure that lower-income schools can be introduced to financial aid programs, completely paid for by marketing money. This has turned out quite well, and Joan Xie (SFS ’12), our director of marketing, has done a lot of work to make sure we’re approaching new sponsors and thinking of innovative ways to advertise. We have a corporate sponsorship with The Economist, just to name one.

I’m hoping we can ultimately exceed our marketing goal of $10,000. What we also are trying to do is institutionalize the inspiration from past years. We want to make sure the legacy of NAIMUN is ensured, and that in future years they can even be surpassed. We want to hear that every year it’s a better conference.

**How many hours per week on average have you spent on NAIMUN?**

**Dekanic:** We were both chosen by the GIRA Board of Directors in March of last year, and we worked all throughout the summer, I would say 15 to 20 hours a week dedicated solely to NAIMUN.

**What are some of your main challenges?**

**Dekanic:** A lot of my job is just the sheer substantive work that it takes to turn out a conference. And a large part of that is being a motivating force for the staff. Last year, both [Chakravarty and Noureldin] left huge shoes to fill, and it’s really important to make sure staff is as motivated as we are and have everyone as invested as they can be.

**Shapiro:** Last year, I was relatively independent as director of registration. This year, I’ve had to adjust to a leadership role that has extreme consequences for the conference. I think I’m fitting into that well and I’m fortunate to have a fantastic staff and secretariat.

**What’s the most fun part of the conference?**

**Dekanic:** On the one hand, I think opening ceremonies is incredible, with 3,000 participants in one giant ballroom. But there’s also the experience of being with everything at 4 a.m. after not having slept, when everything that’s said becomes funny, and there’s nothing you can think of that you’d rather be doing than this.

**Shapiro:** When NAIMUN becomes a full time job, we’re at the hotel the entire week before, and when everyone comes in on Thursday, all the hard work comes to fruition. Thousands of delegates arrive for this thing that you and 100 some people produce, and it’s a lot of fun to see this happen. To give a quick shout-out, our general interest meeting is at 8:15 [p.m. on Wednesday] in White-Gravenor Hall 201A. If you’re interested in joining, please come by.