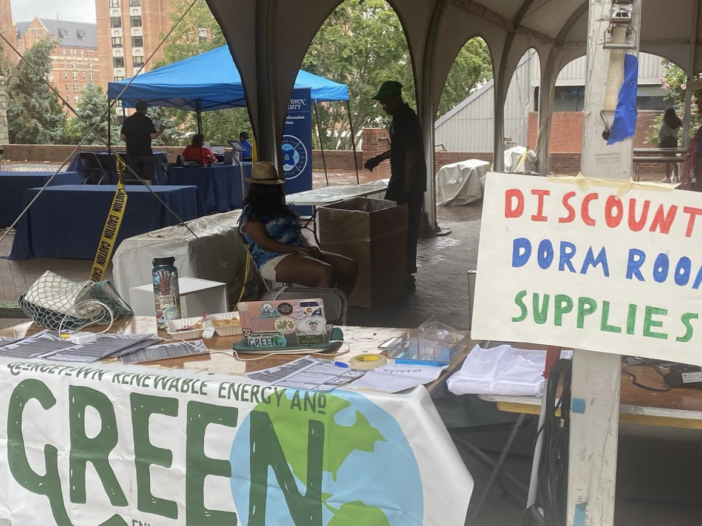 Georgetown University students sold a variety of dorm items, including used rugs, fridges and shelves, diverting nearly 500 pounds of waste during a used dorm item pop-up sale over the course of three days during the Fall 2022 semester move-in.

Brooke Hodge (SFS ’24), Stephane Granato (SFS ’24) and other members of the Georgetown Renewable Energy and Environmental Network (GREEN) collaboratively sold over 100 products and raised $1,500 during the sale, which ran on Aug. 19, 21 and 22.

Granato said the event helped reduce waste and increased the accessibility of clothing, school and dorm materials, which were GREEN’s primary goals for the sale.

“It gave people, especially students who can’t afford to buy all brand new stuff, access to more accessible dorm items at a more affordable price,” Granato said in an interview with The Hoya.

Half of GREEN’s earnings from the event will be used to eventually establish a permanent shop for reused supplies, called a REUSE shop, while the other half is being directly allocated to Georgetown Mutual Aid, according to Hodge.

“The overarching goal of the permanent REUSE shop would be to encourage a circular economy, significantly reduce waste, and increase the accessibility of clothing, school, and dorm materials on campus while raising money for local nonprofits,” Hodge wrote to The Hoya. “We also hope in the future that we will be able to pay student workers as this year, we relied on the volunteered time of the 7 grant recipients and friends willing to help.”

The Office of Sustainability initially suggested the idea for a dorm supply pop-up sale following the move-out drive at the end of the Spring 2022 semester when students donated supplies to be reused, according to Granato.

The pop-up was funded by GREEN’s Spring 2022 winnings of $500 from the Greens Commons Award, which is awarded to proposals that support discourse and action on environmental and sustainability issues in the Georgetown community, according to the Green Commons Awards’ values statement.

“We wrote a proposal to receive funding to collect dorm items, store them over the summer, and host a popup REUSE shop during fall move-in,” Hodge wrote. “After getting the funding we collected donated dorm materials and clothing during the move-out drive, transported and stored the materials in a storage unit, and transported them back to campus in the fall where we hosted the pop-up sale for 3 days during move-in.”

Granato said the pop-up served as a trial run to show that students would use and benefit from a permanent REUSE store.

“We’re hoping that the pop-up shop’s success is a proof of concept,” Granato said.

The biggest obstacle the group faces in trying to open a permanent store is finding a space on campus to operate out of, according to Granato.

“We’re looking at a few different options, but to be honest, it’s been really, really hard — we’ve been trying to get a space for a long time,” Granato said. “It’s still up in the air, and we may also try and establish ourselves as our own nonprofit. We’re kind of exploring a lot of different options right now.”

The Center for Student Engagement also prohibits GREEN from selling items for profit as an organization, so the permanent shop will not be able to be directly affiliated with GREEN, according to Hodge.

“GREEN members will be working outside of the club to develop a proposal and long-term plan for the development of an eventual permanent REUSE shop,” Hodge wrote.

To bypass this issue in the past, GREEN has partnered with The Corp for their thrift shop efforts. The group worked with Georgetown Mutual Aid and The Corp last year to develop Uncommon Threads, racks where used clothing and accessories are sold in The Corp’s Uncommon Grounds and Hilltoss, according to Hodge.

Granato said student demand for used items is irrefutable, and a permanent REUSE store will benefit the student community.

“We think the demand is really clear, people love the store,” Granato said. “I think it serves a great purpose, raising money for charity, for mutual aid on campus, but also giving students access to used items and also promoting sustainability.”