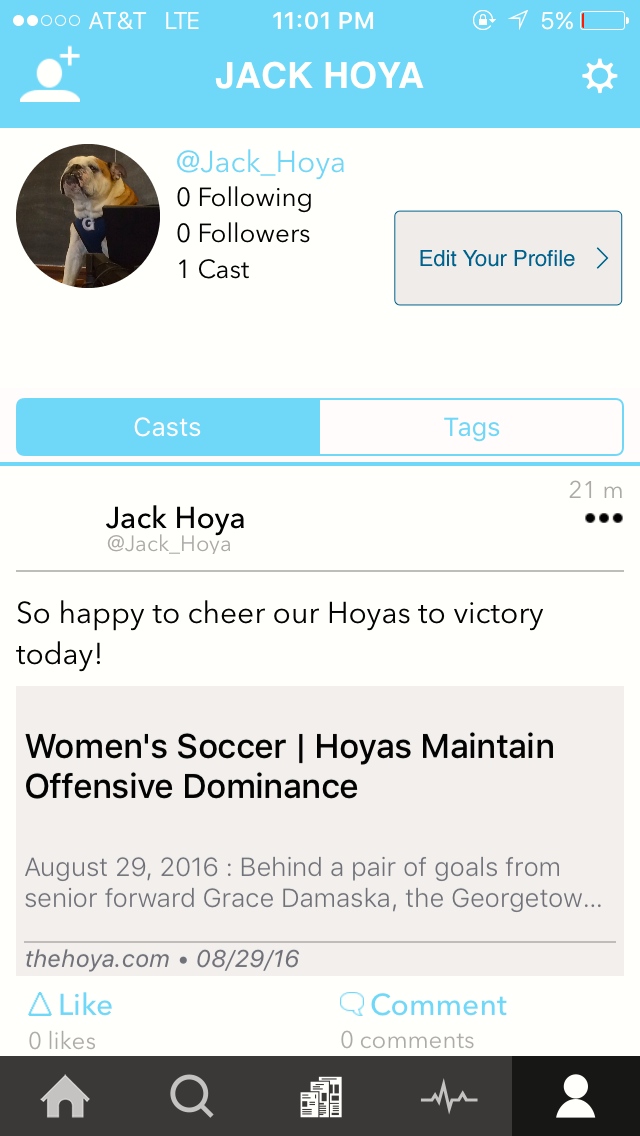 Bitter and defeated after a long, losing night of poker, freshman roommates Anthony Marshi (COL ’18) and Michael Fiedorowicz (COL’18) returned to their room in Darnall Hall on a chilled night in December 2014. As the two began conversing while scrolling through their Facebook newsfeeds, they saw that an article shared by a friend was buried among other trivial posts.

The two had no idea that this casual winter night of bad luck would propel them to create a startup that would come to fruition during their third year at Georgetown. From there, the two roommates’ collective intuition was unleashed in a flurry of inspired deliberation. By 9 a.m. that morning, after over six hours of discussion, the idea for NewsRoom — a social networking news mobile app officially launched earlier this week — was born.

NewsRoom’s platform allows its users to create profiles on which they seek out, post, react to and comment specifically on news articles alongside their peers.

According to Marshi, who is now CEO of NewsRoom, the app, which garnered approximately 100 users within its first 24 hours online, is made for people who wish to explore and debate current events without the added distraction of other media that appear on a Facebook newsfeed.

The user interface of the new app can be compared to that of Instagram, where new members create a profile within which they can post their own content with commentary, “follow” friends and others to see their posts and “like” and comment upon the posts of others. NewsRoom’s distinguishing feature lies in the fact that instead of sharing and reacting to pictures and short videos, users are socializing over news articles drawn from more than 300 publications.

Pulling from the RSS feeds of media outlets from CNN to The Hoya and The Onion, the app allows its users to access a vast collection of thousands of articles, which they can easily filter by topic and issue areas for streamlined browsing.

Currently, only users from three universities — Georgetown, Harvard University and Babson College — are allowed to create profiles. Marshi and Fiedorowicz collaborated with students from Harvard and Babson to develop the app.

Marshi explained that this university-only policy is a concerted effort to create an organic foundation of users within NewsRoom based on the social circles naturally formed by college students.

“We want to scale at universities because a university has a lot of kids who already know each other,” Marshi said. “So when one downloads the app it’s going to more likely spread by word of mouth.”
Similar to Twitter and other sites, the app also features a verification component by which certain qualified users like professors and organizations within universities are granted the status of NewsRoom “anchors.”

“They’re supposed to act as the experts — the news experts — the people who can give you good insight on news,” Marshi explained. “So we highly encourage NewsRoom profiles to follow anchors.”

On Georgetown’s campus, organizations such as The Caravel and GU Women in Leadership hold “anchor” status. Associate professor of government Matthew Kroenig serves as entrepreneurship advisor to the NewsRoom team and is the only professor verified by NewsRoom at press time.

However, Fiedorowicz, now the Chief Operating Officer of NewsRoom, hopes that other professors will soon join the app and recommend that their students do the same.

“We’re also reaching out to professors in the hopes that … they can start using the app and getting their students on it,” Fiedorowicz said.

Along with two other co-founders who entered the partnership after the inception of the NewsRoom app and three other auxiliary partners, Marshi and Fiedorowicz compose the entire NewsRoom team. From its small beginnings, Marshi expressed his ambitions for the app, with plans to expand to other universities and to Google Play and eventually Android systems if the app takes hold where it has been introduced.

While NewsRoom is not yet profitable — having been funded in development from the savings of its founders — Marshi said he hopes to profit from the app one day, but that money is not his first priority.

Marcos Melendez (NHS ’19), who reads the majority of his news on Facebook, said that NewsRoom appeals to him as a way to keep informed and that it seems to hold promise because it caters to an unfilled niche in the market.

“I can see that it will probably go somewhere,” Melendez said. “It seems like an idea that hasn’t really been done before, but at the same time it feels like … there’s space for it, but no one has really filled it yet.”

Editor-in-Chief of The Caravel Andrea Moneton (SFS ’18) said she believes in the possibility of NewsRoom’s success due to the increased coverage that it provides her.

“I think it has a lot of potential,” Moneton said. “I really like the idea. At least for me, it fills kind of a gap in the way that I read the news.”