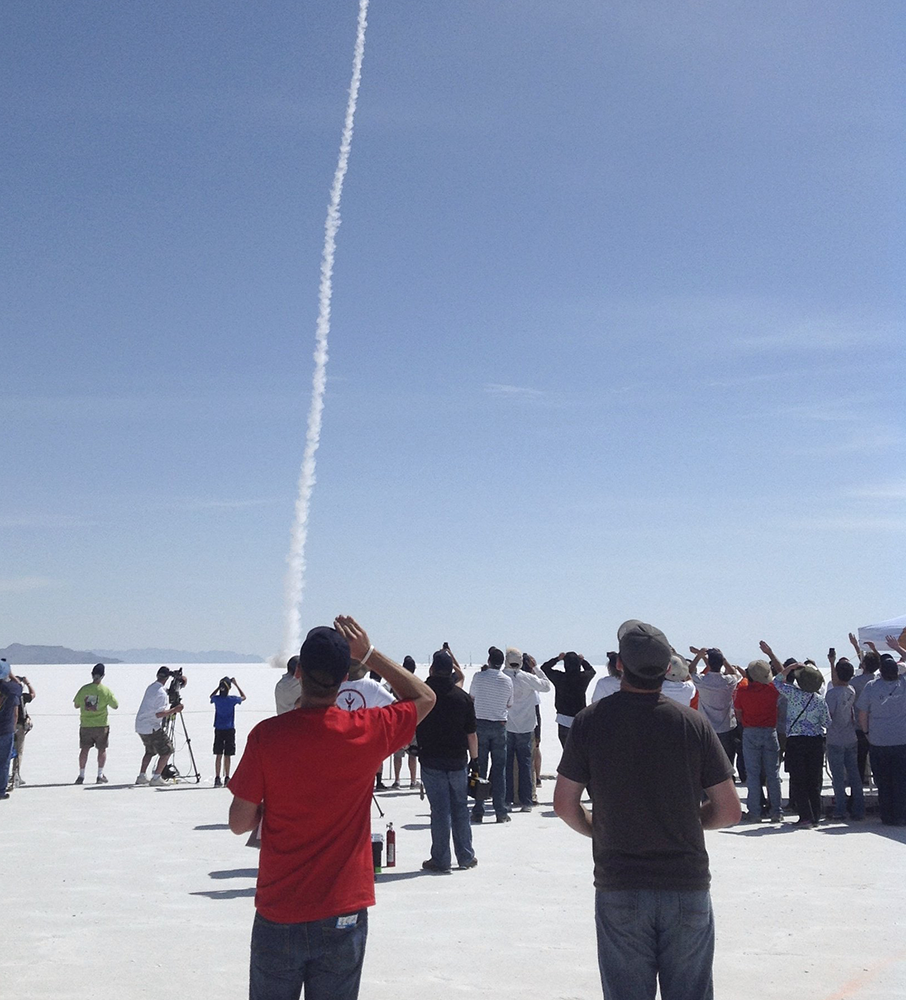 When Eric DeShields’ (MSB ’18) plans for a Georgetown solar go-kart racing club did not quite pan out, he decided to settle for the next best thing: a rocketry club. The Georgetown Rocketry Team officially launched this month, aiming to launch a student-built rocket a mile into the sky with the functionality of a fully recoverable launch vehicle. With the club, DeShields said he hopes to make up for a lack of science, engineering, technology and mathematics opportunities at Georgetown.

“If you’re interested in social justice or politics, there are a ton of clubs for students to join,” DeShields said. “I want this club to be the genesis of engineering and science at Georgetown because there aren’t a lot of applied science opportunities other than [the Georgetown University] Medical School.”

Though the club is not yet officially recognized by the university, the Rocketry Team submitted its first proposal for the NASA program this week under the guidance of Northern Virginia Association of Rocketry President Joe Woodford.

NASA’s Student Launch Initiative was created in 2012 as a competition for college teams to design, develop and write proposals to NASA, replicating the process private aerospace companies, such as SpaceX, undergo. The rockets in the program need to utilize autonomous ground equipment and GPS. The rockets also need to reach approximately 5,280 feet above the earth’s surface. The top university teams then launch their rockets at NASA’s launch facility in Huntsville, Ala.

Despite Georgetown’s lack of STEM clubs on campus, the Georgetown Rocketry Team is hopeful its proposal to NASA will be successful. Woodford — who also mentors various other high school and university teams — expects Georgetown’s proposal to go through, noting that previous NASA Student Launch Competition winner Vanderbilt University beat other schools with much more established engineering programs.

“This competition is a great way for students to see if this is an area they want to pursue in the future and for NASA to find future recruits,” Woodford said. “At the same time, this is not limited to students with strong science backgrounds — science and other skills are equally important.”

DeShields also said previous engineering experience is not necessary to join the team, which currently boasts 20 members. The club is divided into three sections: design and construction, finance and operations.

“Because rocketry is a pretty cut-and-dry science at this point, a lot of what we will be doing is an exercise in finance and organization,” DeShields said.

The team kicked off its operations with a meeting Sept. 9 that included a presentation of the NASA proposal for Woodford. Because the proposal was due Sept. 11, the team finalized the document in the first weeks of the fall semester.

“Since the club is still in its early stages, the meeting Wednesday was more like a Rocketry 101 meeting,” DeShields said. “But I have no doubt this club will be successful here at Georgetown. The secret recipe for success is the team-building process — and that’s what I hope they get out of it.”

The team currently plans on building 90 percent of the rockets at Georgetown in the physics department and launching them in Arlington, Va. D.C. law mandates that storing explosives within the District is illegal, so the combustible elements of the rocket will be assembled across the Potomac.

DeShields said that the physics department’s technical shop supervisor, Leon Der, is fully committed to helping the group and offering the university’s physics labs for the team’s use.

Rocketry Team Safety Officer James Heaney (COL ’16) said he has always harbored an interest in NASA and believes that the Georgetown community will be receptive to the new club.

“Georgetown is a place with a lot of bright minds, many of which are very competitive, so I think this club has that certain draw where if we can compete with other top schools in the nation and go toe to toe with them, especially in our first year,” Heaney said. “However, our school does not have the strongest STEM and engineering draw. … This is a great way to expand on what we have here, and I think what we are going to find is that we have a huge capability that people don’t realize yet.”

The team is currently accepting members and awaiting the competitive NASA Student Launch decision, which will be released Oct. 2.