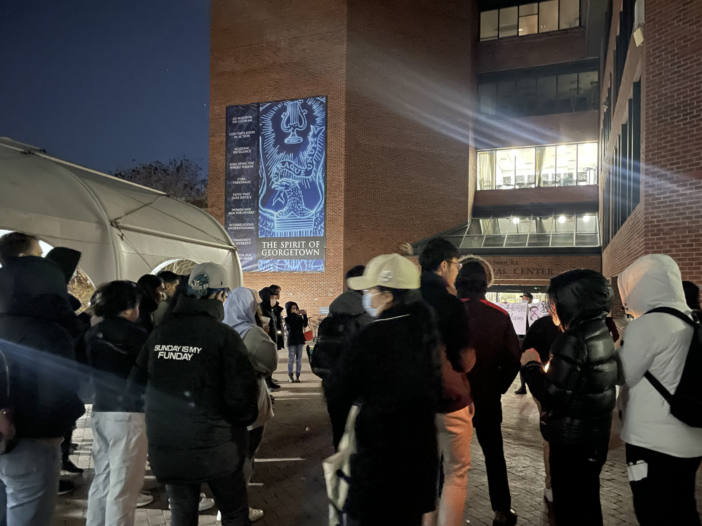 Georgetown University students held a vigil to honor the lives lost in an apartment fire that led to the deaths of 10 people in Xinjiang, an autonomous territory in northwest China that is home to the ethnic minority of the Uyghur people. Many have blamed the Chinese Communist Party’s (CCP) restrictive COVID-19 lockdown policies for the deaths.

Over 50 community members gathered in Red Square on Nov. 30 to commemorate the lost lives by lighting candles and holding up protest banners with slogans like “Stop Lockdown, Free China” and “We Demand Freedom Now.” Since the tragedy, which killed 10 and injured nine, a wave of protests has occurred around the world and, more notably, inside China itself, a rarity in the state considering potential government retaliation.

Beijing has arbitrarily detained over one million Uyghurs and other Turkic Muslims since 2016, according to the Human Rights Watch. Detained individuals report experiences of torture, sexual abuse, cultural persecution and high level surveillance in the CCP’s reeducation camps, according to the Council on Foreign Relations.

“The zero-tolerance COVID policy has been an abominable policy. And that combined with the persecution that’s going on in Xinjiang makes it practically doubly as condemnable in front of the CCP,” Xuan told The Hoya.

Yen-Han Chen (COL ’25), a Taiwanese national, said he appreciated the opportunity to practice freedom of speech at the Red Square protest.

Chen said he participated in the vigil to pay his respects to the victims and express his discontent with the CCP.

“Whether you’re Taiwanese, Hong Kong or anything else, Chinese state violence has always faced someone,” Chen told The Hoya. “And I’m so glad that right now there’s more people who see this as a serious issue, the harm that it causes.”

Chen said a familial history with CCP corruption sparked his interest in the issue.

“For me, the reason is a little more personal. I never got to meet my grandfather. He was a nuclear scientist, and he contracted cancer, likely from his line of work, and there was very little transparency. So I guess, in a way, there’s always this sort of resentment with a state that devalues human rights and human life,” Chen said.

Several demonstrators also spoke about the importance of public expression and told their own personal stories. One Uyghur graduate student, who asked not to be named in order to protect their identity, said their family witnessed the chaos that erupted in Xinjiang the night of the fire.

David Song (COL ’26) said the global social media attention on the state’s abuse against Uyghurs prompted him to attend the protest.

“I’ve been following all the protests and the situation on social media,” Song told The Hoya. “I follow a couple of accounts that have posted protest visuals from various cities across the world.”

As dissidents of the CCP often face serious penal consequences, many attendees at the Georgetown vigil wore masks to conceal their identities.

One international student from China who attended the demonstration, but declined to be named, said they are optimistic about the future of global intervention in China.

“I’m so glad there’s so many people out here to commemorate this tragedy,” the student told The Hoya. “There is racism and discrimination everywhere in the world. But as long as you have progress, as long as people care, that’s the first step to resolving it.”

Xuan said that even if the vigil cannot enact sweeping change, there is value in the shared experience of mourning and protesting together.

“The pessimist in me says that a couple of college students protesting on a U.S. campus somewhere, even if there’s some Chinese people there, might not have much effect,” Xuan said. “But I think maybe just drawing more eyes and ears to what’s going on in China is a benefit in and of itself.”