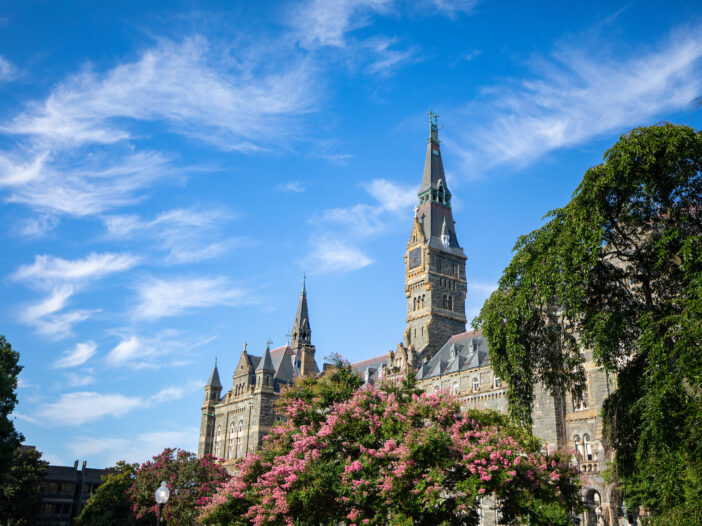 Over 500 Georgetown University community members have signed onto a pledge agreeing to withhold certain donations to the university until administrative officials address certain reproductive and family freedom demands.

The pledge was organized in response to the United States Supreme Court ruling in Dobbs v. Jackson Women’s Health Organization on June 24 that overturned the 1973 Supreme Court decision in Roe v. Wade guaranteeing a constitutional right to have an abortion. Georgetown’s law student chapter of the reproductive justice-focused group If/When/How and pro-abortion rights student group H*yas for Choice, who circulated the pledge, have called for campus community members to sign and pledge to withhold donations towards the university endowment and unrestricted items until the university agrees to provide a timeline for the implementation of a number of action items.

The pledge specifically calls on Georgetown University President John J. DeGioia (CAS ’79, GRD ’95), Georgetown University Law School Dean William Treanor and other university officials to address the action items listed within the document. Until they do so, the pledge’s signatories are set to maintain a non-binding pledge not to donate to unrestricted items or the university endowment.

“Our students deserve to learn and grow in a community that supports their family and bodily autonomy,” the pledge reads. “Georgetown has cowered on this principle for far too long, and the time to demand long-lasting change is now.”

The pledge calls for access to contraceptives on campus, providing funding for pro-abortion rights groups, events and classes, codifying access to online classes and virtual participation for parenting students and ending administrative support of the Cardinal O’Connor Conference on Life (COCC) as action items that must be addressed for signatories to end their no donation pledge.

A university spokesperson did not respond to multiple requests for comment ahead of publication.

“From being forced to provide an underlying medical condition in order to be prescribed birth control at the health center to being told that absences related to childcare and/or new parenthood are excused at the sole discretion of their professors, students are suffering because Georgetown isn’t doing enough to protect their fundamental freedoms,” Lippey wrote to The Hoya.

When asked to comment on the university’s position on abortion, a university spokesperson did not respond to the request for comment.

In a January 27 article, a university spokesperson told The Hoya that “Georgetown is firmly committed to the Catholic Church’s teachings and values, including those about the sanctity and dignity of life, and we strongly support a climate that continues to provide students with new and deeper contexts for engaging with our Catholic tradition and Jesuit identity.”

Lippey said past results warranted the need for more drastic steps to evoke a greater reaction from the university, thus leading to the idea of a no donation pledge.

“The idea was born from the treasurer of our organization, who manages our money externally from Georgetown because we (like H*yas for Choice) are not funded by the university,” Lippey wrote. “We’ve done petitions galore over the years and very little has worked up to this point to enact meaningful policy changes like the ones we are asking for — we figured that at the end of the day Georgetown is a corporation and the one thing that would demand attention the most is $ (or lack thereof)!”

The petition only applies to unrestricted donations and donations toward the university’s endowment, Lippey said.

Targeted donations that support Georgetown student financial aid and academic or public service programs in line with reproductive justice values are still encouraged, according to the pledge.

Organizers of the pledge hope with enough campus community support the university will be spurred to action, according to H*yas for Choice Vice President Lauryn Ping (COL ’23).

“We really believe that when donors refuse to donate in unrestricted gifts and to the university endowment, then the university can’t use that money to fund anti-choice groups and speakers,” Ping told The Hoya. “It also sends a message to the university that we’re not just going to sit by as they do all these anti-choice things, there’s going to be consequences for their actions.”

H*yas for Choice has not received university funding since 1992, when the university cited the club’s pro-choice advocacy as contrasting the university’s Catholic values.

Cameron Bresnahan (COL ’24), who signed the pledge, said it was a simple way to take action against the university’s anti-abortion rights stance.

“I have always been unsettled by Georgetown’s stance on abortion and found it to be one of the aspects of the university I was least proud of,” Bresnahan wrote to The Hoya. “Following the Supreme Court ruling I felt so angry and wanted to try and channel this anger, so, there was no better time to act upon my feelings about Georgetown’s approach to abortion.”

The pledge asks the university to respond within one month of receiving it with a formal outline of their plans to implement the demands.

If the university fails to meet the demands of the pledge, Ping said H*yas for Choice and If/When/How will take additional steps to pressure the university into change.

“We really want the university to show us a timeline of when they’re going to do all these things, in addition to saying yes to our demands, and then if, after a month, they don’t respond at all, we will escalate,” Ping said. “We do have plans on how we can put additional pressure on the university in order to get these demands met.”

Bresnahan said she hopes the university will pledge will lead to recognition from the university of the importance of abortion rights to the Georgetown community.

“I hope the importance of this matter to students, alumni, and staff will not only be recognized, but genuinely valued,” Bresnahan wrote. “I would like to see the administration act upon the demands outlined in the pledge immediately and unwaveringly.”

Lippey said she hopes the pledge will unite members of the campus community and drive the university to address these requests.

“Georgetown has been complicit in anti-choice policies for far too long, and it is critical that we build on the momentum of this moment to hold their feet to the fire,” Lippey wrote.