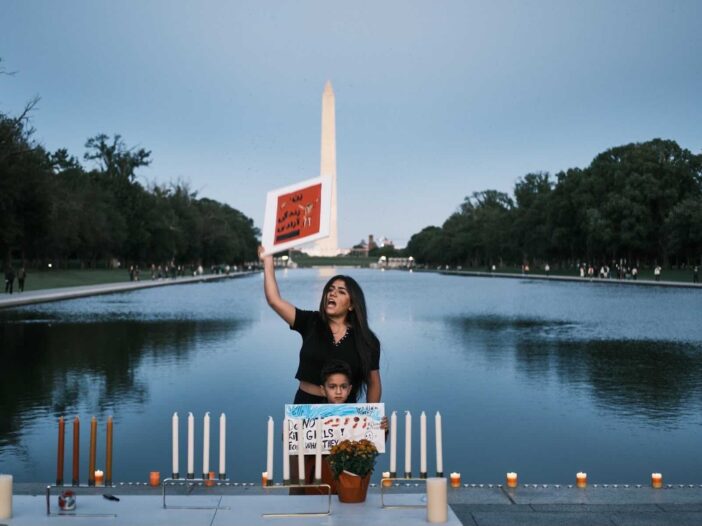 Georgetown University students staged a vigil to mourn and protest the killing of Mahsa Amini, a 22-year-old Iranian woman who was killed while in police custody for improperly wearing a hijab.

Since 1981, Iran has mandated that women veil their hair with a hijab in public. The Guidance Patrol, or “morality police,” is charged with enforcing this law and arrested Amini for improperly wearing her hijab on Sept. 13. Amini died three days later from unclear circumstances; police claim she suffered a heart attack in detention, but prisoners reported seeing police officers torture her and fracture her skull.

Melanne Verveer, executive director of the Georgetown Institute for Women, Peace and Security (GIWPS) and former U.S. Ambassador for Global Women’s Issues, said these protests differ from previous uprisings in Iran in that both men and women have been rallying against the government for women’s rights.

Verveer said Iranian womens’ rights are seldom spoken about worldwide the way they are right now.

“One of the things that always struck me, having worked for years and years in this area of women’s rights, is how little we pay attention to women in Iran and don’t know a whole lot about what’s happening to them and just how incredible they are, in terms of their own leadership to try to change their circumstances,” Verveer said.

The protests have since spread to Tehran and worldwide — at the Lincoln Memorial on Sept. 23, Bahar Ghandehari (COL ’23) organized a protest that began with a vigil and ended with a march to the White House while protesters chanted Amini’s name.

Ghandehari said she hoped the protest would help unite Washington, D.C.’s Iranian community and raise awareness about the circumstances of Amini’s death.

“It is extremely important to remind each other that we are not alone in times like this,” Ghandehari wrote to The Hoya. “At the same time, I wanted non-Iranians to learn about Mahsa’s killing and the protests in Iran.”

Ghandehari said many young people came to the protest, including numerous non-Iranian students from Georgetown and other local universities.

“It truly warmed my heart to see so many people come together and stand in solidarity with people inside Iran,” Ghandehari said. “We ended up marching to the White House after the vigil, and chanting Mahsa’s name in the streets of D.C. was so powerful.”

“This level of violence from Iran’s so-called “morality police” is not new,” Ghandehari wrote. “Another young woman’s life was cut short because of the Islamic Republic’s misogynistic and discriminatory laws.”

Nima Majidi (SFS ’23), the president of Georgetown’s Iranian Cultural Society, said Amini’s story is just one of many.

“Being a member of the Iranian diaspora means hearing these types of stories too often, and living in constant fear that the next person could be your loved one,” Majidi wrote to The Hoya.

Ghandehari said she hopes people continue to stay vocal and protest in the coming weeks and months.

“The most important thing right now is keeping the momentum going,” Ghandehari wrote. “I would love to see more students mobilizing and organizing demonstrations in Washington, D.C. Solidarity protests outside Iran are as important as those taking place inside the country.”