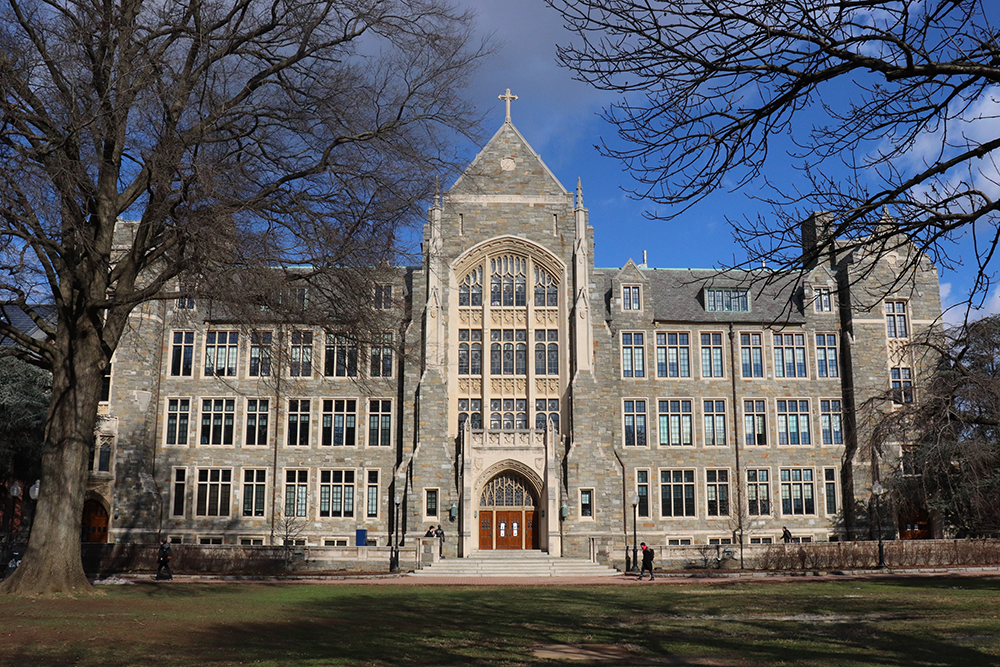 In the wake of the U.S. Department of Justice’s report that revealed a former Georgetown tennis coach accepted bribes from parents to guarantee their children admission, university students and professors speak out against inequality perpetuated within the college admissions process.

The college admissions bribery scheme highlights how socio-economic status plays a role in gaining admission to prestigious universities, according to Daniel Sulmasy, the acting director of the Kennedy Institute of Ethics.

“Because you have money does not mean that you deserve to go to Georgetown or Harvard,” Sulmasy said in an interview with The Hoya. “It sheds light on more of those kinds of problems in our society where super wealthy people think that the rules sometime don’t apply to them, that money can buy anything. It shouldn’t buy justice. It shouldn’t buy admission to Georgetown.”

Former Georgetown tennis coach Gordon Ernst fraudulently recruited at least 12 Georgetown applicants, many of whom did not play competitive tennis, to the Georgetown tennis team, according to a March 12 DOJ indictment. Ernst coached the men’s and women’s tennis teams from 2006 until December 2017, leaving the university in January 2018.

The indictment involves eight different U.S. colleges, with the DOJ bringing charges against 50 defendants. Among those charged are athletic coaches, parents of university students and administrators of college entrance exams engaging in fraudulent behavior. Five Georgetown parents were named in the indictment.

“We should be reminded that there are plenty of legal ways in which students are essentially ‘buying their way’ into universities, whether it be through their ‘legacy’ status, having wealthy donors for parents or having access to more resources to increase their test scores,” Ladao wrote in an email to The Hoya. “Students that may be coming from a first-generation low-income background don’t have any of this.”

The CMEA offers multicultural programming and academic support to students of racial and ethnic backgrounds that have historically found Georgetown inaccessible. Ladao is also a member of Georgetown Scholars Program, which provides support, advising, networking and mentoring to over 600 Georgetown undergraduates, most of whom are first-generation college students or come from low-income families.

College admissions fraud is an example of widespread societal cheating, a trend which should be condemned by all, according to Georgetown sociology professor Sarah Stiles.

“It’s not easy to live by one’s values, and that’s the point. It’s not easy. And when we know there are people who are cheating, and yeah they are gonna get a better grade because they cheated, does that mean you cheat too?” Stiles said in an interview with The Hoya. “If that becomes the norm and everybody is doing it apparently, you’ve got a rotten to the core culture.”

Prior to when the DOJ made the results of its own investigation public, Georgetown found that Ernst violated admissions policies during an internal investigation in 2017 and put Ernst on leave. The university did not encounter bribes or other criminal conduct in its investigation until contacted by the U.S. attorney, university spokesperson Meghan Dubyak wrote in a statement to The Hoya.

The university should be recognized for its work uncovering this misconduct, Sulmasy said.

“With respect to Georgetown, I was gratified to hear that we had as a university already recognized some of the improprieties regarding the former tennis coach’s activities,” Sulmasy said.

The 30 parents charged in the indictment include Elizabeth and Manuel Henriquez, Stephen Semprevivo, Elisabeth Kimmel, and Douglas Hodge, all of whom have or had children at Georgetown University between 2013 and 2019. Parents paid a fraudulent test proctor to oversee the SAT and falsified athletic records and admissions essays, according to the charges.

The university declined to comment on any disciplinary action against students who attend Georgetown and were admitted with fraudulent applications because of protection afforded by the Family Educational Rights and Privacy Act. Georgetown will review the U.S. attorney’s indictment and “take appropriate action,” according to university spokesperson Matt Hill.

“Some changes need to happen, not necessarily just by sending a letter, but I think the admissions office could come out with upcoming statements with changes in their policies and more transparency about what’s actually going on,” Sun said.

Although there is no indication that Georgetown was directly culpable in the bribery scheme, the indictment reveals the university has failed to promote a culture of integrity, a core St. Ignatius Jesuit value, according to Stiles.

“There is a good segment of the population that is mostly concerned with money and status and prestige and I think St. Ignatius would have a problem with that,” Stiles said. “Georgetown is a reflection of the larger culture. So I think that at Georgetown we need to highlight the importance of living truth, and that’s integrity, even if it means you don’t come out on top.”