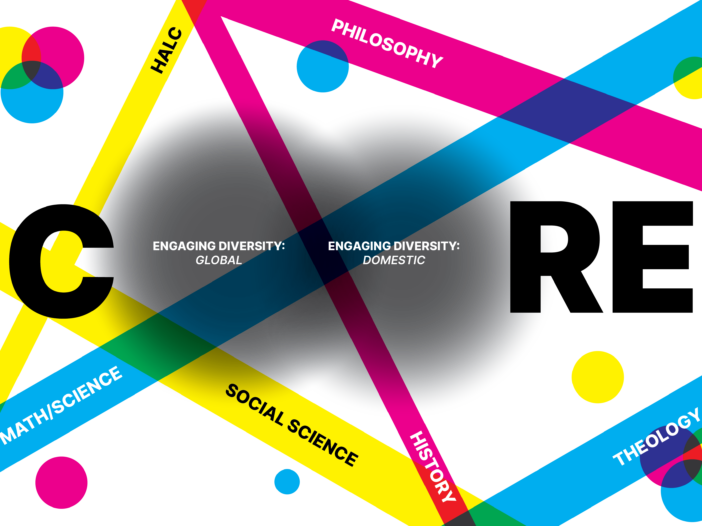 Since arriving at Georgetown University, Arjun Badami (COL ’24) has tried to take advantage of courses that focus on diversity and culture. So when he learned that his “The Problem of God” course satisfied the university’s engaging diversity requirement, he was surprised, since the vast majority of the authors on the syllabus were white.

“It’s a bit of a stretch to say that just because one of the authors in the course is not white, that the class is about diversity or satisfies the requirement,” Badami said in a phone interview with The Hoya. “It can’t be incidental. The class has to actually focus on diversity.”

Badami was also shocked to learn that one of his French classes fulfilled the diversity requirement. Being able to fulfill the requirement without really thinking about it struck him as concerning and not in the spirit of engaging with diversity.

“It’s not teaching you why diversity is important, why learning about other cultures and cultural pluralism and tolerance — why all of that’s important,” Badami said. “It’s teaching you how to speak French.”

Badami is not the only member of the Georgetown community who has noticed that students often inadvertently fulfill the core curriculum diversity requirement without much thought. Since this summer, the Engaging Diversity Curriculum Committee, composed of faculty and students, has been working to address that issue.

In 2015, the student activist group Last Campaign for Academic Reform (LCAR) lobbied for the creation of a curricular diversity requirement. The LCAR originally advocated for the creation of a core requirement called “Diversity, Power and Privilege,” which the group hoped would introduce students to the systems that perpetuate systemic inequalities experienced by different marginalized groups.

“There are a lot of great courses at Georgetown that touch on different aspects of identity, race, class culture, ability, sexual orientation — diversity in its true sense,” LCAR member Colleen Roberts (COL ’15) said during an April 2015 protest, according to The Hoya. “What we’re trying to do is to ensure that all Georgetown students will be exposed to the ideas that many of us are exposed to during our undergraduate career.”

But throughout the approval process, the Main Campus Executive Faculty (MCEF), a legislative body of faculty that determines academic policies, changed the focus of the requirement to emphasize identity and awareness rather than structural problems facing marginalized communities before approving it in its current form as the engaging diversity requirement in April 2015, according to Georgetown English professor Amanda Phillips, who is co-chairing the Engaging Diversity Curriculum Committee.

This requirement is part of the general core curriculum that all Georgetown undergraduate students must fulfill. The curriculum mandates that students take two courses from the engaging diversity course list, which is available on MyAccess.

One of these courses must address “global” diversity, and the other must address “domestic” diversity. Courses fulfilling the engaging diversity requirement are expected to help students engage with and reflect on different cultures, beliefs and ideas, according to a university spokesperson.

“We hope that by fulfilling the requirement, students will become better able to appreciate and reflect upon how human diversity and human identities shape our experience and understanding of the world,” the university spokesperson wrote in an email to The Hoya.

According to Georgetown’s course lists, some of these courses include “Race and Radical Feminisms,” “Bioethics and Disability,” “Introduction to African American Studies” and “Introduction to Indigenous Philosophy.”

Georgetown sociology professor Corey Fields currently teaches the course “Blackness as an Organizing Strategy: Black Participation in Post-Civil Rights Social Movements,” which counts for the domestic diversity requirement. The course provides engagement with the African American experience and links the struggle for racial equality to other political organizing in the United States, according to Fields.

“I hope that all other faculty who teach courses that meet the requirement are working to ensure that their classes are consistent with the spirit of the Engaging Diversity requirement,” Fields wrote in an email to The Hoya.

But other courses like “Rise of Rome” also count toward the requirement. So do lots of language courses, like “Advanced French Grammar and Writing,” “Advanced Spanish for Business” and “Intermediate Polish.” One “Introduction to Philosophy” course, which focuses on “the great Western philosophers,” also meets both the domestic and global diversity requirements.

The proposal for a diversity requirement was never intended to be an additional curricular burden for students, according to March 2015 MCEF minutes. At the time, the committee identified over 8,000 courses that could potentially meet the requirement.

“They want to do something meaningful and yet flexible, so no student needs to take one more course than they otherwise have to,” according to the meeting minutes.

“The engaging diversity requirement was first implemented when I arrived at the university,” Phillips said. “It felt like it was missing something.”

The engaging diversity requirement mandated its review after five years. To conduct this review during the 2019-20 academic year, the university established the Engaging Diversity Subcommittee, which was composed of 10 faculty members and two students and operated under the broader Core Curriculum Committee.

Students on the committee help identify and analyze the effects of the engaging diversity requirement, according to Sherry Linkon, a co-chair of the Engaging Diversity Subcommittee and a Georgetown English professor.

Along with the LCAR’s work in proposing the original diversity requirement, students in recent years have provided feedback and leadership to propose improvements to the requirement, according to Amanda Yen (COL ’23), Engaging Diversity Curriculum Subcommittee co-chair.

Students also served as interns on the data collection and analysis component of the committee’s review, which helped determine that the existing diversity requirement was too diffuse to be effective, according to Linkon. The registrar found that over 1,300 different courses had actually been tagged as fulfilling either the domestic or global diversity requirement since 2015, Linkon said.

“Students report that they’ve taken 1 or 2 courses that fulfill the requirement, but a review of transcripts tells us that on average, a student takes 7 diversity courses. But they don’t recognize most of those courses as addressing diversity,” Linkon wrote in an email to The Hoya.

This semester, over 200 undergraduate courses meet the diversity requirement, according to the course list on MyAccess.

The consequence of having so much course flexibility to meet the requirement is that students often end up accidentally fulfilling the diversity requirement, according to Badami.

“What bothered me was the fact that cultures like mine — of students of color, of religious minorities, those demographics — those cultures could go completely invisible, and students could still be satisfying the diversity requirement,” Badami said. “The fact that I could accidentally do the bare minimum — I think there’s a problem.”

“I have been involved in conversations about making sure that fulfilling the university’s requirement means that students are engaging with a range of experiences, beliefs, and ideas that push them to reconsider their own experiences as well as others,” Fields wrote in an email to The Hoya.

Recently released results of the spring 2020 cultural climate survey show that 20.3% of undergraduate students said they had professors who explicitly talked about the importance of diversity in the classroom.

These statistics indicate that the current diversity requirement is ineffective, Yen said.

“We found that students wanted to learn about systems, not simply differences between groups of people,” Yen wrote in an email to The Hoya. “Students overwhelmingly believe the requirement has value but know that there’s a lack of intentionality in courses that count.”

A Long Road Ahead

After assessing the current requirement, the Engaging Diversity Curriculum Subcommittee recommended that it undergo a formal revision process by a new committee, according to Linkon.

“We recommended revising the requirement to clarify its goals and add a review process to ensure that courses that fulfill the requirement engage substantively with difference, inclusion and inequality,” Linkon said.

The new committee is responsible for proposing a redesign of the requirement that keeps in mind the previous committee’s recommendations, according to Yen. The revisions involve developing stricter criteria for approved courses and teaching professors how to discuss diverse issues in the classroom.

Established this summer, the committee is in its early stages, mainly focusing on reviewing the climate survey, the findings from the previous subcommittee and new research, according to Phillips, who is co-chairing the committee because of their dissatisfaction with the current requirement.

The word “diversity” is too vague to adequately convey the requirement’s goals, according to Yen.

“We want to tighten the language around it to reflect not only what student activists from 2015 and earlier wanted to see reflected in the curriculum, but also what is necessary to understand our current moment,” Yen wrote.

“We would do well perhaps to add greater clarity to our understanding of diversity and perhaps sharpen the definition of what it is currently,” Shinn wrote in an email to The Hoya. “Otherwise, it might just be too broad to be useful.”

Some of the potential revisions, including revised standards for courses seeking the diversity label and an enhanced review process, will likely reduce the number of courses that count toward the requirement. However, the committee’s goal is not to make the requirement more difficult to satisfy, according to Yen.

“We’re not trying to make it any harder for a student to fulfill the requirement,” Yen wrote. “We just want them to have a better experience.”

Preparing faculty to discuss complex topics like power, marginalization and diversity is also one of the committee’s priorities, according to Phillips. To that end, the committee is hoping to implement it in a way that faculty become better at handling those topics in the classroom.

“Students don’t always feel like faculty have the appropriate skills to be teaching these topics in the classroom,” Phillips said. “That’s a real concern.”

The road ahead is a long one for these revisions. After the committee members prepare their proposal, they intend to send it to the MCEF during fall 2022 for amendments and final approval.

The university is collecting data from all constituents for a full revision recommendation this academic year, according to a university spokesperson.

“We are working on adjustments to better implement the current requirement with clearer expectations,” the spokesperson wrote.

Badami is optimistic that a fine-tuned diversity requirement could become an instrument for all students to take advantage of the coursework Georgetown has to offer.

“I’ve been able to find really great classes here,” Badami said. “I think there’s so many issues in society — such as systemic racism, the lasting impacts of colonialism and imperialism in the way we teach education and history — that have to be combated. And I think a diversity requirement is a really great way to do that.”

Ideally, revising the diversity requirement will elevate marginalized voices and equip all students with the tools to be able to identify and address power imbalances, according to Phillips.

“My hope is that it will create an environment where marginalized students feel like they are seen in a way that they perhaps are not by the university,” Phillips said. “Who knows? An engaging diversity requirement that is more impactful on the student body may inspire more students to agitate for changes at Georgetown and make it safer for even more marginalized folks.”