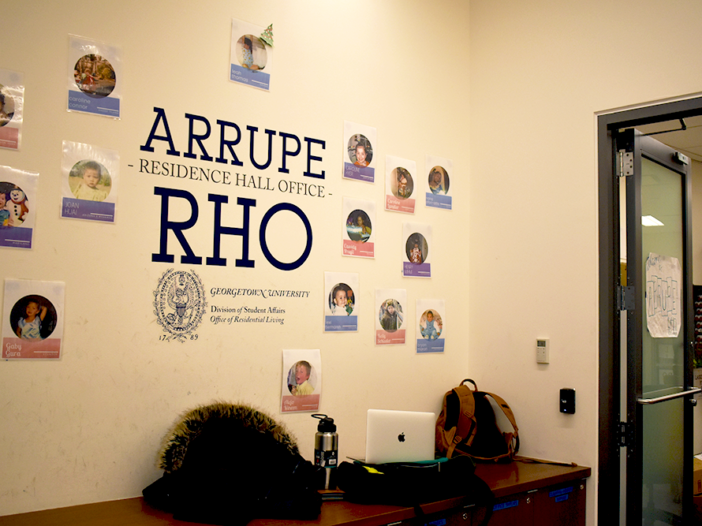 The university announced that it would be shifting from student-manned RHOs to smart lockers for package distribution at the end of the 2020 summer term. RHO managers and assistant managers were informed of the restructuring after receiving an email at 11:56 p.m. on March 5, one day before spring break began for students.

The university did not consult with RHO managers before the decision was made, according to Kennedy Hall RHO Assistant Manager Zaki Thabet (SFS ’21).

“It’s just super frustrating because they haven’t talked to managers at all. They didn’t give us any advanced notice so that we could respond to our teams and respond to the fact that our teams got told that half of the jobs in Residential Living are getting eliminated, including my job,” Thabet said. “There was no communication. They have completely gone over our heads, and it’s like they just completely disregard their student leadership.”

Residential Living recognizes that the timing of the announcement was not ideal, Director of Residential Services Bill Huff wrote in an email to The Hoya.

“We worked to inform students as soon as possible so they could make decisions going into housing selection and potential job opportunities in the fall,” Huff wrote. “Staff will be available to connect with student workers during spring break and beyond, either virtually or in person.”

Starting in the fall 2020 semester, keys will be managed in a centralized key room located in Harbin Hall with two additional annex spaces for students who live in other areas of campus, according to an email sent from Huff to RHO employees obtained by The Hoya. Student key assistants will be responsible for issuing lockout keys, performing key audits and helping manage lost keys. Key assistants will also be able to issue vacuums and brooms for students.

The current structure of the RHOs does not support the increasing needs of students regarding package deliveries, Huff wrote in the email announcing the change.

“The management and distribution of packages is currently a manual process that takes hours to complete each day,” Huff wrote. “To better align with best practices at our peer institutions we will be leveraging smart lockers and recommended process optimization to improve the overall student experience. Through these improvements, carriers will be able to deliver more efficiently, students will receive timely notifications regarding their deliveries, and on-campus traffic will decrease substantially.”

Self-serve package lockers have been implemented at universities including Princeton University, Vanderbilt University and Boston College.

Because of the restructuring, Residential Living will be hiring fewer student workers for the 2020-21 academic year. Residential Living, however, is committed to giving preference to current employees and students who have approved work study, Huff wrote in an email to The Hoya.

Residential Living plans to hire approximately 40 to 50 student workers for the key assistant position, according to Huff. Ninety-nine RHO assistants and 10 managers are currently employed across all five RHO locations, according to Thabet.

A key assistant has less meaningful and significant responsibilities than an RHO worker, Thabet said.

“I just don’t really see how that’s an efficient system to kind of consolidate all that down into one place in Harbin,” Thabet said. “There’s not really enough lockouts to demand having two people on shift in a windowless room in Harbin.”

The job description restructuring will also likely decrease the number of hours students can sign up to work, according to a Kennedy RHO employee who requested to remain anonymous.

“No one’s going to get that many hours,” the employee said. “If they’re going to hire that many people and have two, maybe three people on shift, I’m literally sitting in here doing the math based on those proposed hours that he gave, and that’s like, maybe five hours tops per week, which is just not enough for pretty much every single person I know who works here.”

The purpose of RHOs extends beyond distributing packages, according to Thabet. RHO employees aim to embody customer service and foster community, Thabet said.

The decision to consolidate RHOs comes after months of tension between student workers and Residential Living staff.

Unfilled professional staff positions have also contributed to a less supportive environment for student workers, according to an RHO manager who requested to remain anonymous. Residential Services Coordinator Jessica Scibetti left her position in December 2019 and Associate Director for Residential Services Ross Iosefson left his in January 2020. The two positions have yet to be filled.

“We haven’t been supported at all in these roles this year, not since Ross and Jessica left,” the manager said. “I think this is part of a trend that is developing this year. Res Living just does not care about the implications of its decisions on student workers.”

The remainder of the semester will be disheartening for RHO employees, Thabet said.

“It’s on the managers now with no guidance from professional staff to keep our staff motivated enough and energized enough to finish out the year before they shut us down,” Thabet said. “It’s hard to do that if there’s no guarantee of being rehired next year.”