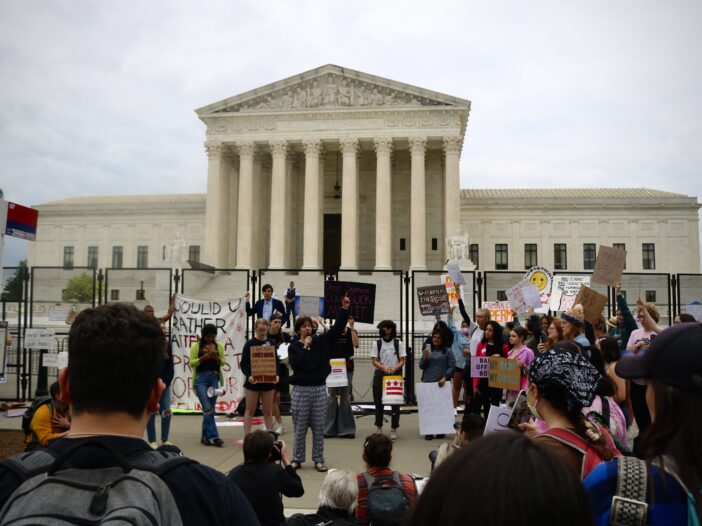 Students protested outside the U.S. Supreme Court to protect affirmative action, as attorneys inside the court held oral arguments regarding race-conscious admissions programs.

College students from around the country organized demonstrations Oct. 31 at the Supreme Court to show support for affirmative action. The protests came on the same day the Court heard two lawsuits regarding affirmative action, both of which have caused intense division over whether or not racial factors should be considered during admissions decisions.

Muskaan Arshad, Student Lead of the Harvard Affirmative Action Coalition and protest organizer, said the Harvard experience is rooted in diversity — and taking away affirmative action would destroy this valuable learning environment.

“If we cannot take race into account and pretend like we are in this race-blind society, it is going to systemically take us back so many years,” Arshad said in an interview with The Hoya. “The college experience is not what it is without diversity, without inclusion.”

Given the Court’s 6-3 conservative majority, the possibility of overruling long-upheld affirmative action policies seems increasingly tangible. At the Oct. 31 hearings, each of the Court’s six conservative justices indicated skepticism about the program and whether race should be a factor in college admissions moving forward.

“A lot of people immediately felt the need to do something,” Lewis told The Hoya. “There has already been a lot of struggle at Harvard to promote diversity and to fight for students of color.”

According to Lewis, over 100 students came to the protest, including students from Yale and Howard University.

Student leaders from the University of North Carolina (UNC) showed up to the Supreme Court protest as well. Christina Huang, Joy Jiang and Sarah Zhang, who serve as the student co-leaders of the UNC for Affirmative Action Coalition, started organizing UNC students’ trip to Washington, D.C., only three weeks prior, when the trio first heard about the affirmative action lawsuits.

“Almost nobody has more at stake here than the students themselves,” King told The Hoya. “Every student on every campus has something at stake here about what this is going to mean for our future and the future of our country.”

Studies from the Education Fund indicate that a majority of Americans believe affirmative action benefits all students and want the Supreme Court to protect these programs. Studies on Proposition 209 in California also found that after California stopped the California State University system from recruiting based on race in 1996, Black, Native American and Latinx student enrollment fell.

Lyssa Menendez and Kalila Arreola also traveled from North Carolina to the Supreme Court to support the UNC Affirmative Action Coalition. Arreola said that the experience was a learning opportunity for her to learn more about the issue.

“Without affirmative action, I really do not think I could be at the school that I am at right now,” Arreola said. “At first I kind of did not realize how personal it was to me as well. Being around all these people who have had similar experiences has been really important.”

Menendez said that Huang helped her realize her own stance on the issue.

“As a white student, I still recognize how diversity in the school is so beneficial for everybody,” Menendez told The Hoya. “No matter the ruling, we are going to keep fighting for what we need, which is affirmative action and race conscious admissions.”

To Lewis, repealing affirmative action would diminish the overall welfare of all students, particularly students of color.

“Everyone stands to lose from affirmative action being repealed or even diminished in any way,” Lewis said. “The whole community of people of color in this country would be impacted.”