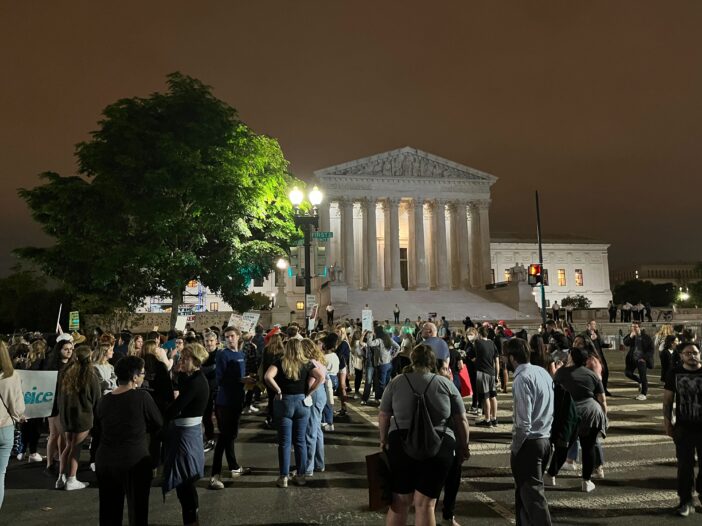 Student activists joined protesters at the steps of the Supreme Court to speak out against a leaked draft opinion showing the court may vote to strike down the landmark Roe v. Wade case.

Although Justices can and have changed their votes from draft opinions, the leaked memo indicates that the Supreme Court plans to hand the question of abortion laws back to states, according to Politico.

“We hold that Roe and Casey must be overruled,” Alito wrote in the draft. “It is time to heed the Constitution and return the issue of abortion to the people’s elected representatives.”

Students flocked to the Supreme Court on the evening of May 2, just hours after the Politico report.

H*yas for Choice (HFC), a pro-abortion rights student organization, supported students who attended the rally by providing financial support for transportation, according to HFC president Nina Yee (COL ’23). Additionally, during the Youth Rally outside the Supreme Court on May 5, a HFC member had the opportunity to speak, Yee said.

The night of May 2, Georgetown students chose to hold a silent protest, carrying signs that read “Keep Your Laws Off My Body” and “Abortion is Health Care.”

Student activist Esther Wroth (SFS ’24), who joined the protest immediately after hearing the news, said the silence allowed students to process the information in solidarity with one another.

“You can sit and be quiet anywhere you want. But going and being there with other people who are all sitting-in about the same thing or feeling the impact of the same thing is very different,” Wroth said in an interview with The Hoya. “While other people were showing up to protest, that wasn’t what we showed up for initially.”

Wroth said she is most upset about how the decision will unequally impact different areas and individuals.

“What made me very sad was not even the political disappointment around it, but just the idea that it’s going to so disproportionately affect certain Americans and certain regions and just certain communities,” Wroth said in an interview with The Hoya.

Young people and lower-income people, who are disproportionately people of color, may not have the resources to travel out of state for an abortion. Further, more than half of the Black population in the U.S. lives in the South, where most states are likely to ban abortion if Roe is overturned — and women of color make up a significant portion of the population there.

Thirteen states have “trigger laws” that would immediately ban abortion following a decison to overturn Roe v. Wade, and thirteen others are highly likely to ban or restrict abortion. Health and policy experts have warned that people of color and individuals from other marginalized groups will be most affected if Roe is overturned — especially those in the South and Midwest, where these trigger laws are concentrated.

Yee said HFC expected the Supreme Court to rule in this way given recent state attacks on other groups.

“H*yas for Choice is angered, but not surprised, that the Court would uphold such abhorrent violations of human rights,” Yee wrote to The Hoya. “We’ve been continually disappointed by the many anti-choice, homophobic, and transphobic state rulings over the past year, so seeing this occur at the national scale was the final piece of the puzzle.”

On May 3, the Women’s Match called for protesters to show up at their local courthouses at 5 p.m. in support of abortion rights following the leaking of the draft.

Rachel Dixon, who attended George Mason University and went to the Supreme Court on May 3, said she showed up to demonstrate her anger about the possible decision.

“I’m pissed off, and everyone is pissed off and it’s just the only thing that we’re allowed to do is be here and just show your support with our bodies,” Dixon said in an interview with The Hoya.

Dantes Augstian, a D.C. resident who also attended the May 3 protest, said he felt he had to show up to show his support for abortion rights.

“There’s no reason for me not to be here because a human right is sacred,” Augstian told The Hoya. “No man should dictate to another human being what to do with their bodies. So you have that God-given right, this is your body.”

Augstian said a decision is not representative of what the country wants.

“I’m more than disappointed. I’m outraged, I’m angry because these party tricks they’re playing on us. They’re not representative people. They’re not for the people,” Augstian said.

More than half of voters have said they oppose the overturning of Roe v. Wade, according to a Politico poll conducted after the leak of the opinion. Only 11% of 2,000 voters polled said abortion should be “illegal in all cases.”

Holly Aindvinder, who was 10 years old when Roe v. Wade became law, said she did not expect it to be overturned. A resident of Tennessee, Aindvinder worries about abortion access in her Republican-controlled state if Roe v. Wade is officially overturned.

“When I was young, I never dreamed that we would go backwards like this, and I took it for granted,” Aindvinder said in an interview with The Hoya. “This is about health care — reproductive rights as a health care issue.”

HFC will continue to fight for abortion rights next fall, according to Yee.

“We are committed to continuing to organize against this opinion, as well as the many state rulings, through next semester,” Yee wrote. “We encourage all other students who are similarly upset to first take care of themselves during such a stressful time, and return to campus ready to fight!