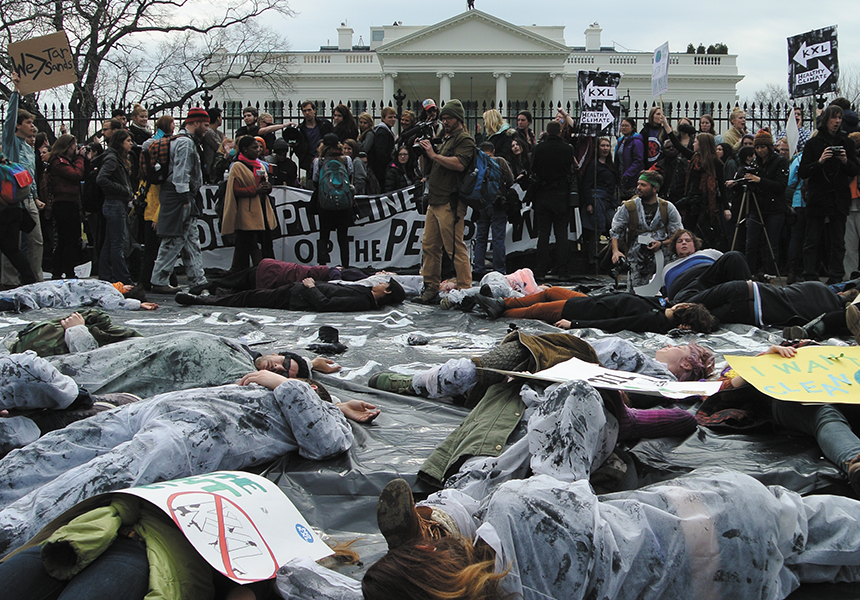 To chants of “climate change now,” more than 1,000 people, most of whom were college students, marched from Georgetown University’s Red Square to the White House on Sunday, protesting the construction of the Keystone XL pipeline.

Students from more than 100 universities participated in the protest, according to the event’s organizers. Eckerd College, located in St. Petersburg, Fla., sent the most students, at 40, while 10 Georgetown students participated.

The protest march started in Red Square at 10 a.m. and by 3 p.m., over 300 protestors had zip-tied themselves to the White House’s North Lawn fence, while 60 other protesters lay on a mock plastic oil-spill, awaiting arrest by Park Police and the Secret Service. The protestors spent the afternoon demanding the government’s abandonment of the Keystone XL pipeline.

The Keystone XL pipeline, if built, would begin in Canada, running 1,200 miles from Hardisty, Alberta, to Steele City, Neb., pumping up to 830,000 barrels of tar-sands oil a day.

The group primarily responsible for organizing the protest, XL Dissent, calls tar-sands oil an “absolute [ecological] disaster” on its website and is opposed to the pipeline and its subsequent transportation of large amounts of oil through American communities for fear of spills and irreparable ecological harm.

The protest, which was nonviolent, started at Georgetown as a symbolic gesture toward President Barack Obama’s speech on climate change, delivered from the steps of Old North in June.

Michael Greenberg, a sophomore at Columbia University and one of the key organizers of XL Dissent, traveled with 20 other Columbia students to D.C. for the weekend.

“These events are crucial … but it is to say that Obama’s rhetoric has been less than truthful and his rhetoric hasn’t matched his actions, and it’s things like this that are so crucial for holding him accountable,” Greenberg told The Hoya.

XL Dissent’s rhetoric runs contrary to a State Department report released in January, claiming that the construction of the pipeline would not significantly alter greenhouse gas emissions and that transporting oil through the pipeline would be a safer and more ecologically sound alternative than moving the oil by rail.

Obama, who has remained mostly mum on the construction of the pipeline, is set to make his decision within the coming months after the State Department concludes its assessment of the proposed pipeline and Secretary of State John Kerry makes his suggestion.

Chris Wager (SFS ’17) of GU Fossil Free saw the XL Dissent protest as a way to get involved with something he felt passionate about after coming to Georgetown from Houston, Texas, a city connected to the oil business through its large port and numerous refineries.

“I’ve always been into environmental movements and climate justice, especially coming from Houston where the oil business is huge and a lot of poorer communities are being affected,” Wager said. “I’ve seen where these people live, and how there’s this huge refinery within a football field of where their kids go out and play.”

Wager, who saw the protest’s starting point — just minutes from where he lives in New South — as a selling point to participating, lamented the seemingly small turnout of Georgetown students. According to Wager, the 10 students who participated are all involved in GU Fossil Free.

“Since it was starting five minutes from where I sleep, it was, for me, a chance I really couldn’t pass up,” Wager said. “I would have liked to see more people from Georgetown, but I’m not sure why there seems to be this ambivalence toward climate issues on the Georgetown campus.”

Caroline James (COL ’16), also a member of GU Fossil Free, echoed Wager’s disappointment with the number of Georgetown students in attendance, highlighting that of the 10 who marched in the protest, only three were arrested — herself included.

“I would have liked to see larger turnout, especially since there were students who came from all over the country in busloads,” James said.

Varshini Prakash, a junior at the University of Massachusetts at Amherst and a lead organizer for XL Dissent, started the march by addressing the crowd that had assembled in Red Square by megaphone.

“Pollution, violence, starvation — all of these will only be exacerbated if we allow this pipeline to take its course,” Prakash said. “We have an opportunity to fight for the health and the security and the survival of people everywhere. … This is what we’re truly fighting for.”

Prakash said her passion for environmental activism began with her participation in an earlier Keystone XL protest in February 2013 and has since taken off.

“This is the first youth civil disobedience we’ve had focused on students.We are the frontline communities for the future of climate change,” Prakash told The Hoya. “I see this as the beginning of what’s going to be a pretty intense fight for young people and their fight for their future.”

The protest route traveled from the university along O Street, before making its way to Wisconsin Avenue. From there the march traveled along M Street, eventually connecting to Pennsylvania Avenue and arriving at the White House at 11:30 a.m. According to Greenberg, XL Dissent, with the help of D.C. Action Lab, had acquired the proper permits for the protest and had the Metropolitan Police Department block off intersections along the protest route.

Jenna deBoisblanc, a native of New Orleans, La., and a recent college graduate, has co-founded two environmental nonprofits: 350 Nola and 350 Louisiana. After surviving Hurricane Katrina in 2005, deBoisblanc began lobbying for the environment in any way possible.

“I went to any and every climate change protest I could,” deBoisblanc said. “Now, the movement is accelerating.

For the protest, deBoisblanc dressed as Captain Planet from the popular 1990s cartoon of the same name and expressed interest in getting arrested by the end of the day.

By 6 p.m. deBoisblanc was one of the 371 arrested in front of the White House, while James was number 340.

“A lot of the people whose justice we’re fighting for and who will be affected by this pipeline could not afford to be at the protest today. I felt like what I was doing was the least of what I could possibly do for these people,” James said. “Even though we were tired and cold and wet it was still very empowering.”

Aly Johnson-Kurts of Smith College in Vermont saw being arrested as the only way to provide a clear message to stop the construction of the pipeline.

“We need to escalate it. I’m coming here today because we’ve exhausted the traditional modes of creative change, we’ve written letters and called our legislators. … It’s not enough to get change on infrastructure projects like the Keystone Pipeline,” Johnson-Kurts said. “The tactics have to match the scale of the issue.”

Protesters who were arrested had to pay $50 bail, with some waiting more than six hours before being cut off the fence and processed by the police.

“This was an opportunity to make a statement very peacefully and get the attention of President Obama,” James said. “If everything worked the way it was supposed to with our government this direct action wouldn’t be necessary.”

On Monday, XL Dissent protested in San Francisco with plans to continue until its voice is heard by the administration.

“The question is, whether Keystone gets approved or not, what’s the battle going to be next?” deBoisblanc said.