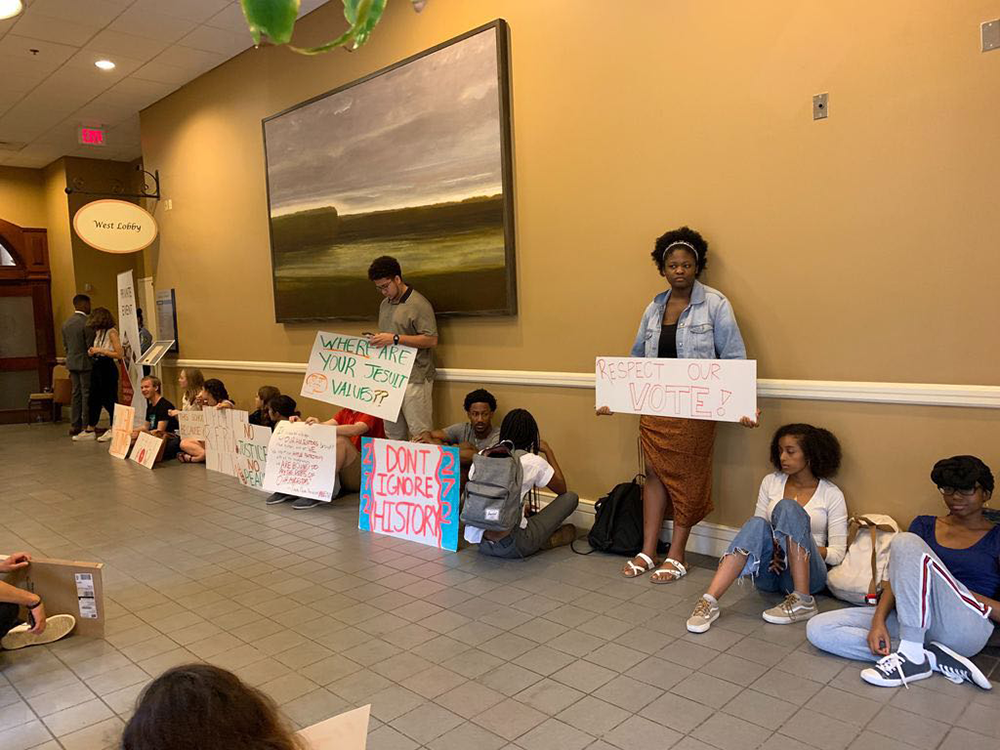 Student frustration is continuing to build as Georgetown University’s board of directors, which met multiple times this week, has still not publicly provided a concrete timeline to students for action on the GU272 referendum’s results, over six months after the student vote.

The board of directors held at least three meetings Oct. 3: One meeting included student representatives Doherty and Eliza Lafferty (COL ’21) along with the board of directors; another full-body meeting included Georgetown University Student Association President Norman Francis (COL ’20) and President of Georgetown Graduate Student Government Lewis May, a second-year master’s student in the School of Foreign Service; a third private meeting was closed to students, according to GUSA Press Secretary Harper Thomas (SFS ’22).

The board of directors’ full-body meeting, which is separate from the meeting between representatives and the board, occurred amid student demonstrations calling for the board to implement the results of the April 11 referendum. Students held “Where are your Jesuit values?” and “Don’t ignore history” posters and chanted “Respect our vote” outside of the Georgetown Hotel and Conference Center, where the meeting was held.

As a student referendum, the results do not bind Georgetown to implement or formally vote on the fee. The board discussed the GU272 referendum at its June 10 meeting but did not announce any specific responses or action to the referendum after the meeting.

Doherty and Lafferty, also student representatives to the board of directors, raised the topic during the meeting they attended, according to Doherty.

Though the board said it plans to reach out to the GU272 advocacy group after the meeting, it did not provide a definitive timeline, according to Doherty.

“We were hoping for a response different from June, and we were hoping for a concrete timeline, or something at least,” Doherty said in a phone interview with The Hoya. “Today’s meeting was basically more of the same that ‘we’re excited to converse with the students,’ and that was disappointing, obviously.”

The board did not discuss the topic at a full-body meeting attended by Francis, he said.

Francis voiced frustration at the lack of full transparency from the board on its discussions of the referendum.

“Students want to be involved and we want to be heard and be told actual dates and timelines,” Francis wrote in a statement to The Hoya. “Right now it seems like we are stuck hearing about an endless loop of dialogue and engagement but are not included in the actual discussions that matter.”

66.1% of students voted “yes” in an April student referendum to establish an added semesterly fee to contribute to a fund benefiting descendants of the GU272, the 272 enslaved people sold by the Maryland Province of the Society of Jesus in 1838 to financially sustain the university. The referendum had the highest voter turnout in recorded student government electoral history.

The board of directors typically holds multiple meetings over a few days during its sessions, and student representatives to the board are only permitted to attend the meeting for the Working Group on Student Affairs, according to Doherty.

The university is working to address logistical questions raised by the referendum, according to Dubyak. The university also began searching for a librarian to oversee collections on slavery.

Thursday’s board meeting comes days after members of the advocacy team and GUSA representatives met with Cheryllyn Branche, president of the GU272 Descendants Association, and Fr. Timothy P. Kesicki, S.J., the president of the Jesuit Conference of Canada and the United States, on Monday, according to Dubyak.

“This meeting emphasized the importance of this Dialogue as part of the University’s approach to engaging with members of the Descendant Community and working with Descendants to understand how we might together chart a path forward,” Dubyak wrote in an email to The Hoya.

The board has lacked transparency and clear GU272 initiatives when meeting with the GU272 Advocacy team, according to team member Aly Pachter (COL ’19). (Full disclosure: Pachter formerly served on The Hoya’s board of directors.) Though the advocacy team has offered to participate in further meetings with board members, none have reached out since June, she wrote.

“During our meetings, the members of the administration often dodge direct questions from the advocacy team and emphasize dialogue over tangible steps forward,” Pachter wrote in a statement to The Hoya before the Oct. 3 meeting. “The advocacy team has left almost all meetings doubting the university’s full commitment to implementing the referendum. We’ve had several formal meetings with administration.”