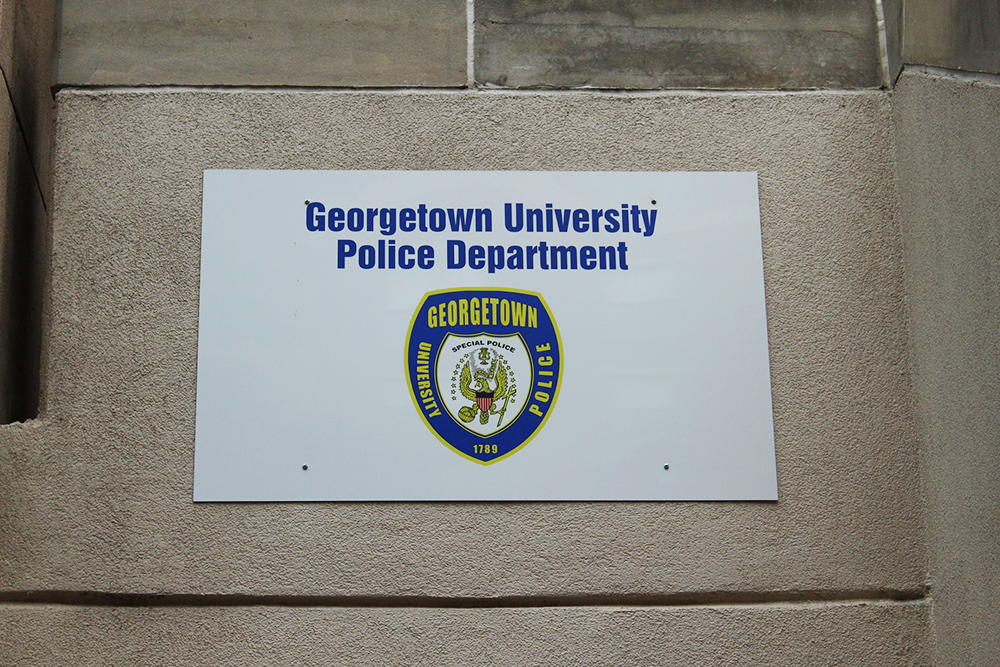 Students are concerned about a perceived lack of sufficient training for the Georgetown University Police Department on responding to reports of sexual assault.

GUPD has 14 officers, known as the Sexual Assault Response Team, specifically trained to respond to sexual assault and provides “standard training” to all other officers on sexual assault response. However, students, including members of the new student group Students Taking Action against Interpersonal Violence, have little awareness of this standard training and its contents and some are concerned the training is not enough, according to Kory Stuer (COL ’19)

Chief of Police Jay Gruber emphasized the value of SART’s training in working with survivors.

“SART officers are trained to respond to reports with professionalism and compassion,” Gruber wrote in an email to The Hoya. “They have a deep understanding of the on- and off-campus resources available to survivors and can explain University and criminal processes to help ensure survivors understand all options moving forward and are fully supported throughout their process.”

Many of the officers have personal biographies listed on the SART website in which they detail their experience and for many, their desire to help survivors get the best options they can on campus. However, these officers make up a relatively small segment of the department — 14 of the over 70 officers have SART training.

“There are currently 14 active SART officers and five additional officers undergoing training,” Gruber wrote. “GUPD strives to have at least one SART officer on every shift so they are available 24 hours.”

“CAPS has a clinician on-call at all hours and they are a great resource for supporting survivors in emergency situations,” Bernstein said. “In addition, we regularly refer students to the 24/7 community resources with expertise in assisting survivors, including the D.C. Victim Hotline, D.C. Rape Crisis Center, and [Rape, Abuse, Incest National Network].”

However, members of STAIV, which was formed by Stuer and Avery Moje (COL ’19), are concerned that this support is not enough.

“It is absolutely not sufficient that we only have 14 people for the only 24/7 crisis resource for this university,” Stuer said in an interview with The Hoya. “[24/7 coverage] should not be the goal. The goal should be to get the entire department SART trained as basic due diligence and best practice around, ‘How are we making sure that that everyone at this university has adequate training and knowledge about how to support survivors?’”

There were approximately 17 reports of sexual assault, eight reports of dating violence and 11 reports of stalking specifically reported to GUPD in 2017, according to GUPD’s annual crime reports. However, this number is not representative of the actual number of assaults on campus, as stated in the 2016 climate report. Just over three in 10 female undergraduates and about one in 10 male undergraduates reported experiencing “non-consensual sexual contact as a result of physical force or incapacitation since entering Georgetown,” according to the report.

Moje explained that increased training and awareness thereof in GUPD and the student body could help increase trust and reporting.

“I think it’s very important that students can call immediate response services and know that they won’t experience secondary trauma by calling that service,” she said.

Moje criticized the lack of transparency on the level of training that all officers receive.

“I think that this is an important point from the standpoint of student transparency or administration transparency with the students,” Moje said. “If they are being trained, I don’t know about it and I am heavily involved in this work.”

For some students, GUPD does not represent an accessible source of support, said Diego Blandon (COL ’19), a member of both STAIV and Georgetown United Against Police Aggression. The question of trust in the police and accessibility leads to underreporting, they said.

“You could have 400 officers and there still would be a large portion of the population who that isn’t serving, and whom that is making less safe,” Blandon said. “We know that students of color and workers at this university face a lot of harassment from GUPD, and the university’s failing the students who feel unsafe calling GUPD for something else to say that ‘this is your only resource.’”