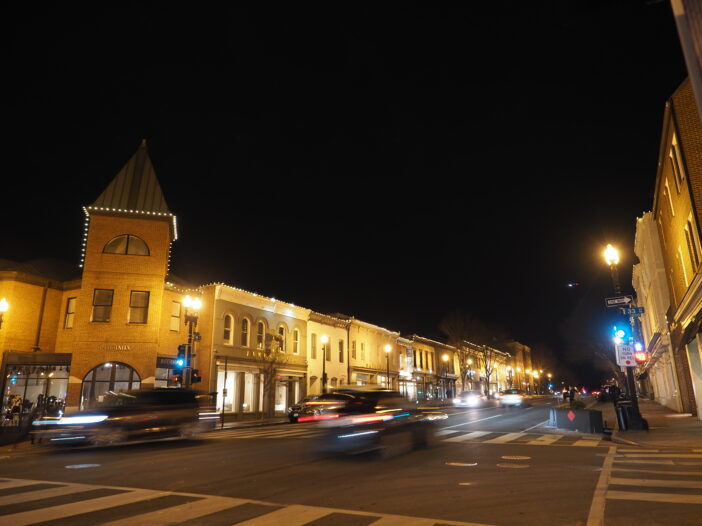 CW: This article discusses gun violence. Please refer to the end of the article for on- and off-campus resources.

The shooting occurred at approximately 6:13 p.m. at the intersection of M St. and 33rd St. N.W., near Georgetown Cupcake. When police officers arrived at the scene, the victim was reported unconscious but breathing.

GUPD sent a HOYAlert — a message sent to the Georgetown community with guidance in the event of a threat — at 7:10 p.m, nearly one hour after the perpetrator shot the victim.

“There is a report of a shooting at 33 St and M St; avoid the area and follow instructions from authorities,” the HOYAlert reads.

Students expressed concerns for their safety as a result of the delayed notification.

Carly Comparato (COL ’22) was walking on M St. with two friends when the shooting took place. She hid in CB2, a nearby furniture store, until she thought it was safe to return to her house in the Georgetown neighborhood.

Comparato said her friend called GUPD at 6:42 p.m. and asked them to send out a HOYAlert. According to Comparato, GUPD told them the HOYAlert was coming shortly; 30 minutes later, the HOYAlert arrived on community members’ phones.

“In my opinion, emergency messages of this kind should be as close to instantaneous as possible,” Comparato wrote to The Hoya. “If it is time consuming to write the message or send it out, that is a safety problem.”

Mike Brodo (SFS ’22), who initially received word of the shooting through a text from a friend,  said he also called GUPD to alert them of the news in hopes of compelling them to send out a HOYAlert.

“I decided to call GUPD and inquire, ‘Is there a plan to send something out? People are concerned, since there’s an active situation, especially with the helicopter with a spotlight,’” Brodo said in an interview with The Hoya. “I called at 6:53, and usually they pick up pretty fast. But it just kept ringing for at least 35, 45 seconds.”

Brennan George (SFS ’23), a resident assistant in Loyola, Xavier and Ryder Hall (LXR), said he took it upon himself to notify his residents at 6:37 p.m. of the potential safety concern after he saw police officers scanning the yards in between houses near campus and heard from people who were returning from the scene that someone had allegedly been shot.

“I hadn’t seen an alert from the university yet, so I thought it was important to notify them in case the suspect was still in the area,” George wrote to The Hoya. “At that point, the details of the shooting hadn’t fully emerged, so for all I knew it could have been a random shooting. For that reason, I wanted to make sure residents knew to take steps to ensure their own safety.”

According to Phoebe Chambers (COL ’25), who found out about the incident via the “Free Food On Campus” GroupMe, a mobile group messaging chat, students were relying on word of mouth from one another for information.

“It’s really disturbing that Georgetown students have to rely on each other to communicate information regarding threats to student safety, but since the University never sends time-sensitive information out quickly, we don’t have a choice,” Chambers wrote to The Hoya.

Comparato, who lives in an off-campus house only blocks away from the site of the incident, said she and her housemates were uncertain about the proper safety precautions to take without clear guidance from the university.

“The uncertainty and lack of information made us, especially those of us in my house who had just seen the situation firsthand, want to take all possible precautions to stay safe,” Comparato wrote.

Last semester, students expressed concerns that GUPD failed to notify the campus community of multiple dormitory intrusions, including a Sept. 19 intrusion in which an unknown perpetrator with a pocketknife entered a women’s bathroom in New South Hall and followed a resident through the hallway.

GUPD sent a HOYAlert as it found out about the public safety concern, according to a university spokesperson.

Brodo said he was concerned about the lack of information in the HOYAlert message that was eventually sent out about 55 minutes after the shooting.

“It was just very plain and lacking substance,” Brodo said. “Based on even what was sent out 30 minutes before that by the D.C. Police, they were providing a little bit more info, they provided a preliminary description of the suspected perpetrator. I felt that maybe Georgetown should have done that.”

Jay Gruber, GUPD chief of police, sent an email to members of the Georgetown community the following morning with an update on the shooting and safety reminders.

Georgetown will increase security around campus in response to the incident, according to a university spokesperson.

“When there is an increase in safety incidents anywhere on campus, GUPD increases patrols out of an abundance of caution and takes appropriate steps to respond to ensure the safety of the community,” the spokesperson wrote.

The lack of communication surrounding this incident raises additional concerns about community safety in the event of an active shooting situation, according to Brodo.

“I think what it does show is that they’re unprepared for some of the worst situations,” Brodo said. “It does strike a question to me of what if this were a shooting on campus, like an active shooting situation, where it was not a targeted incident? What if it was someone that wanted to engage in a mass shooting, would the response be this pathetic?”