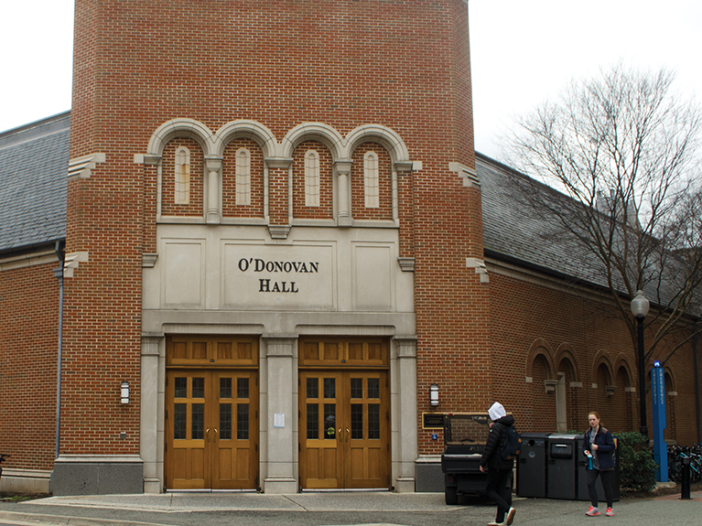 Georgetown University students living on campus during the spring semester are raising dietary, financial and safety concerns after learning they are required to purchase the All Access 7 meal plan.

The university is offering the All Access 7 plan, which gives students unlimited meal swipes and $200 in Flex dollars, at a discounted rate of $2,588 for the semester.

Meal plans at Georgetown typically include a number of prepaid meal swipes that give students access to select food stations. Students can also pay for meals with debit dollars or Flex dollars, which can be used at any of Georgetown’s dining services, known as Hoya Hospitality locations.

However, the plan is difficult for students with dietary restrictions and increases the risk of COVID-19 transmission among students and staff.

While the university required all students living on campus in the fall to purchase a meal plan,  only first-year students were limited to the All Access 7 plan. Upperclassmen were given the choice between the All Access plan and the Block 100 plan.

Last semester, the university also offered upperclassmen the Block 100 plan, which gives students 100 meal swipes to be used throughout the semester for just $1,371, nearly half the cost of the All Access 7 plan, according to on-campus student Jessica Duhon’s (SFS ’22) fall billing statements.

Duhon, who has been on campus since May 2020, finds cooking in her own apartment to be preferable and significantly less expensive than the All Access 7 plan.

“Along with a lot of people at the beginning of quarantine, I learned how to cook because I had to,” Duhon said in a Zoom interview with The Hoya. “After spending the summer cooking for myself, why would I want to go back to eating this lesser quality food and also paying a lot more for it?”

“The driving factor behind senior leadership’s decision to require all residential students to hold the meal plan continues to be the health and safety of the campus community,” Schoen wrote to Duhon. “With COVID-19 cases on the rise nationally and locally, it is more important than ever for students to avoid any unnecessary exposure.”

However, many students feel it is a  greater health risk to enter the dining hall than cook in their own apartments, according to Duhon.

To reduce some contact, mobile ordering is available at certain dining locations, as well as pre-prepared grab-and-go meals, according to a university spokesperson.

“As was in place this Fall, dining services are set up to meet physical distancing guidelines, provide enhanced sanitation standards, and serve a reduced population density,” the spokesperson wrote in an email to The Hoya.

In addition to safety concerns, students with dietary restrictions have had difficulty finding food options on campus.

Gwyneth Murphy (SFS ’23), who has several food allergies and is vegan, was not allowed an exemption from the meal plan for the fall semester after a registered dietician at Georgetown disregarded paperwork describing her allergies and felt confident she could go without an exemption, she said.

“Ultimately, the problem is that on-campus students who have dietary restrictions and can’t find food at Leo’s are going to be paying for that plan, regardless if they eat there,” Murphy said in a Zoom interview with The Hoya. “But then they also now have to pay for groceries, so you’re doubling food costs, and that’s exactly what happened to me this past semester.”

The new meal plan requirement was designed to alleviate student concern about food insecurity and will be covered by financial aid. The plan also gives students access to a variety of options, even for students with dietary restrictions, according to the university spokesperson.

“The Allergen station within The Table, restricts the top eight allergens from all recipes, and allergen information is available on the hoyaeats.com website and digital menu boards within Leo’s to provide transparency into our offerings so students can make educated choices about what food they select,” the spokesperson wrote. “There are also multiple options for vegans and vegetarians at each meal period, seven days a week.”

Despite financial aid coverage, a student who cannot fulfill their dietary needs with the plan must still spend on groceries, Murphy said.

Last summer, a petition that asked the university to give on-campus students the choice to opt out of a meal plan garnered nearly 50 signatures.

“Already, students are facing financial hardship, or have extremely limited options due to dietary restrictions; for many, buying their own groceries is both safer and less expensive,” the petition reads. “It simply does not make sense for the University to mandate that all students pay full price for limited grab and go options.”

Murphy, a member of the Georgetown University Student Association accessibility and mental health team, said the university was not responsive to this petition or to pressure from GUSA. However, GUSA will continue to advocate for a change in the meal plan policy this semester.

“We met with multiple admin to figure out if there was any chance that we could get this policy changed, and they were not interested at all,” Murphy said. “GUSA is revisiting it for this next semester to see if we can make any more improvements or changes moving forward, so there’s always hope that something else is going to change, but based on their initial reaction in our first meeting I don’t see them changing their opinion on this.”

Students living on campus want more transparency from the university’s decision-making process and a more understanding response to student concerns and questions, according to Duhon.

“Most of us are living here because we don’t have anywhere else to live or we don’t have anywhere else where we can be successful college students, and it’s very upsetting when you are in that kind of position where you don’t really have any options,” Duhon said. “It’s like a captive audience right there; they’re trying to squeeze as much money out of us as they can.”