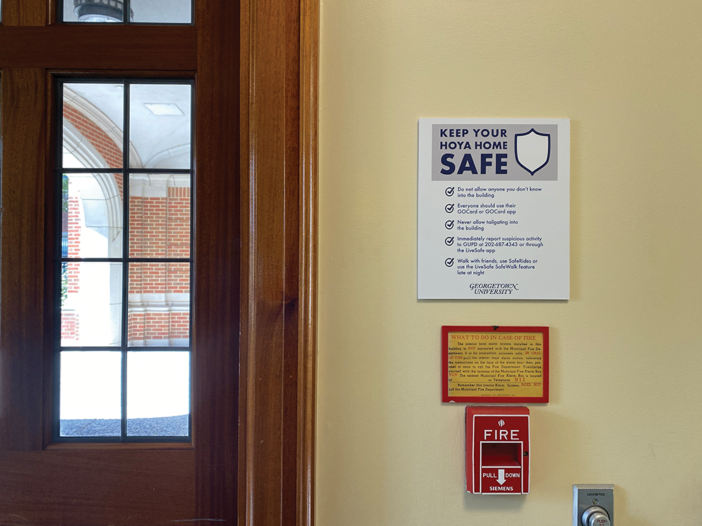 Students initially voiced concerns this semester after an intruder with a pocketknife entered New South Hall in the early hours of Sept. 19. After the event, many students and organizations called on the university to improve communication. After the Sept. 19 incident, the university said there was no active safety threat to students.

However, between Sept. 16 and Oct. 8, three separate intrusions occured on campus, according to both police logs and student accounts of the incidents. On Sept. 16, an intruder entered Reynolds Hall, sat down in a first-floor common room and interacted with students. Almost three weeks later, an unknown person entered a classroom in Healy Hall and interrupted a lecture. Four days later, an intruder entered Kennedy and McCarthy Halls and walked around the dormitories.

The university only informed students living in affected dorms after the intrusions in New South and Kennedy, according to emails obtained by The Hoya.

Further, the university never alerted the student body at large, leaving many students confused about the details of the break-ins and concerned about campus safety.

Around 8 p.m. on Sept. 16, an unknown person entered Reynolds Hall and made their way to a first-floor common room. Once in the common room, the individual began interacting with students who were studying, including Erin Powers (SFS ’24).

“We were just sitting there doing homework and this guy walked in and he asked where the bathroom was and we told him,” Powers said in a phone interview with The Hoya. “He came back, and then he sat down and took off his shirt and sprayed cologne on himself. And then he put his shirt back on, and then we left after that because it was creepy.”

The group of students did not contact the Georgetown University Police Department (GUPD), according to Powers. However, GUPD has said it learned about the incident and identified a suspect.

Around 12:30 p.m on Oct. 4. during an “Intro to Economic and Political Development” lecture, an unknown person entered a classroom in Healy Hall and began disrupting the lecture by talking over students in the class, according to multiple students in the course. The intruder sat down, and the professor requested that the intruder leave the classroom. However, the person stayed and continued to disrupt the lecture.

Four days later, at around 10:00 p.m., an unknown person reportedly gained access to Kennedy Hall. The individual entered the elevator as students were exiting, according to Powers, who was also present for the incident in Kennedy.

“We were going on the elevator from floor eight to the first floor, and then when it opened on the first floor, this guy — he just ran in before we could even get off. And then we ran out,” Powers said.

After Powers exited the elevator, she encountered a crowd of students who had seen the intruder in the building.

Eric Lipka (COL ’23), who was in the crowd of students and had previously seen the intruder enter Kennedy Hall, called GUPD to report the incident after speaking with Powers and other students in the lobby.

GUPD was first informed of a “suspicious person” on the fifth floor of Kennedy Hall at approximately 10:15 p.m., according to an Oct. 9 email from the Office of Residential Living sent to residents of the Southwest Quad complex obtained by The Hoya. GUPD located the suspect in McCarthy Hall, which is connected to Kennedy, and “took appropriate action” to remove the individual from campus, the email said.

A university spokesperson said the university is aware of the Kennedy incident, and there is a report of the intrusion in the GUPD October crime log.

In total, since Sept. 16, there have been four reported intrusions on Georgetown’s campus, an increase in the typical number of known events in a similar timeframe. Between Sept. 16 and Oct. 13, 2019, the last fall semester students were on campus, there were no reports of unlawful entry in the GUPD monthly crime logs.

A Lack of Communication

The university only sent communications to students living in affected dorms related to two intrusions on campus. The Office of Residential Living sent two emails to New South residents regarding the New South incident on Sept. 19 and Sept. 20. The university also emailed students in the Southwest Quad on both Oct. 9 and Oct. 13 regarding the Kennedy incident.

Residence halls are secured by a dual swipe entry system, where students are required to swipe their GOCards both to enter the building and to enter a specific floor. Students should be cautious of their surroundings to ensure non-university-affiliated individuals do not enter residence halls, according to a Sept. 20 email from the Office of Residential Living to students in New South obtained by The Hoya.

“We encourage all students to be aware of their surroundings when entering and exiting their residence hall, to avoid allowing individuals to enter without swiping their own GOCard and to check that doors fully close/lock upon entry and exit,” the email reads.

The university has not sent a HOYAlert, an emergency notification message sent to students, about an intrusion this academic year, according to several student sources.

After both the New South incident and the Kennedy incident, the university announced in the Oct. 13 email to residents of the Southwest Quad that it would increase GUPD patrols in and around the student residence halls on campus. In response to the Kennedy incident, the university also announced plans to increase student guard presence in the Southwest Quad and New South, according to the Oct. 13 email.

Recent studies show that an increased GUPD presence is unlikely to deter crime, according to NPR. Additionally, many students have voiced concerns around GUPD’s police presence on campus, as university police officers have hyperpoliced students of color.

GUPD also hung posters around campus residences as part of a public campaign encouraging students to be more aware of their surroundings, according to a university spokesperson.

In response to the student concerns and the national “defund the police” movement, a push spurred by the police murder of George Floyd to decrease police department budgets in cities across the United States, students in the Georgetown University Student Association launched the Georgetown University Police Department Abolition Working Group to abolish the police department’s presence on campus completely.

Students should continue reporting any incident to GUPD, according to a university spokesperson.

“We recognize incidents like these can be distressing to members of our community, and we urge students and all members of the Georgetown community to report issues of concern to GUPD,” the spokesperson wrote in an email to The Hoya.

Regardless of possible changes, the incidents have left many students, including Powers, with concerns about campus security.