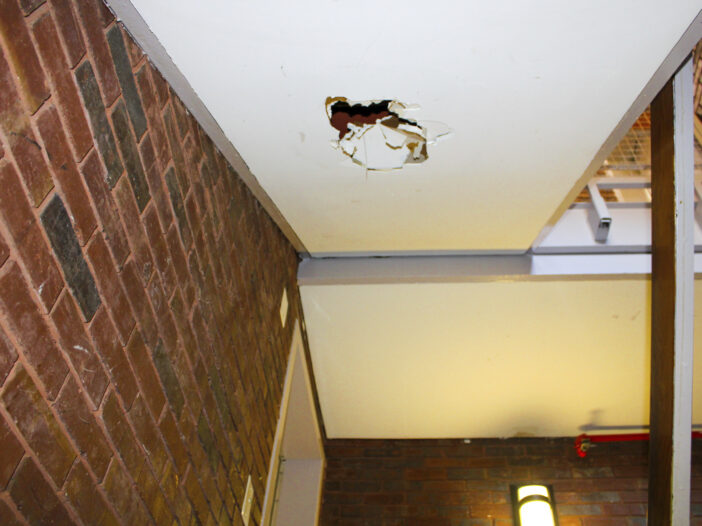 Two weeks after Kat DeMaret (SFS ’24) moved into her Village A apartment, she noticed water steadily leaking from the ceiling. She called facilities and immediately set up buckets to collect the water.

On Aug. 22, a few days after her first call, facilities workers came and removed parts of the ceiling to allow the piping and insulation to dry out, saying they would come back to replace the missing chunks of the ceiling. Maintenance did not return to fix the ceiling until Sept. 21, almost a month later.

From leaks like the one in DeMaret’s apartment to broken air conditioning units, The Hoya has spoken to three students who have reported submitting work orders for problems in their residences and having to wait weeks for them to be resolved.

DeMaret told The Hoya that she suspects the exposure may have caused health issues for anyone who spent time in her apartment.

“My roommates and I have all been experiencing allergy-like symptoms (coughing, sneezing, dry itchy eyes, sore throats) and any visitors in our apartment have started experiencing them after a few hours there as well,” DeMaret wrote to The Hoya prior to maintenance workers returning Sept. 21.

The situation worsened when the air conditioning in DeMaret’s apartment went out Aug. 22. DeMaret and her roommates were forced to leave the apartment for four days when it became too hot to live there. DeMaret stayed in a hotel room provided by the Office of Residential Living, while her roommates slept on friends’ couches.

Despite showing symptoms of sickness, sending multiple emails, making several calls and paying an in-person visit to the Department of Planning & Facilities Management, DeMaret received no response for weeks on when her ceiling would be fixed.

It took DeMaret’s roommate, Robin Brinkmann (SFS ’24), speaking about the issue to her colleagues at the SFS dean’s office in September to get maintenance back in the apartment to fix the ceiling.

“I work at the dean’s office so I just happened to have mentioned the issues I was having when I was on shift a couple times and then a few employees at the office directed me to communicate with Jim Duffy to move our apartment to a higher priority,” Brinkmann wrote to The Hoya. “I was in direct contact with him and I’m pretty sure he expedited our repairs.”

DeMaret is not the only one dealing with issues like broken air conditioning and delayed maintenance response times.

Air conditioning for all apartments in Nevils and LXR, which collectively house over 450 students, stopped working for five days due to a chilled water system failure spanning from Sept. 10-15. Residential Living addressed the issue in an email to affected students Sept. 12, writing that emergency maintenance had started working with contractors to fix the chiller that day.

Nevils resident Alene Hanson (COL ’23) said that it got too hot for her and her roommate to stay in the apartment at one point.

“It was pretty uncomfortable for that whole week,” Hanson wrote to The Hoya. “We had to stay at a friend’s house one night because it was difficult sleeping in our apartment.”

A university spokesperson said the university responds to facility work requests and other student reports in a timely manner.

“The safety, health and well-being of our students is our highest priority. We work through every request as diligently and expeditiously as possible,” the university spokesperson wrote to The Hoya.

DeMaret said she believes university officials have failed to protect the health and safety of their students by neglecting dire facilities and maintenance issues.

“I do not feel that my health and safety or the health and safety of my roommates are being prioritized by the university at all right now,” DeMaret wrote. “We have had to make constant effort for facilities to do something about the situation in our apartment that is actively making us sick, and they have failed to respond.”

The Hoya has independently verified all claims made in this piece by reviewing cited correspondence with facilities staff.