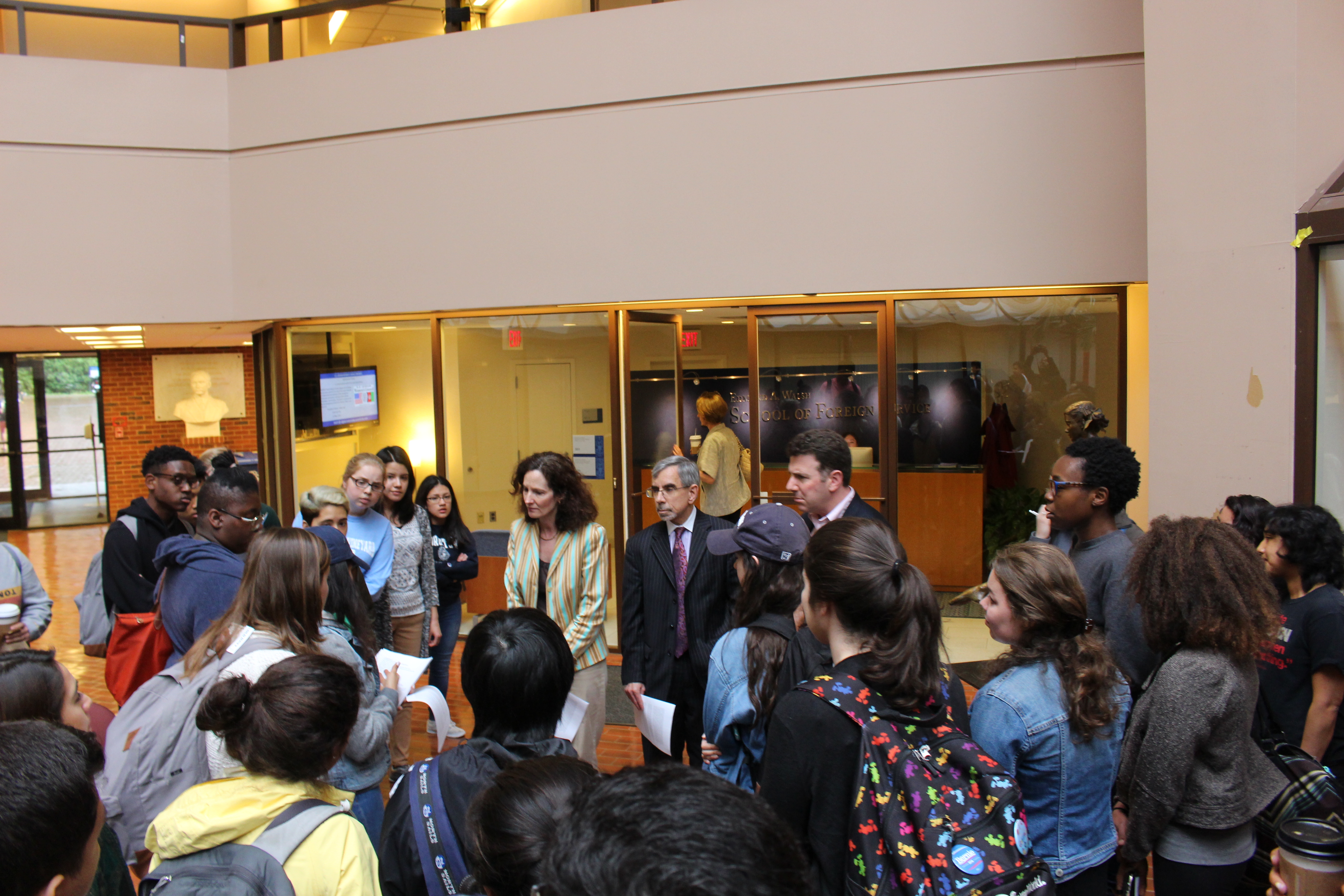 Around 30 students led by advocacy group UndocuHoyas delivered a letter to the School of Foreign Service Dean’s Office yesterday requesting that the university rescind its invitation to Secretary of Homeland Security Jeh Johnson to speak at the SFS commencement address, citing Johnson’s role in immigration enforcement and the deportation of people living in the country illegally.

Hemly Ordonez (SFS ’08) also began circulating a petition calling for the university to rescind its invitation Monday, amassing 399 signatures as of Tuesday at 11 p.m.

The letter, written by members of UndocuHoyas, a student group founded in 2014 that represents undocumented students, stated Johnson should not attend the ceremony given his role in immigration enforcement, including the deportation and separation of families.

“We should not be forced to receive our diplomas from an individual who is directly responsible for separating our families,” the letter writes. “Therefore, we strongly implore the university to rescind Secretary Johnson’s speaking invitation and take meaningful action to ensure that graduation is an inclusive and safe experience for all members of the Georgetown community.”

“Johnson’s invitation is an insult to my family, to the myriad of Georgetown alumni from mixed-documented families, and to the undocumented students who are preparing to graduate this month. Graduation is supposed to be a safe, welcoming environment for students and families who have worked so hard to graduate, not a hostile or uncomfortable one,” Ordonez wrote in the letter.

In a university statement sent to The Hoya, Director of Strategic Communications Rachel Pugh said the university plans to use Johnson’s visit to increase dialogue over issues of freedom of expression and immigration.

“Our university leadership will meet with students this week to hear their experiences and concerns and is committed to seeking forums in which Secretary Johnson’s engagement on campus can foster even more dialogue on these challenging issues,” Pugh wrote.

Following the university’s announcement of Johnson’s address Friday, students began posting on Facebook and changing their profile pictures to express their concerns over Johnson’s planned address.

“When I first heard that Johnson was selected to be the commencement speaker for the SFS graduation, I was in shock. A few weeks ago, the university ‘came out’ in support of undocumented students: they institutionalized resources for students and even launched a website. All of a sudden, it felt like they had take 10 steps backwards,” Padilla wrote in an email to The Hoya. “Even though this is not my graduation, I felt disrespected.”

During Johnson’s tenure as secretary of homeland security, the department has carried out raids against families that have received final orders of removal, resulting in their deportation.

In response to UndocuHoyas’ petition, Reed Howard (SFS ’17) launched a change.org petition calling for the university to keep Johnson as the commencement speaker. Howard, who circulated the petition titled “Protect Freedom of Speech at Georgetown University” on a Facebook event earlier today, wrote in the event description that rescinding the speaking invitation would be a threat to free speech.

“It would be a tragedy to let Georgetown go down the path of other universities that have allowed students obsessed with safe spaces and echo chambers to prevail at the cost of a diversity of opinions and beliefs,” Howard wrote.

In an email to The Hoya, Howard said the efforts to cancel Johnson’s visit are part of an alarming trend of attempts to limit free speech.

“My hope is that Georgetown University is strong enough to stand up for its convictions and honor the diversity of thought and opinion essential to any university,” Reed wrote. “Students have successfully shut down commencement speakers at other universities, and I would be ashamed if Georgetown fell victim to this assault on free speech sweeping college campuses.”

Multiple student groups have stated their support for UndocuHoyas’ actions, including Hoyas for Immigrant Rights, H*yas for Choice and the Georgetown University Student Association.

“We, the GUSA Executive, support the right of UndocuHoyas and their allies to express their frustrations and disappointment regarding the selection of this year’s SFS commencement speaker, which impacts the graduation experience for undocumented students and students of mixed status families,” Khan and Fisk wrote in a GUSA Facebook post.