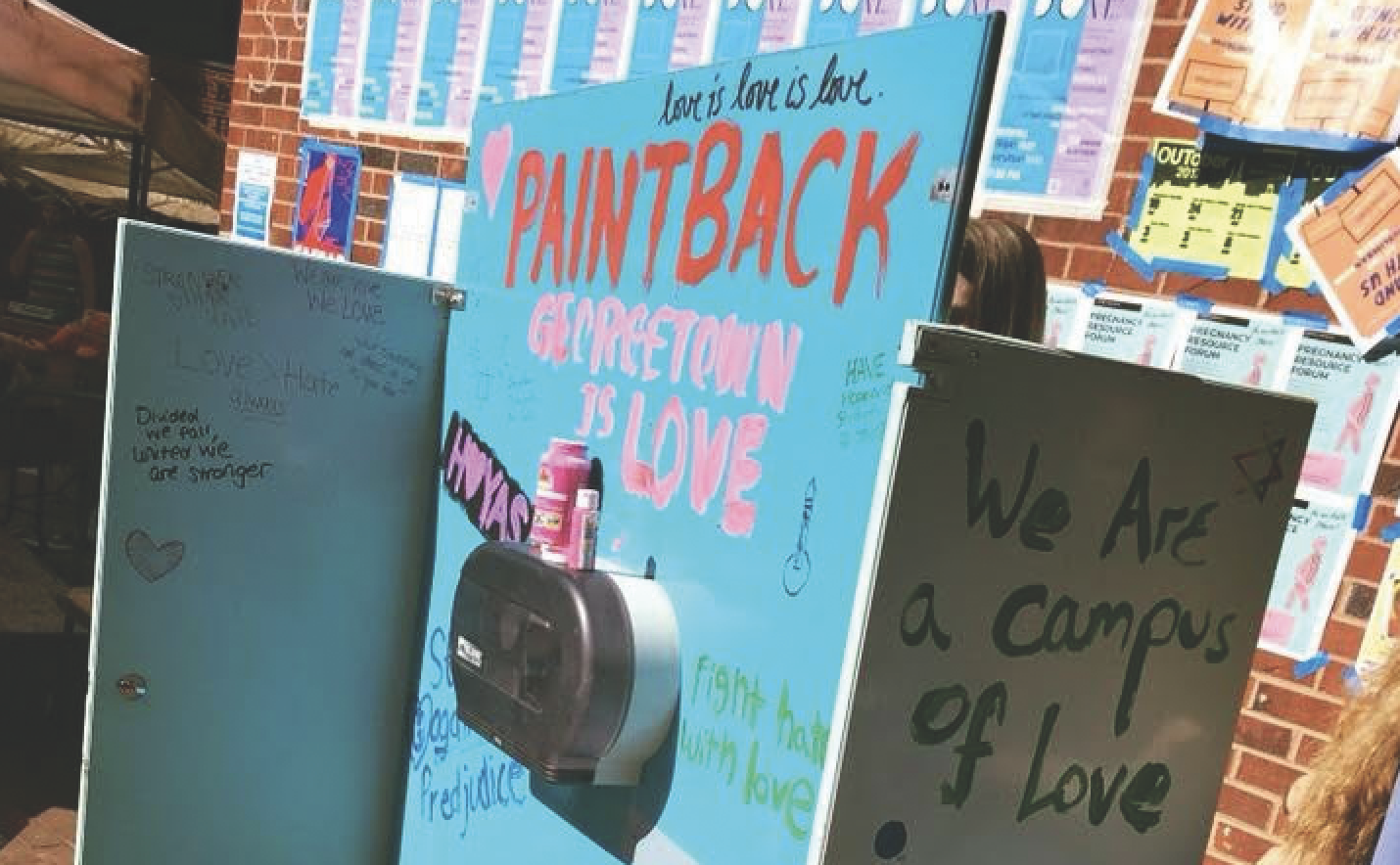 Students are working with Georgetown University administrators to find a long-term location for the Love In”stall”ation, a one-day art installation created October 2017 in the wake of anti-Semitic and misogynistic graffiti found in LXRHall and Village C West in September 2017.

On four separate occasions, swastikas were graffitied on surfaces in several Georgetown residence halls. Swastikas were found twice painted in an LXR bathroom, alongside violent threats against women, as well as in an LXR elevator. An additional swastika was carved into an elevator in Village C West.

In response, Percy Metcalfe (SFS ’19)and Rebecca Kuang (SFS ’18) and Nina Young (SFS ’19) created the Love In“stall”ation to counter the vandalism. The inspiration for the art installation developed from a midterm project the group had during “Media, Arts, and Culture: Fueling War or Creating Peace?,” an upper-level culture and politics course taught by adjunct professor Honey Al-Sayed.

Based off Paintack, a German campaign which sought to transform swastikas throughout Berlin into other illustrations using graffiti, the art piece is a bathroom stall that was on display for one day in Red Square on Oct. 17, 2017. While it was on display, students were encouraged to write positive messages of acceptance on the stall.

“Res Living essentially built a bathroom stall for us in Red Square,” Young said. “GUSA supplied the markers and paint and all the different stuff that students used to draw on it.”

The piece has since sat in GUSA’s Leavey Center office, but the creators are now advocating for it to become a permanent installation at the university.

“This piece could only be created through the kind thoughts and intentions of every Georgetown student who advocates against hate speech and anti-Semitism on campus,” Young wrote in an email to The Hoya. “It is representative of a collective culture that does not stand for hate on our campus. That is why it deserves a place.”

Young, a main proponent for the project’s permanent installation, said she feels it speaks positively to the character of Georgetown’s student body.

“It’s a great testament to the fact that students at Georgetown, despite being incredibly busy, are super supportive,” Young said.

The 11-month gap between the work’s installation and the renewed push for permanent exhibition stems from Young’s absence from campus last semester while she studied abroad, she said.

The project was relocated to the GUSA office in the Leavey Center during her absence. Upon her return to campus this summer, she began working with Katie Heather, the associate director of residential education, to have it installed permanently on campus.

“We have had a couple of meetings about it, and I’ve reached out to a lot of different people, and it seems like it’s gonna happen,” Young said. “But I don’t know, because right now it’s under review by — apparently, the President’s office has a committee that decides whether or not student artwork can be displayed on campus.”

Where exactly the project would stand is still up in the air. If approved, it will likely end up outdoors, although that plan presents the risk of damage from weather, Young said.

“If we did put it somewhere outside, somewhere where I feel like it would fit in — somewhere like Alumni Square or something like that — I worry that it would be damaged, so I’d probably have to get some wear-and-tear primer for it if we were going to put it outside,” Young said. “But I’d be perfectly willing to do that.”

When the installation appeared in Red Square, it was monitored by students involved in the project who encouraged passersby to write positive notes on the stall, according to Young.

“I think we were out there for eight hours, or something insane,” Young said. “The entire stall ended up getting covered in really nice notes, drawings, messages. We felt like it was a success.”

Although Young was not a member of the group that thought of the idea for the initial class project, she was the strongest voice pushing for the project’s implementation, Metcalfe said.

“Nina — she’s a doer, and literally within an hour of the class ending, she was like, ‘Let’s do this,’” Metcalfe said.

Metcalfe credited Young with the rapid installation of the project in October, which was accomplished just a week after the project was due for Al-Sayed’s class.

“I think [Nina] knows that if you don’t do something really fast with Georgetown bureaucracy, it just never happens,” Metcalfe said. “So she was like, ‘Go, go, go, go!’ And she went, went, went, went.”