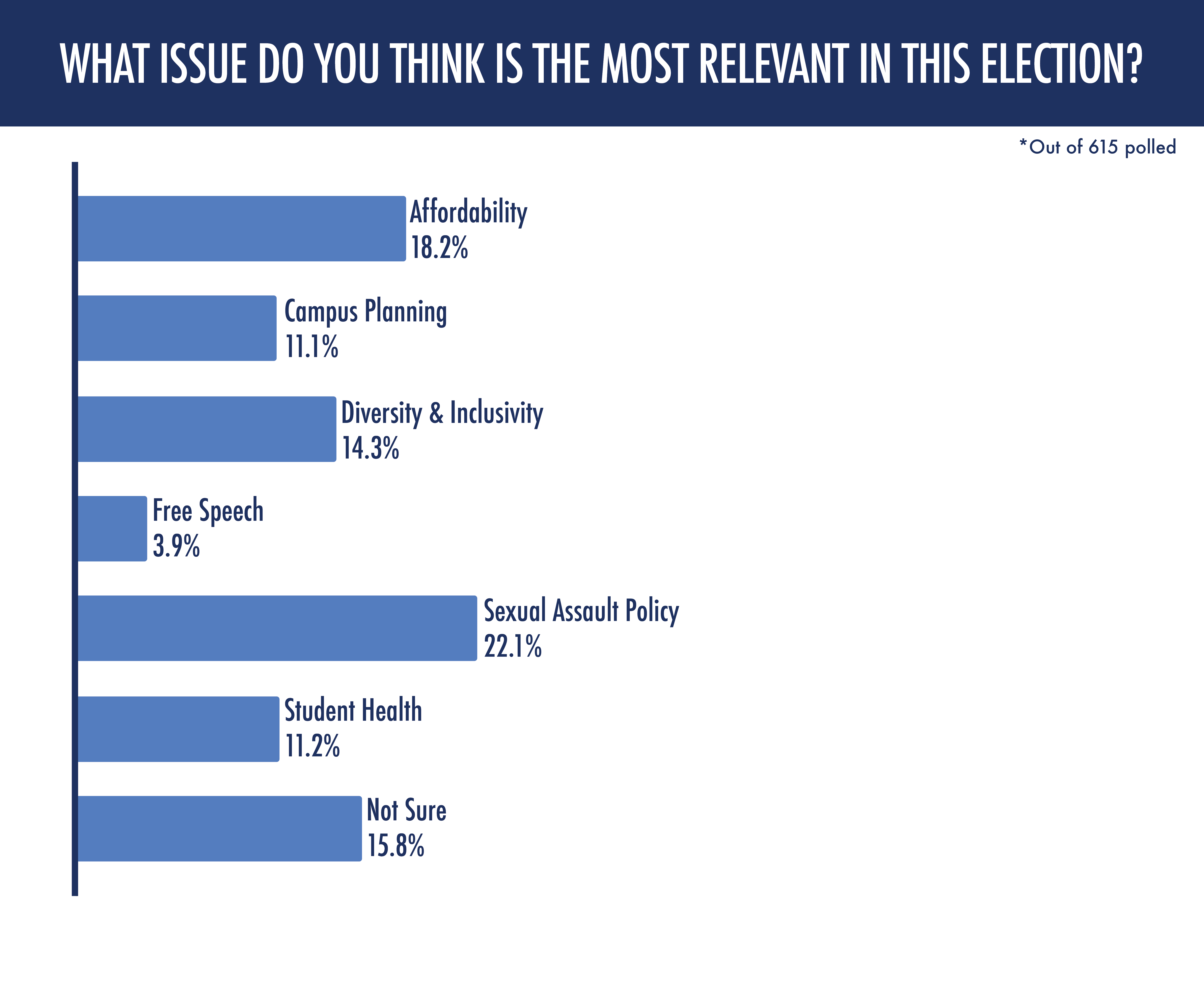 Of the respondents, 2 percent rated their current trust in GUSA as strong, while 38.9 percent listed their trust in GUSA as weak, according to a door-to-door poll of 615 students conducted by The Hoya on Wednesday evening. 35 percent of respondents said they were uncertain.

Outgoing GUSA President Juan Martinez (SFS ’20) also expressed concerns about how many students will go to the polls. 58 percent of respondents said they planned to vote in today’s election, while 42 percent said they are not planning to vote.

“I’m kind of worried for this vote count, just seeing the enthusiasm or the attention given to these elections,” Martinez said at The Hoya’s post-debate analysis Tuesday. “I’m wondering how many people are going to turn out at the polls, how many people are actually going to vote and how is that going to impact the person who gets elected, or how is that going to give more credence to this movement about abolishing GUSA or maybe just fundamentally restructuring GUSA.”

Overall voter turnout was 39 percent last year and 38 percent in 2017, according to the GUSA Election commission.

In a campaign season dominated by outsider tickets and unprecedented circumstances, candidates are striving to engage students with relevant platforms.

Gray is running for GUSA president without a vice presidential candidate after her former running mate, Sam Appel (COL ’20), removed his name from the executive ballot Feb. 4.

The previous two elected GUSA presidents, Sahil Nair (SFS ’19) and Kamar Mack (COL ’19), had no prior GUSA experience and branded themselves as outsider tickets.

Three of the four tickets have specific policies addressing sexual assault in their campaign platforms. Zuccala and Dolan’s platform does not reference any sexual assault policy or Title IX changes.

While the three tickets who stressed initiatives on Title IX cited the importance of pressuring the university administration during the ongoing search for a Title IX coordinator, Gray’s platform was the only one that included university collaboration on the issue. All three tickets pushed for student outreach, but Francis-Olvera had the most comprehensive plan to engage with student groups.

Students who ranked sexual assault policy as the most relevant issue in this campaign season expressed preference for Gray, followed closely by Francis and Olvera.

Francis and Olvera aim to mandate training on sexual assault prevention and bystander intervention for all GUSA executive officials. The pair also plans to build relationships with student advocacy groups to combat sexual assault through the introduction of Title IX training for leaders of campus clubs and organizations, according to Francis.

“We want to incorporate learning Title IX into bystander training to curb sexual assault or hinder it within club culture,” Francis said at Tuesday’s presidential debate. “There is a lot of ignorance around sexual assault and Title IX on this campus.”

The Nemazi and Wolfe ticket seeks to implement a training program within the Student Advocacy Office, which assists students in navigating the university’s disciplinary policies. The trained student officers would serve as resources to inform survivors on recent Title IX changes as well as the Title IX process.

Though voters indicated affordability as the second most relevant issue, it has not been a major theme in the runup to today’s election. All four of the tickets offer policy elements related to reducing student expenses, ranging from decreasing textbook costs to offering stipends for internships to more broadly lowering student tuition. One of Zuccala and Dolan’s three policy areas focuses primarily on reducing tuition prices for students through decreased club expenses.

Voters’ concerns regarding diversity and inclusion dominated the conversation in both executive debates, with candidates calling for greater outreach to student advocacy groups.

During the Jan. 31 vice presidential debate, Olvera stressed how her and Francis’ experiences as members of marginalized communities have shaped their platform and outreach efforts. Wolfe echoed her opponent, emphasizing GUSA’s role as the link between student activists and university administrators.

The candidates also urged greater student input in Tuesday night’s presidential debate. Gray said she hopes to serve as a resource for student activists to achieve their policy goals and streamline the legislative process among GUSA policy teams. Nemazi aims to support the ongoing policy efforts of student advocacy groups who are already pushing initiatives including accessibility of feminine hygiene products.

With declining trust in the ability of GUSA to address student concerns and four tickets facing a two-week campaign season that came earlier than in past years, the race is expected to be won by a narrow margin.

Gray leads Francis by a 6.6 point margin for GUSA president, according to The Hoya’s poll.

The poll’s narrow margin suggests no candidate will receive a majority of votes in the first round of voting. If no ticket receives an outright majority in the first round, an instant runoff is conducted between the top performing tickets, per GUSA’s single transferable vote system. In this ranked choice system, the ticket with the lowest vote total is eliminated, and their votes are redistributed to the remaining candidates based on voters’ indicated second preferences until one ticket receives a majority.

In past years, election results have been tipped by which candidates are ranked second by other candidates’ supporters. Nair’s 36-vote victory margin in the fourth round of voting followed the 2017 election where Mack won in the fourth round by 34 votes after coming in second place in the first round — one of the closest in recent memory.

Students can vote in today’s executive election online using HoyaLink or at polling stations designated by the GUSA Election Commission in the Leavey Center.