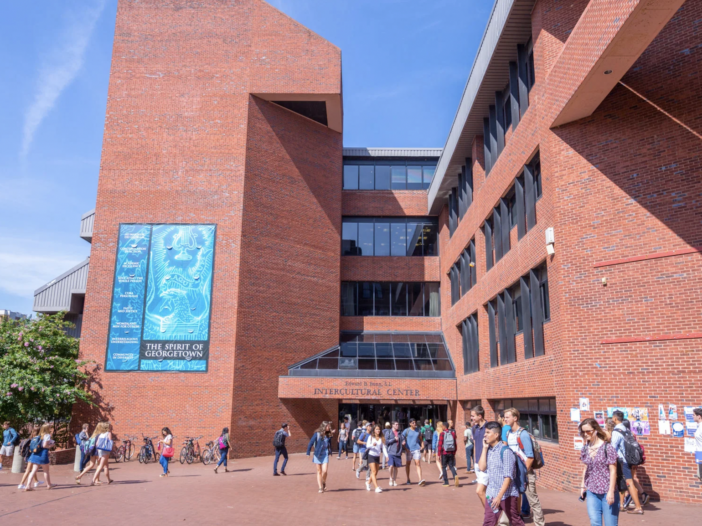 During a celebration for Transgender Awareness Week, students gathered to show their support for transgender people and the LGBTQ+ community after a student group invited a transphobic speaker to campus.

Over 100 students gathered in Red Square to write chalk messages, including “Trans women are women,” “Protect Trans Youth,” and “Justice for the Trans Community,” to show solidarity with the transgender community and to celebrate Transgender Awareness Week, which takes place from Nov. 14 to Nov. 20. The Georgetown University LGBTQ+ Center, Women’s Center, GU Pride and GU Queer People of Color collaborated to organize the event.

The Nov. 14 event titled “Riley Gaines: Protect Women’s Sports” was organized by the Georgetown University chapter of Network of enlightened Women (NeW), an organization whose goal is to create dialogue between conservative undergraduate women. NeW invited Riley Gaines to speak about the inclusion of transgender women in women’s sports. Gaines has been criticized for her transphobic rhetoric — including referring to transgender women as “men” — as well as for calling for the exclusion of transgender women from women’s sports.

Gaines, a former competitive swimmer at the University of Kentucky, first rose to prominence in conservative political circles after she tied for fifth place with Lia Thomas, a transgender woman, in the 200 meter freestyle at the 2022 NCAA Swimming Championships. In the months following the competition, Gaines has made many high-profile appearances where she has spoken against the inclusion of transgender women in women’s sports, including a speech she gave alongside former President Donald Trump at the 2022 Conservative Politcal Action Conference (CPAC).

Liam Moynihan (SFS ’25), who helped organize the Transgender Awareness Week event, said the purpose of the event was to show solidarity with transgender students on campus.

“I was really, really concerned when I heard they were inviting the speaker here,” Moynihan told The Hoya. “Obviously, transphobia has no place on our campus. This event was organized primarily to support the trans and LGBTQ community on campus because we want to emphasize that this is a campus that’s friendly to trans people and is for everyone.”

Matt Shinnick (COL ’25), who attended the Trans Awareness Week event, said the group decided to frame the chalking as a celebration rather than a protest of the NeW event.

“We’re actually making a point of not protesting the event. They are doing this to get attention. We didn’t want to do that. We’re having our own event to celebrate trans voices on campus, to show people that they are welcome, but we’re very pointedly ignoring them,” Shinnick told The Hoya.

Sebastian Cardena (COL ’26), who also attended the Trans Awareness Week event, said giving a platform to people who perpetuate hateful rhetoric harms students who are a part of the LGBTQ+ community.

“Whether or not these speakers should be allowed on campus is not the relevant question, it’s more so understanding that by inviting them, you are actively harming peers, friends, possibly family and just communities in general,” Cardena told The Hoya.

“Both NeW as an organization and our student board condemns transphobia. Our decision to host the competitive swimmer Riley Gaines was not motivated by any other reason than our desire to host speakers on a wide variety of topics that affect women today,” Costescu wrote to The Hoya. “At Georgetown we pride ourselves on our mission to support freedom of speech and NeW allows conservative women to do just that on a campus that is far too often hostile to our beliefs.”

“What I didn’t really appreciate was the victimizing of a cisgender white woman who has been privileged her entire life being upset that someone who has been discriminated against is receiving something that they equally deserved,” Ransom told The Hoya.

Lee said the gender identity of her competitors isn’t relevant during games.

“If I lost in a competition, I would be upset, but not because it was a trans woman who won,” Lee told The Hoya. “I’d be upset because we just lost a big competition.”

At the NeW event, Gaines said allowing transgender women to compete in women’s sports is unfair. “I think it’s pretty obvious that men are just inherently stronger, taller,” Gaines said at the event. “You have more power, more endurance and are faster than females when it comes to sports. I think denying that denies logic.”

Lee said these biological differences are an inevitable part of all sport competitions.

“There’s this whole biological aspect throughout about how Lia Thomas is 6’4 and has muscles. But I’m 6’4, and I’m a cis woman. I could be stronger than most. Those are inherently advantages and disadvantages in sports already,” Lee said.

It is important to treat transgender athletes as people, not antagonists, Ransom said.

“Stop perpetuating transgender women as a danger,” Ransom said. “They’re not dangerous, they’re not antagonizing. They’re not purposely, maliciously going out of their way to be outcasts. Their life is more than just playing the sport they’re playing, so their lifestyle goes beyond their sport.”