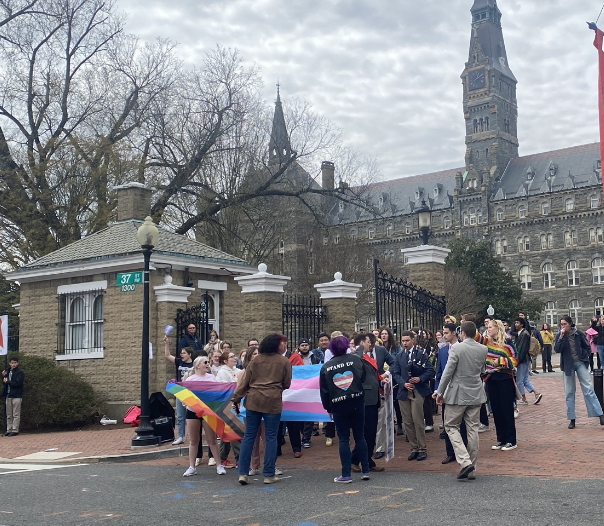 When Siena Hohne (COL ’22) discovered transphobic protesters had gathered outside of Georgetown University’s front gates, she immediately put on her “Homo Saxa” sweatshirt and brought a speaker to the front gates, where she blared Lady Gaga’s “Born this Way.”

Hohne was joined by around two dozen other Georgetown community members to oppose a group of protesters from the anti-LGBTQ organization American Society for the Defense of Tradition, Family and Property (American TFP). Around 11 TFP representatives had gathered around noon April 4 outside Georgetown’s front gates at 37th and O St. NW, holding signs that read “God created them Male & Female. Stop the ravages of transgender ideology.”

With origins dating back to 1971, the American TFP, which is part of a larger international TFP, describes itself as “an organization of lay Catholic Americans concerned about the moral crisis shaking the remnants of Christian civilization,” according to the group’s website. TFP did not respond to The Hoya’s request for comment.

Hohne, former co-president of GU Pride, said it is important that students joined the counterprotest to stand in solidarity with transgender people, especially given the rise of anti-trans bills being introduced across the country.

“The counterprotest is a really essential thing for allies to do to show that we do love trans folks here, that we love kids — that we are not going to let these people get away with spreading lies and hate, just ruining people’s day,” Hohne told The Hoya.

The American TFP strongly opposes gay and transgender rights, and “pro-homosexual clubs on Catholic college campuses,” according to their website.

For transgender students at Georgetown like Elliott Lloyd (COL ’24) the presense of transphobic protesters outside of Georgetown’s front gates was especially distressing.

“This incident was particularly disturbing just to see how much hate people really have,” Lloyd said in an interview with The Hoya. “And as an openly trans student on campus, it definitely did not make me feel safe to go to that protest.”

Lloyd, who joined counterprotesters after hearing about it in the “Gaytown” Georgetown student GroupMe, a group chat, said it is important to stand in solidarity against transphobia, especially given the rise of anti-transgender legislation being introduced across the country.

“We want to stand up so that trans students at Georgetown know that we’re welcome and an important part of the community,” Lloyd said.

Georegetown has no affiliation with the TFP, according to a university spokesperson, and condemns the beliefs of the organization.

“As an institution that values interreligious understanding, inclusion and respect for all persons, we find the viewpoints of this group offensive, degrading and hateful,” the spokesperson wrote.

Gracie Coughlin (COL ’22), who joined counterprotesters at the front gates after hearing about the transphobic protest from a friend, said protests like these are harmful to students.

“People telling you that your identity isn’t real is just really hurtful to students. And trans people have been facing this for all of time. So I feel like we’ve got to stop,” Coughlin said in an interview with The Hoya.

Transgender people, especially transgender people of color, have historically been excluded from the LGBTQ community, even though those communities have been at the forefront of the fight for LGBTQ rights for decades. Through the civil rights movement of the 1960s and 1970s white, cisgender gay and lesbian rights activists acively excluded trans people from their activism.

Georgetown’s LGBTQ Resource Center, which provides support for LGBTQ members of the Georgetown community, condemned the TFP protests in an April 5 email.

“However, what we witnessed yesterday is a clear example of what many Trans people live with on a daily basis, we witnessed the hatred and bigotry that continues to be present in our country,” the LGBTQ Resource Center wrote in the statement. “We want to remind all our Trans students that you belong here, you are welcomed, and you are loved.”

The university could not take action against protesters standing outside of campus grounds, according to a university spokesperson.

“While external protestors have the right to stand on the sidewalk outside of the front gates, which is public property, they are not permitted to enter campus,” the spokesperson wrote. “GUPD officers continuously monitored the situation to ensure protestors remained off campus property.”

“I’m facing a lot of transphobia, pretty much on a weekly basis. I’ve been called a lot of slurs here. I faced a lot of harassment. And that sort of made me a little frustrated to see some of the same people who hadn’t really done anything in those instances show up sort of only in this case, when it was protesters from outside Georgetown,” Lloyd said.

The campus community has the responsibility to fight transphobia everyday, Lloyd said.

“I sort of wish that people would also make an everyday commitment to looking at how they can fight against transphobia. And other moments in their life, not just moments like these,” Lloyd said.

CORRECTION: This article was updated April 8 to remove language which stated that the Georgetown University Police Department did not respond to The Hoya’s request for comment, as the university spokesperson speaks for the department.