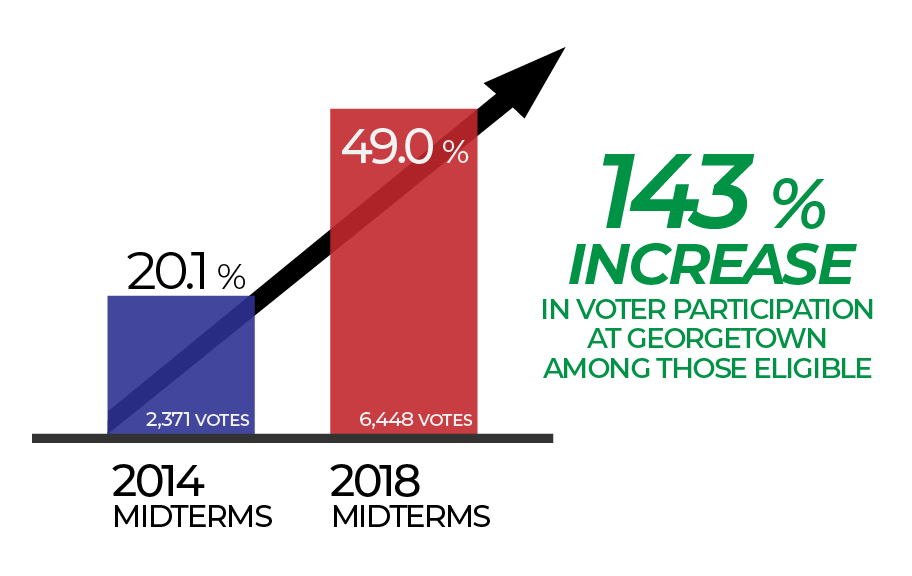 Grace Ring (COL ’21), though, has to decide whether she is prepared to fly home and miss whole days of class to participate in Nevada’s caucus, which does not allow absentee ballots.

College students across the United States face a unique set of obstacles when trying to vote. Convoluted registration instructions, bureaucratic mishaps and unclear deadlines can hinder and disincentivize students from casting a ballot and exercising their constitutional right. At Georgetown University, student organizations and activist groups are attempting to bridge the gap between campus and the ballot box through events that aim to educate students and facilitate the absentee ballot filing process.

Despite representing an increasingly politically active demographic, college students face significant hurdles as they attempt to vote from their campuses. For those who opt to vote in their home state, unclear and inconsistent absentee ballot policies annually threaten to bar many students from voting.

College students who cannot vote in person at their designated polling places must vote using the complicated absentee process, according to Andrew Straky (COL ’20),  co-president of GU Votes, a student-led initiative under the university’s Institute of Public Politics and Public Service.

“The absentee ballot process is uniquely difficult in this country,” Straky said. “It should be as easy as going online and requesting a ballot, but no. You not only have to get registered to vote, you have to take all these additional steps to even get a ballot in your hands.”

Voters must submit an absentee ballot request form to their county office by mail or in person, await the mailed absentee ballot and submit the completed ballot in order to vote. Each state’s absentee ballot system varies, however. While some states allow online registration, Arkansas state law requires voters to include a copy of their state ID in their absentee ballot application.

Certain states have extra requirements that can result in the disqualification of ballots. For example, voters have complained that hundreds of ballots were rejected in Georgia in 2018 because the signature on the ballot did not match exactly the signature that was on file, a requirement that still stands in multiple states.

The absentee system’s complex rules can be overwhelming for students, according to Yael Bromberg, a constitutional rights attorney who worked as a teaching fellow at the Georgetown University Law Center’s Civil Rights Clinic and Voting Rights Institute.

“These rules can be very tricky for first time voters who’ve just turned 18 and don’t know how to navigate the system, especially when it’s so state-by-state,” Bromberg said.

Some college students, however, would rather avoid the hassle of an absentee ballot and vote in the state where they attend school instead. As a result, many state legislatures have implemented regulations that voting rights activists argue are targeted specifically to limit college students’ participation.

One example can be seen in New Hampshire, where a law recently upheld by the New Hampshire State Court mandates all voters declare residency as part of registering to vote in the state. For students who come from out of state, this law could require them to register their car to New Hampshire and pay the accompanying fees, which many have argued amounts to a poll tax.

Voting in Washington, D.C., is comparatively easier, and students can be eligible to vote in D.C. elections. College students in the D.C. area are able to formally vote after 30 days at their campus address, according to the District of Columbia Board of Elections website. However, a lack of federal representation and shortage of local elections leads many Georgetown students to still request an absentee ballot.

Whether it is from discouragement, missed deadlines or even mistakes on part of local governments, many students who could have voted report they were unable to.

Often, states demand absentee ballot request forms up to a week before a given election day. As a result, students busy with classwork or campus life tend not to have a good understanding of the sudden deadlines, according to Straky.

“Most students aren’t thinking about voting in August,” Straky said. “They are getting ready for school. It’s only in October, when things start to pick up, that people are like, ‘Oh wait, I need to take all these steps to vote,’ and often there’s no time left.”

For some elections, first-time voters must make sure they have registered months in advance, according to Christopher Stauffer (SFS ’22), a resident of New York.

“You have to go through this entire process and sometimes you don’t know the deadlines,”  Stauffer said. “If you want to vote in New York in the presidential primaries next year, you have to register in October of this year to vote.”

Though Ring herself was able to vote in the midterm elections last year, many of her friends from home could not in Nevada, which was recently ranked 30th state in a study on voting ease and state laws.

“I know a lot of my friends who attend school out of state who didn’t vote because they didn’t register early enough, or know to request an absentee ballot,” Ring wrote in a message to The Hoya.

Unfortunately, even if a student is proactive and able to navigate the complexities of absentee voting, a voter’s ballot can still be lost or misplaced. Depending on the individual county’s capability to process ballots, requests, even if submitted on time, sometimes never get processed correctly. Students nationwide report missing ballots that never came.

Despite following all the requirements, Stauffer and Kiara Chiddick (SFS ’22), a resident of Massachusetts, both reported their ballots did not come before the 2018 midterm elections. Though she understands the process, no information was given about the status of her specific ballot until it was too late, Chiddick said.

For some students looking toward the upcoming 2020 primaries, an absentee ballot will not be enough to make sure their vote counts. Certain states hold caucuses instead of primaries, which instead require in-person attendance in order to select delegates for a party’s nominating convention.

Though early voting options make voting more viable for some Nevadans, Ring still doubts she will be able to participate.

“This year they’re offering early voting options, which does help make the election more accessible, but they’re still in person, so a lot of the barriers are definitely still present,” Ring wrote. “If I want to be able to caucus in the primary, I’ll have to fly across the country on a 2-day weekend in February. It’s both a time crunch and incredibly expensive, and it’s a huge obstacle to civic participation.”

Looking forward to the primary elections next spring, student groups and activist organizations have been pushing to simplify the voting process and help students deal with voting difficulties.

The group has installed absentee ballot dropboxes, which come equipped with stamps and envelopes, at locations across campus, where students can drop off absentee ballot registration forms. Dropboxes can be found in the GU Politics Office, the SFS main office, the Georgetown Scholars Program office, Hilltoss and Midnight Mug, among other locations and are active through Oct. 24.

In cooperation with the Andrew Goodman Foundation, a nonprofit advocating for voting accessibility, GU Votes has also launched a revamped online voter portal through which students can register to vote, check their registration status and find absentee ballot registration forms.

According to preliminary reports from the National Study of Learning, Voting, and Engagement, a survey of college voting rates conducted by the Institute for Democracy & Higher Learning at Tufts University, the voting rate among eligible Georgetown students rose from 20.1% in 2014 to 49% in 2018. The 2018 voting rate dipped slightly from 2016, a presidential election year, when it hovered near 64%.

GU Votes and other groups on campus have been working to meet increased engagement and make it easier for students to cast their absentee ballots, according to GU Votes operations director Sarah Bryant (SFS ’22).

“Students overall are wanting to be more engaged,” Bryant said. “Seeing that increased student engagement has made it even more of an urgent and critical time for groups like ours to be working on campuses to really help meet that.”

Groups like GU Votes and the Institute of Politics and Public Service help encourage students to vote, but the lack of similar resources at other universities may contribute to continued confusion among voting procedures on college campuses, according to Ring.

“Georgetown has a lot of programming that encourages civic participation and helps to lower some of those barriers, but most schools aren’t as actively political,” Ring wrote.

Despite improvements in engagement, absentee ballots and stringent state regulations continue to make it difficult for students to vote. Data from 2016 indicates that while 90.4% of eligible Georgetown students were registered to vote, only 71.1% did so. Absentee ballot complications play a large part in this disparity, according to Straky.

“You should be able to vote on election day and not have to think about it well in advance,” Straky said. “We’re trying to make that a little bit more of a reality.”