The Georgetown University Latin American community has come together to support Puerto Rican students and to raise funds and awareness for the island following the devastation Hurricane Maria wrought two weeks ago.

Students at the University of Pennsylvania launched a GoFundMe page Sept. 20 titled “Students with Puerto Rico” to raise $15,000 to donate to Unidos por Puerto Rico, a public-private initiative started by the Office of the First Lady Beatriz Roselló and a group of companies to help the victims of the hurricane.

Georgetown students were among the first to join the efforts, raising over $1,000 in the span of one day. Paola Mendez (COL ’18), the Georgetown representative for Students with Puerto Rico, said she jumped at the chance to help facilitate broader awareness and support for disaster relief.

The group reached their goal within the first 24 hours, as more student groups from universities across the country joined the effort. As of Thursday, the page had raised over $170,000, including a donation of $20,000 that came from NBC talk show host Jimmy Fallon.

Mendez, who was born and raised in Puerto Rico, said she wanted to make a difference from far away.

“I know so many people that couldn’t talk to or hadn’t heard from their families, and it’s so hard not being home or knowing what’s going on when such a bad thing is happening,” Mendez said. “From here, raising funds and awareness is really the only thing you can do. We’re just trying to do everything that we can from abroad.” 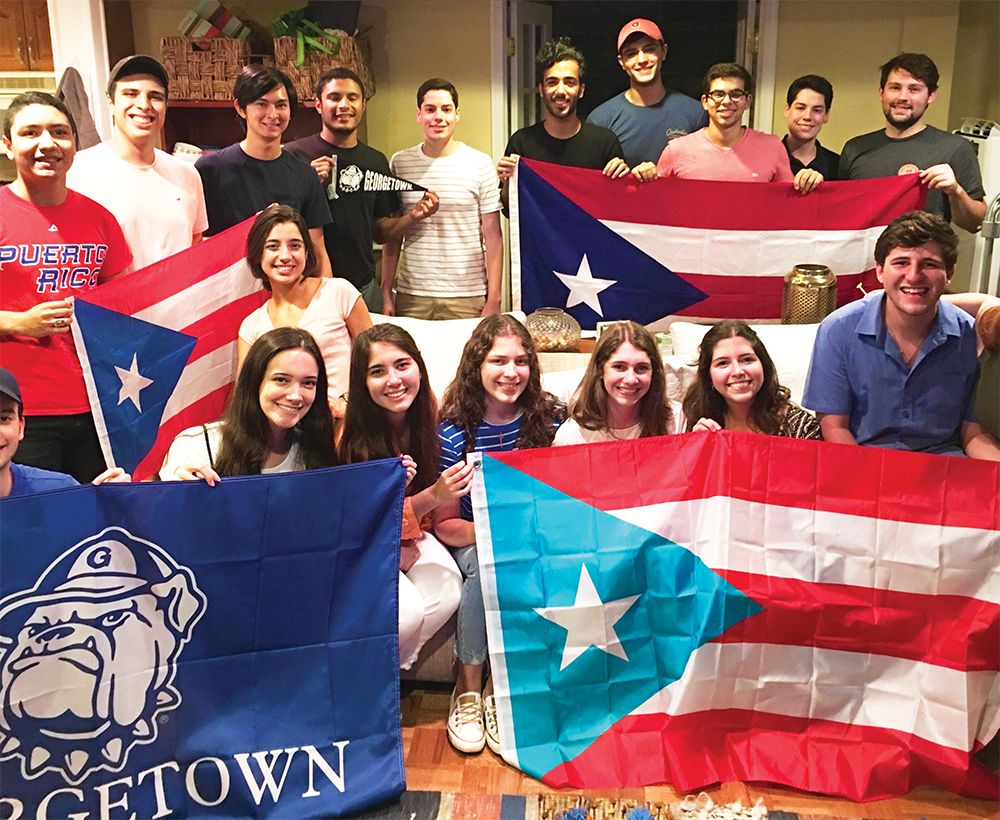 Omar Torres (COL ’18) has worked with Mendez over the course of the past few days to coordinate with student groups, administrators and the rest of the Puerto Rican community at Georgetown.

Mendez and Torres met with President John J. DeGioia last week to discuss the university’s response and their efforts to engage the broader Georgetown community in the effort. The President’s Office is coordinating a Sunday Mass fundraising event, in which all funds from collection will go toward disaster relief efforts.

Torres, also a Puerto Rican student, said that while the response from the community has been heartening, there is a long road ahead, and it is important to continue the efforts to maintain support for the island.

“[I want] just to raise awareness that people don’t forget about us. It’s easy to be dragged away by other headlines, but at the end of the day — and it’s sad that we have to say this, but we do have to say this — Puerto Ricans are American citizens. Just like someone from Texas or Florida is a U.S. citizen,” Torres said.

Various student groups, administrators and even Georgetown alumni have reached out to them to discuss ways to expand the efforts and develop long-term goals, like potential service trips and reconstruction projects, Mendez said.

“We obviously know that once this story is not a part of the news cycle anymore, there’s going to be a need to fill that [publicity] void and so we want to keep raising awareness and keep moving forward,” Torres said.

David Santos (COL ’19), who has also been involved in the fundraising efforts, said he was encouraged by the responses from the Georgetown community.

“It was really surprising to see how much support people gave us. My dean, Sue Lorenson, professors and many students have all reached out to express concern and offer assistance,” Santos said. “I think it showed how much good a group of people can do when they come together for a cause.”

Santos said that this kind of effort is indicative of the ways that the university community can unite in moments of crisis.

“I think it is important that we all work to make the Georgetown community one where people feel they can reach out for help and receive a united and strong response,” Santos said. “Therefore, the way we respond to disasters that hurt others is what determines how we build a supportive community.