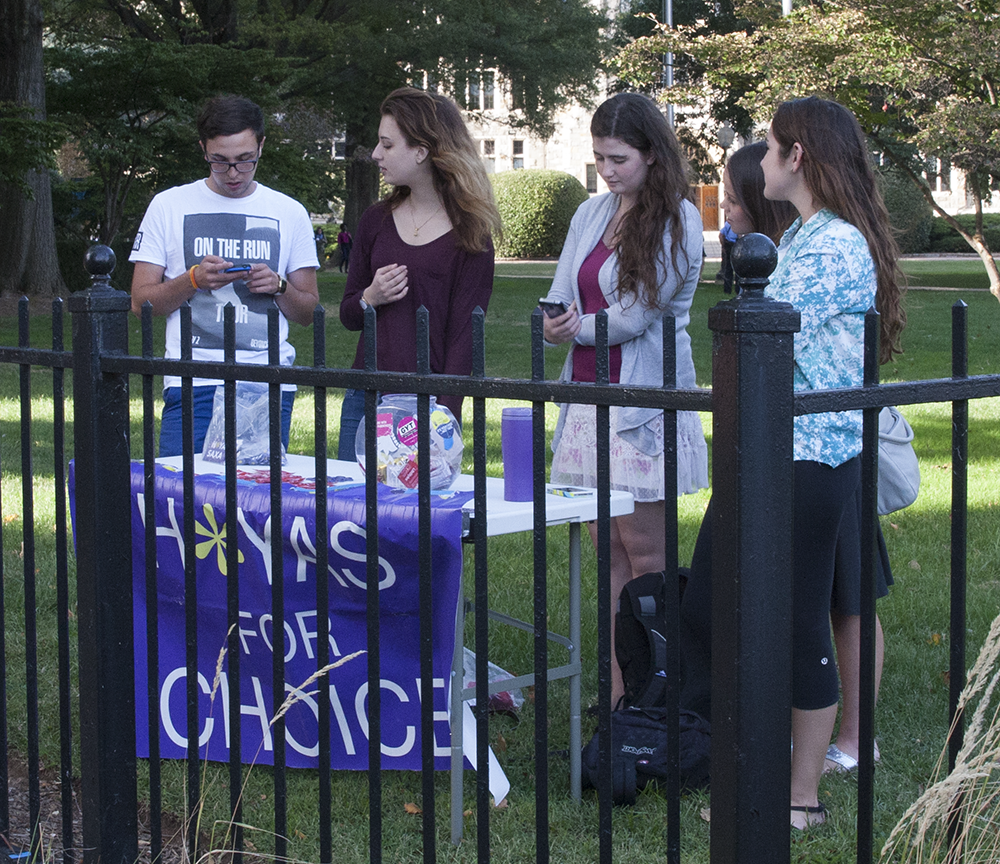 The Foundation for Individual Rights in Education listed Georgetown as one of the worst 10 colleges for free speech in the country in its rankings released in March. This appellation was but a step in a long-running discussion about free speech highlighted by frequent clashes between student activists and the university administration.

After an incident in January 2014 in which unaffiliated campus group H*yas for Choice was relocated from protesting in Healy Circle to a location just outside the front gates, prompting discontent about the ambiguity in the existing policy, the university released an updated speech and expression policy in May 2014. The policy was the result of a memorandum of understanding between Vice President for Student Affairs Todd Olson and newly appointed Georgetown University Student Association President Trevor Tezel (SFS ’15) and Vice President Omika Jikaria (SFS ’15).

The changes, made with input from former GUSA President Nate Tisa (SFS ’14) and the Speech and Expression Committee, attempted to clarify the policy in four ways: designating Regents Lawn, the lobby of the Leavey Center and the Healey Family Student Center as “public squares” for student free speech, expanding beyond Red Square; increasing the efficiency of the classroom reservation process; permitting protest anywhere on campus provided no other campus policies are violated; and expanding the role of the Speech and Expression Committee by allowing it to review student complaints and ensure fair and accurate application of the policy.

“The changes have been useful and have helped create a predictable and clear context for our students to express their views,” Olson wrote in an email to The Hoya. “We are committed to continuing to monitor and review how the policy is working in practice.”

This academic year, the speech and expression policy has been tested in a variety of ways. Tezel believes that it should remain fluid and subject to future revisions.

“I think it’s a document that is constantly having to be looked at and reworked,” Tezel said. “I think both the student affairs administrators as well as the students on the committee are committed to … really looking at it from a theoretical, academic, thoughtful approach in order to best administer the policy.”

The first came in September, when H*yas for Choice was once again removed from tabling by the Georgetown University Police Department, this time from the off-campus public location where GUPD officers had relocated H*yas for Choice members in January 2014.

GUPD Chief Jay Gruber later apologized for the misapplication of the free speech and expression policy.

Former H*yas for Choice President Abby Grace (SFS ’16) said that this event galvanized clarification to the speech and expression policy after the club submitted a formal complaint to the Speech and Expression Committee.

“I think that our biggest challenge was when we were kicked off of campus in the fall. Well, we were kicked onto campus,” Grace said. “Fortunately, after that, we were able to bring a really substantive complaint against the Speech and Expression Committee and highlight a lot of work that still needed to be done.”

The policy misappropriation also sparked the creation of a separate group, Hoyas United for Free Speech, in October. The group, founded by former H*yas for Choice Vice President Vincent DeLaurentis (SFS ’17), created a petition with demands for the university to expand free speech zones on campus, particularly to Healy Circle. Around 460 community members signed the petition, presented to Olson in early November.

The Speech and Expression Committee issued its first official opinion in October in response to H*yas for Choice’s complaint. It stated that the complaint had merit and provided advice and support to both GUPD and Student Affairs in the clarifications of the policy.

The committee began training GUPD officers on the policy and handling student protestors in October, encouraging them to confer with the Center for Student Engagement before taking action.

“We’re all hoping that will ensure regularity in the enforcement of the policy,” Speech and Expression Committee member Sam Kleinman (COL ’16) said.

Olson officially clarified the speech and expression policy in a campus-wide email sent in November. The email included a tabling map of “public squares,” expanded to include Library Walk, Copley Lawn, the Alumni Square courtyard and the patio between Darnall Hall and Henle Village.

DeLaurentis said that although he was pleased with the clarification of the policy, he believes that further changes should be made in the future.

“I think the policy is basically fine,” DeLaurentis wrote in an email. “I would love to see an expansion of protected tabling zones to areas into Healy Circle. I’d also like to see greater student representation on the Speech and Expression Committee and to place greater checks on the VP for Student Affairs’ control of the policy.”

Grace said that H*yas for Choice will continue to push for reform to the speech and expression policy.

“I will never be happy until we’re allowed to table in Healy Hall,” Grace said.

The effects of the policy clarification on H*yas for Choice were seen in late January when the club protested the Cardinal O’Connor Conference on Life for eight hours in Healy Circle without disruption.
Discussions cropped up surrounding free speech later in the academic year, as well.

In February, the Georgetown Voice published a cartoon that students said depicted racial and gender-based violence between GUSA executive race candidates, prompting a town hall meeting and protest about satire, race relations and free speech. The Speech and Expression Committee received a complaint about the cartoon but has yet to issue an opinion. Kleinman said that the group expects to release its opinion on the issue before the end of the academic year.

Most recently, in March, GU Fossil Free stormed the Gaston Hall stage during a speech from World Bank President Jim Kim. The three students were escorted from the stage by Director of Student Conduct Judy Johnson and members of GUPD, and were charged with student conduct violations. After meeting with Johnson and submitting a letter of appeal, member Patricia Cippolitti (SFS ’15) said that she has not yet heard anything back from the university, which she said leads her to believe that the charges have been dropped.

“I think that we were totally in our right and within the purview of the university’s speech and expression policy,” Cippolitti said. “We were silent. We merely held up a banner and we weren’t obstructing anyone’s view or the speaker’s ability to speak. I think that the time, place and manner of that act of protest was appropriate to our message and to the event.”

Cippolitti said she hopes that Georgetown students continue to exercise their right to free speech on campus and protest to inspire change.

“I do agree that we shouldn’t be disrespecting people or in any way shape or form degrading the message of others, but we shouldn’t be afraid to put our perspectives out there, especially if they are on the side of justice,” Cippolitti said. “I hope to see students in the future more willing to take those risks if they are furthering the common good.”