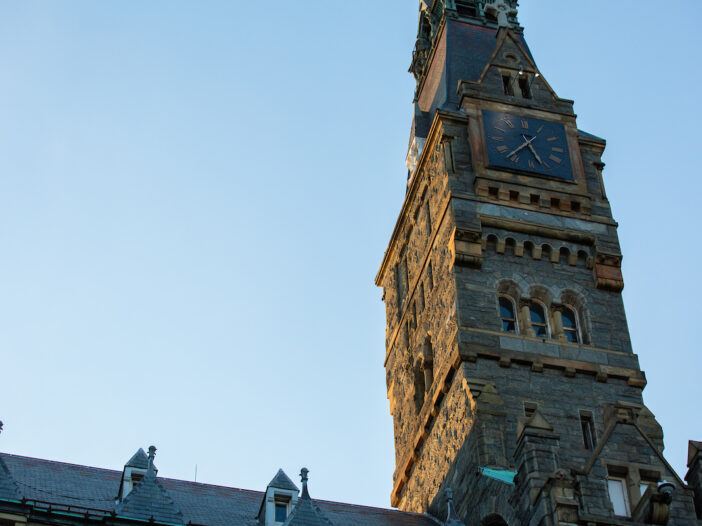 Several students have signed a letter demanding Georgetown University investigate its endowment to screen for the presence of ties to human rights abuses in China.

The Jan. 23 letter, titled “An Open Letter Calling for Divestment from Ongoing Genocide and Crimes Against Humanity,” calls on Georgetown University to divest the university’s endowment from companies that are linked to the repression and forced labor of Uyghurs and other ethnic groups in China. The letter was co-authored by the Muslim Student Association (MSA) and the Hong Kong Student Association (HKSA), alongside individual students from across the campus community.

Georgetown has a duty to investigate any potential financial holdings related to the Chinese government’s abuse of Uyghurs, according to Christopher Boose (COL ’22), who helped to prepare the original letter.

“Even if the University thinks its investments are clean, they have a duty to check and publicly commit themselves against the Uyghur genocide,” Boose wrote to The Hoya. “At a school as proud of its values as Georgetown, there’s no excuse for not taking a stand on an issue as fundamental as genocide.”

The letter was modeled after similar demands by students at the Catholic University of America, according to Boose, who also said students at universities across the country have also called upon their respective schools to cut financial ties with Uyghur human rights abuses.

The Chinese government has persecuted Uyghurs and other Turkic, Muslim-majority groups for decades in the Uyghur Region, which the Chinese government refers to as Xinjiang. China’s current policies include the arbitrary detention of up to one million people, mainly Uyghurs, severe restrictions on religious practice and repressive population control, including forced sterilization. Hundreds of international companies — including Apple and Microsoft, which Georgetown holds stock in — are at a high risk of taking part in the forced labor of Uyghurs.

Georgetown has a moral responsibility to divest and ensure it’s endowment is not tied to genocide, according to John Metz, executive director of the Athenai Institute, a bi-partisan student-led non-profit that seeks to limit Beijing’s influence on U.S. college campuses. The institute helped prepare the Georgetown letter.

“Divestment is a practical and moral necessity,” Metz wrote in an email to The Hoya. “By divesting, Georgetown has an opportunity to ensure its financial independence from a genocidal regime.”

The university should consider human rights in all of its investments, according to a statement from the HKSA board.

“We encourage the University to consider the human rights implications of all its investments, programs, and activities — whether this be in Xinjiang, Hong Kong, or anywhere else in the world,” the HKSA statement read.

The Muslim Student Association did not respond to The Hoya’s request for comment.

Georgetown students should support efforts to investigate the endowment, according to Matteo Caulfield (COL ’23), president of GBC.

“Holding China accountable for its violations of basic human rights is a cause we should all get behind no matter our political background in the United States,” Caulfield wrote to The Hoya. “As Georgetown students, we have the responsibility to reflect on our global impact and eradicate any connection we bear to international crimes.”

The Georgetown University Student Association (GUSA) Senate unanimously passed a resolution at a meeting held Jan. 31 requesting the university to provide more transparency about the endowment.

GUSA Senator Dominic Gordon (SFS ’24), who co-sponsored the resolution after signing onto the letter, said any ties to the Chinese government’s atrocities against the Uyghurs is unacceptable.

“This issue is important to me because as a Jewish American, I firmly believe that no ethnic group should ever face an attempt to eliminate it. I believe that the Chinese government’s behavior points to that direction,” Gordon wrote to The Hoya.

It’s essential that students raise this issue whenever possible because a sustained dialogue will be critical to find ways to respond to these atrocities, according to Peter Irwin, a senior program officer at the Washington, D.C.-based advocacy group the Uyghur Human Rights Project.

“The first step for Georgetown — or any institution for that matter — would be to meticulously review their investments to ensure there is no connection to the treatment of Uyghurs,” Irwin wrote in an email to The Hoya.

The composition of endowments sends a message, according to Jeffrey Ngo (GRD ’24), a doctoral candidate studying history, who signed the letter.

“How an educational institution allocates its endowment sends a powerful message about the social values it endorses,” Ngo wrote in an email to The Hoya. “Our university community is diverse. Many members — including Hong Kongers like me — are directly facing the repression of the Chinese government every single day.”

“Georgetown’s Socially Responsible Investing Policy (SRI Policy) aligns the university’s investments to protecting human life and dignity, as well as social justice and the promotion of the common good,” the spokesperson wrote in an email to The Hoya.

The SRI policy, which was put into effect in June 2017, was established by these guidelines, according to the spokesperson.

The push for the university to investigate the endowments offers students the ability to protest the actions of the Chinese government within the campus community, according to Ngo.

“The divestment campaign offers a potential for me to make an impact for a cause that’s personal to me — in this case, protesting genocide perpetuated by the Chinese government against Uyghurs in Xinjiang — while focusing on my own university community. That’s why I’m doing my part to push the letter forward by signing it and spreading it,” Ngo wrote.

This article was updated on Jan. 3 to include additional sources and correct the spelling of “Uyghur Region.”