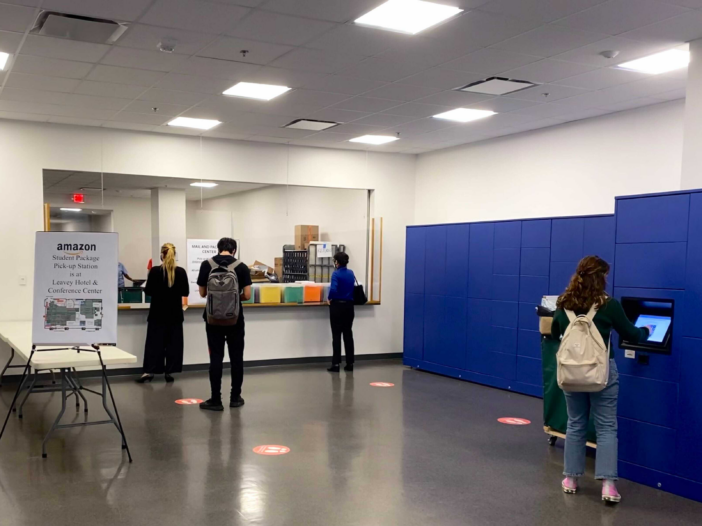 Students have expressed frustration over significant delays in receiving packages from the Georgetown University mailroom.

The Georgetown University Mail Services Department has experienced delays after receiving an unprecedented amount of packages, sorting through more than 3,000 packages a day since classes began last month, according to a Sept. 8 email sent to the Georgetown community from Marc Fournier, vice president for Auxiliary Business Services.

“We have experienced unprecedented package volume at the start of this semester. Our staff members are working overtime, including weekends and holidays, to process and sort each package that comes in, but there will be delays between the shipment and your receipt of packages,” Fournier wrote in the email.

When asked for comment, a university spokesperson redirected The Hoya to Fournier’s email.

On March 5, 2020 — just days before the transition to online classes March 11 — the university announced it would be eliminating Residential Hall Offices and converting to smart lockers for package distribution. These offices were staffed by students and carried out a variety of responsibilities, including distributing packages and leasing dorm appliances. Community members raised concerns about the subsequent loss of student jobs; the issue was never fully resolved as the COVID-19 pandemic caused the shutdown of on-campus operations.

Now, package distribution is streamlined through the Mail Services Department and three smart locker locations on campus. To help alleviate mailroom service delays, the university has set up a temporary Amazon parcel pickup center in the Georgetown University Hotel and Conference Center. Students will receive an email directing them to retrieve their packages from the conference center location once their mail has been processed.

Delays have been particularly frustrating for Bernard Medeiros (COL ’24), who waited days to receive his medication after it arrived in the mailroom.

“I think it sat in the mailroom for six days after having arrived,” Medeiros said in a Zoom interview with The Hoya. “And that was after it got lost in the mail for a bit. So I was without my medication for maybe two or three weeks.”

Although he received confirmation from the U.S. Postal Service that his package had been delivered, Medeiros said Mail Services would not allow him to pick up his package or expedite the process.

“I tried going to the mail people after it arrived to see if there was any way to expedite the process even though it was backed up. They said no, and I just had to wait,” Medeiros said.

Other students have experienced similar issues receiving their packages, including Elizabeth Smith (COL ’24), who has not received her textbooks after the Postal Service confirmed her package was delivered in August.

“My mom sent me my textbooks on the day I left. So it was August 19th, and I still have not received them or gotten an email that they’ve been received by Georgetown, even though my mom says they got here August 23rd. So it’s been a while,” Smith said in an interview with The Hoya.

Smith said she is anxious about using mailroom services in the future to have items shipped to her, including her medication, which must be refrigerated.

“I am nervous about using the mailroom for any future shipments, especially ones like my medicine because it has to be refrigerated and it’s very expensive,” Smith said. “If it were to get lost or sit somewhere for a while I couldn’t use it anymore so I don’t really trust the mailroom with that, but I don’t know what the other option would be.”

The university has asked students to retrieve packages as soon as possible after they receive an email notification that their mail is available for pickup and has recommended students purchase items in the same shipment to help ease the strain on the mailroom, according to the Sept. 8 email.

While Medeiros understands the mailroom is experiencing backup issues, they would appreciate more communication from the university on the status of package retrievals, he said.

“Obviously things are backed up, but it’s more than a little opaque how backed up things are, how long we have to wait for things, and I think people have been trying to figure those things out for themselves,” Medeiros said.