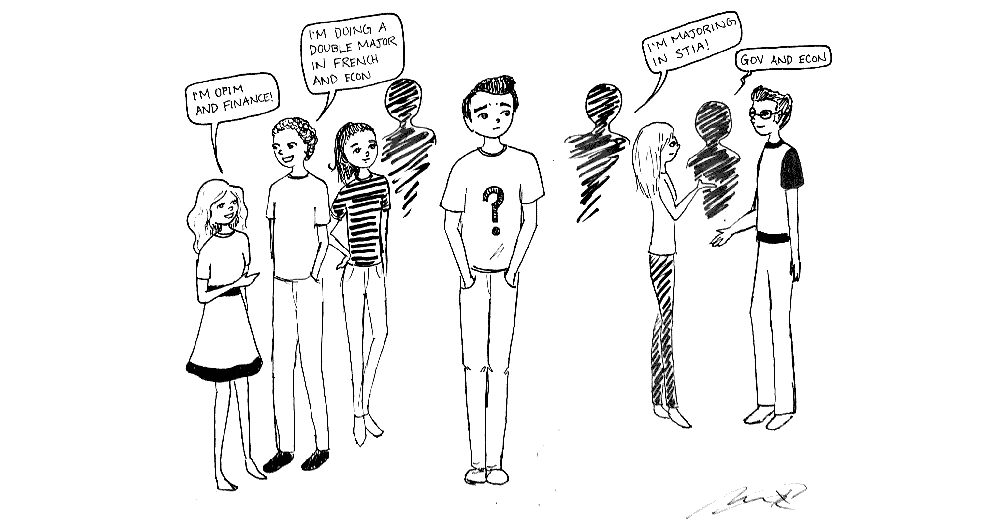 I have a severe case of “undeclared-ness.”

When I decided to come to college in the nation’s capital, I thought I would be able to figure out what I wanted to do for the next four years of my life — that is, what I wanted to study and who I would vote for in the upcoming presidential election. Yet, I have realized that I am just about the most “undeclared” that anyone can get: studying in Georgetown’s liberal arts college with an undecided major.

If you asked me to, I could recite all 50 states in alphabetical order, recall the “Our Father” in Irish Gaelic and run seven miles. But I cannot for the life of me tell you what I want to do with my life.

I cringed during Georgetown’s information sessions when I heard students ask about the “ease” of double majoring among the McDonough School of Business and the College. I still get nervous upon hearing my friends discuss the requirements that they have already fulfilled for their biology major. I freak out when people discuss the overseas program in global finance they are applying to next year. Does anyone else feel the way I do — confused about just plain life in general? I’m still trying to navigate this new college life. How can I think about the future when I have to remind myself where Walsh 497 is every day?

I am amazed by those who have already figured it out. Cheers to those who came to Georgetown with a step-by-step plan. But I also applaud those like myself, who arrived with an abundance of unanswered questions.

According to an article from The Mentor at Pennsylvania State University, “First-year students are still attempting to understand their own identity and, having lived a majority of their lives under someone else’s guidance, they may not yet be able to come to legitimate conclusions about themselves.”

This idea of “identity” becomes a topic hotly debated both externally and internally among freshmen at Georgetown. Who are you? What are you going to become?
Last week, I had my first Four-Year Plan meeting with my dean. I walked in feeling immediately overwhelmed. I feared the worst, and wondered if I would have to make a major decision about the rest of my life in the next 15 minutes. Luckily for me, my dean could not have been nicer. Sure, my Four-Year Plan spreadsheet contains a few holes, but it’s meant to. For the first time in my academic career, I have allowed ample breathing room.

In high school, I was used to the rigidity of structure and requirements. I have always loved and done well at adhering to guidelines, following rules and keeping a plan. This is the first time that I — as well as many of my peers — am choosing my own academic trajectory. How do I know what to do?

Georgetown caters to the confusion of the first year class. Our school’s policy allows for us to try a lot, fail a lot and succeed. According to a New York Times article by Cecilia Capuzzi Simon titled “Major Decisions,” “‘Exploratory’ is the new undeclared. Colleges have moved away from the negative-sounding ‘undecided’ label to encourage students to experiment with unfamiliar disciplines and, perhaps, discover a passion and career path.”

Being “exploratory” shows the beauty of the learning process: try a lot and fail a lot. I know I sound like a broken record or a prophetic grandmother by saying this, but I am sure it’s the truth.

Step one — choosing what to study — is difficult enough. Step two is applying this to the real world.

According to Business Insider, a venture capitalist once said that certain majors were “soft[er]” than others, and therefore less useful and valued in society. The article then criticizes the naivete of this comment, explaining that some of the most successful entrepreneurs who graduated with such “soft” majors, such as English, history or philosophy, have taken charge of multibillion-dollar corporations and have landed high profile positions. For example, Mitt Romney was an English major at Brigham Young University, and later became a frontrunner in the 2012 presidential election. Carly Fiorina received a degree in medieval history and philosophy from Stanford University, and was not only the CEO of Hewlett-Packard, but is also a presidential candidate.

If it’s not about the title of your major, but the application of your major, why not take your time deciding a major? Don’t worry about taking economics or computer science because it will get you a job. Take medieval literature. Take the “Harry Potter” elective. Do what you love and the rest will fall into place.

Risks and confusion make a better person. Georgetown students are among the most experienced in the world. And why? Because they try everything. It doesn’t matter if they tried, failed and then re-evaluated. Experiences come from the process, not the end result. Do what you want to do, not what you have to or should do.
So, if you have got it figured out, congratulations! But if not, my advice to you is: Take a breath and take it slow. Don’t worry about the name of your major. Try everything out. With more risk-taking comes greater life experience. I know that I can learn more from knowing less.

Sarah Jackmauh is a freshman in the College.