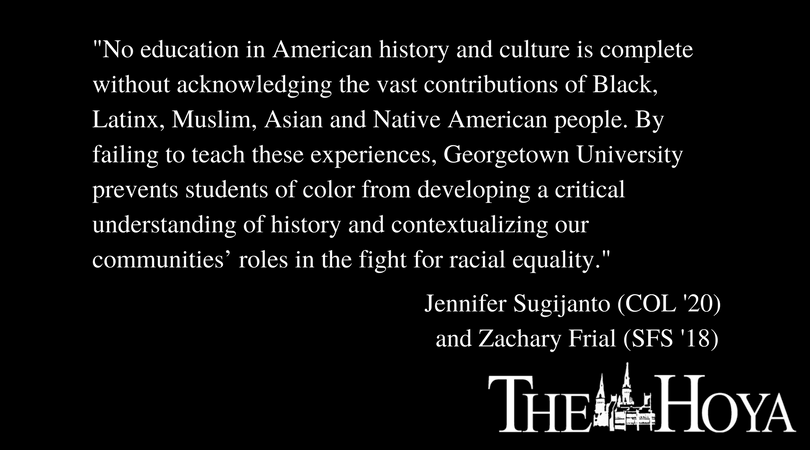 No education in American history and culture is complete without acknowledging the vast contributions of black, Latinx, Muslim, Asian and Native American communities. We live on the land of Indigenous peoples and profit from the labor of immigrants and people of color. By failing to teach these experiences, Georgetown University prevents all students — particularly students of color — from developing a critical understanding of history and contextualizing our roles in the fight against racial injustice.

In 2016, Georgetown University President John J. DeGioia made a commitment to Georgetown’s black students to “address the structural causes at the root of persistent inequalities—persistent racial injustice—in American society.” The Asian-Pacific Islander Leadership Forum asks the university to extend the same commitment to its Latinx and Asian American students.

Eight years ago, the Academic Diversity Working Group, as part of Georgetown’s Initiative on Diversity and Inclusiveness, published a report suggesting that the university “increase the resources it devotes to [the] changing face of American society” and “take additional steps to increase the diversity of its faculty.” DeGioia affirmed the working group’s recommendations, saying the university would “explore creating new programs” in African-American, Asian American and Hispanic/Latinx Studies.

Eight years later, we have an African American Studies major and department, the result of diligent organizing by black students and faculty. As nonblack students of color, we are fully indebted to their work, which has paved the way for us to make this request:

Despite sustained effort by Latinx students and faculty, Georgetown has made no moves to create a Latinx studies program. To this day, there are only three classes that focus on the U.S. Latinx experience. Since 2010, Georgetown has offered just one course that reflects the Asian American experience: “Asian American Literature.” This course was last offered in fall 2016 and not at all during the 2017-18 academic year.

How long until we see our history taught in the classroom? When will we learn about the decades of exclusionary immigration policy, the internment of Japanese Americans, the radical history of black-South Asian solidarity, the role of Filipinos in the United Farm Workers movement and the struggles of refugees from the Korean and Vietnam Wars?  When will we have classes on the battles waged by revolutionaries like the Ghadar Party and Eqbal Ahmad, Yuri Kochiyama and Grace Lee Boggs? When will we have the opportunity to study the work done by contemporary activists like Tanzila Ahmed and Deepa Iyer, Tamara Ching and Jose Antonio Vargas?

In our call for an Asian American Studies program, APILF consciously follows in the footsteps of our black peers who spearheaded the initiative for an African American Studies major, of our Indigenous/Native American peers who are participating in the Indigenous Studies Working Group and of our Latinx peers who have pushed for a Latinx studies program time and time again. We ground our efforts in the legacy of the Third World Liberation Front’s fight for Ethnic studies at San Francisco State University and the University of California, Berkeley between 1968 and 1969, which inspired countless students of color to fight for representation within university curricula across the country — a movement that continues to this day.

As the first step in our campaign, we ask that Georgetown support the Georgetown University Student Association and APILF’s joint effort to introduce an “Introduction to Asian American Studies” course for Spring 2019. Linked here is a potential syllabus for such a course, written by APILF and ready for university action.

We expect that Georgetown, an institution which prides itself on diversity and pluralism, will make progress with these demands.

Jennifer Sugijanto is a sophomore in the College and the director of projects for APILF. Zachary Frial is a senior in the School of Foreign Service and APILF’s senior adviser.