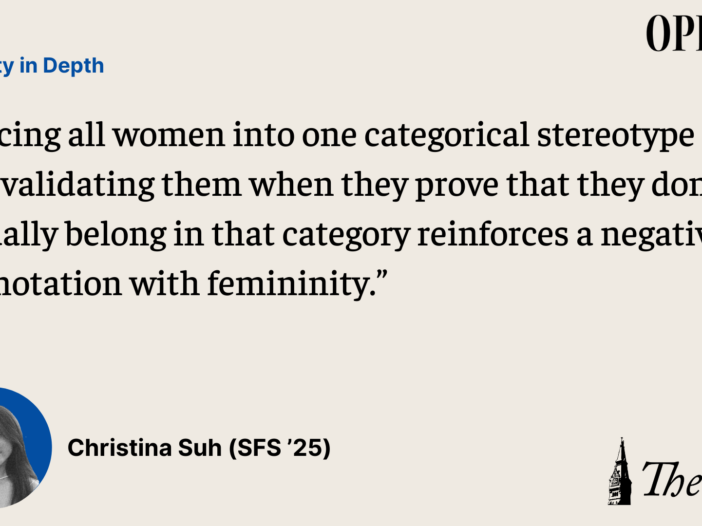 I was 10 years old when I watched “10 Things I Hate About You” for the first time, 12 when I fixated on the enigma of Kat Stratford’s character and 18 when I started despising her for the trope she represents. Kat Stratford was the bold, witty and nonconforming female protagonist who upended the traditional conception of how girls should be, and my impressionable preteen self romanticized her deviance from the historically oppressive mold of femininity that I had internalized.

Kat listened to rock music and wore cool jeans. She casually referenced Sylvia Plath in conversation and voluntarily rejected the practice of dating. Essentially, she was the quintessential embodiment of the “not-like-other-girls” girl.

This personality was only magnified by the way she was framed as the refreshing antithesis of her softer, more modest, more “feminine” sister Bianca. Bianca catered to the conventional views of how women ought to be and act, norms ingrained by a past rife with political suppression and societally imposed restrictions on expression. Such factors culminated to concretize a monolithic model for an entire gender, one defined by docility and shallow interests. This model became the assumed standard for all women, and so any sharp aberration from it gave one the privilege of being “not like other girls.”

Among women, there’s a movement that promotes diverging from the reductive archetype assigned to them as a means of reclaiming the identity that has been stolen from them. The stigma around women is so potent that they feel that the only way to rid themselves of it is to reconstruct their gender identity entirely — to strip themselves of their femininity and strive to be something other than woman. So they subconsciously repudiate conventional yet entirely valid aspects of stereotypical femininity in order to escape the superficial role that has been universally assigned to them. Often, this is most conveniently achieved by mimicking traditionally masculine behavior.

It’s important to recognize that most times, this effort doesn’t include overtly making the effort to shake off their femininity but rather, it is a largely unconscious phenomenon that affects the way women perceive themselves. It’s less about trying to get rid of one trope and make it into another, and more about how society continually imposes new overromanticized ideals for girls to try and reach, creating another unattainable standard after another to replace the old ones.

Therefore, the “not like other girls” trend is not as progressive as it initially seems — it’s simply another iteration of the pattern of conformity to which women are continually subjected. The “non-girly” girl is just a new paradigm, but one that maintains the suppression of individual differences among the gender.

This ideal may change, but society will continue to perpetuate this problem because it hasn’t been dismantled, only restructured. Regardless of its form, coerced conformity continues to persist. Therefore, tropes like the “not-like-other-girls” girl are harmful charicatures that sustain this toxic cycle of anti-feminism, and we must end their societal relevance in order to end the chokeholds that they have on women.

This trend is one driven by misogyny, but masked by the illusion of a glorified wave of feminism. This specific “not-like-other-girls” crusade inherently posits that femininity is something to be ashamed of, and that breaking free from its shackles is a form of liberation.

It prescribes a deviance from typically feminine activities and interests, and everything she does — from the media she consumes, to the hobbies she practices, to the people she surrounds herself with — reveals how much she adheres to it. And when a girl acts in any way that appears to transcend this reductive baseline of activities, she is lauded for shaking the superficial nature that society has assigned as the standard for the entire gender.

Placing all women into one categorical stereotype and validating them when they prove that they don’t actually belong in that category reinforces a negative connotation with femininity. This phenomenon creates an aversion to “typically feminine” activities because women internalize the view that these activities are frivolous and engaging in them will diminish their respectability.

These ever-changing paradigms that ultimately create a woman’s reality are not the feminist tools that we think they are. They reinforce expectations for how a woman should act, and just because these expectations are no longer passivity and shallowness doesn’t automatically mean they serve as mechanisms of empowerment. Kat Stratford is indeed a dominant woman whom people can admire for her outward strength and candor, but we should also understand that there is room for women to express themselves and their gender in whichever ways are best and most authentic for them.

Christina Suh is a first-year in the School of Foreign Service. Identity In Depth is published every other week.