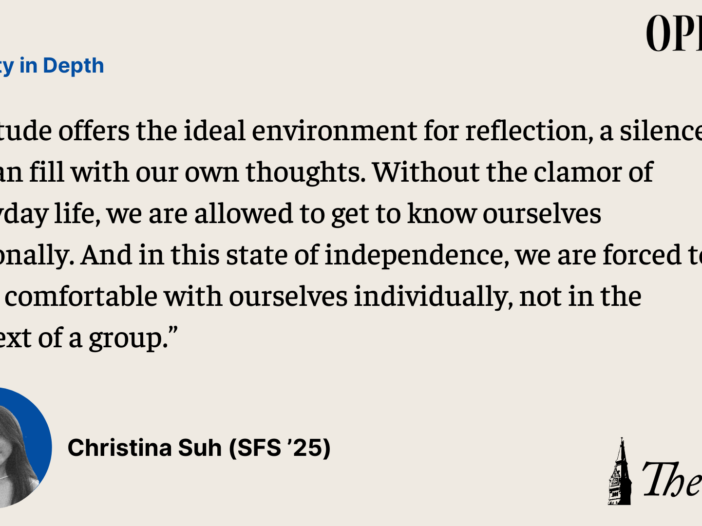 Humans are alleged to be social animals, on the ontological basis that society precedes the individual. But does that social nature preclude solitude in daily life? If we are naturally programmed to function as a group entity, does that mean we are biologically driven away from spending time alone?

There certainly is something that blocks people from being comfortable alone — it’s why we feel anxious doing things and going places by ourselves, and why we constantly gravitate toward the company of others and the attachment of relationships.

But I propose that this discomfort stems from a mental, rather than biological, block, from the stigma around solitude that impedes us from reaching our full potential.

The problem presented itself to me in harsh clarity just weeks into college. In hindsight, it was an inevitability — I had just been severed physically from every emotional contact I had ever had, and implanted into an environment where I was expected to start the relationship-building process from scratch. But in the moment, the vacuum that this transition left was a shocking reality that terrified me to such an extent that I failed to recognize it as a reasonable outgrowth of change.

Said vacuum manifested itself as loneliness, a void that I desperately tried to escape by filling it with people. I forced the first peers I met into the spaces left by the friends and family of my past regardless of whether they fit those preexistent molds. The subconscious fear of my problem, coupled with the disorienting nature of this unfamiliar emptiness, impaired my rationality, and I reductively prescribed corporeal company to fill this emotional void.

People, regardless of who they are, appear to be the easiest solution to protect oneself from the malignancy of loneliness. But maintaining the belief that constantly immersing ourselves in social interaction can prevent loneliness is naive. The unavoidable reality is that the presence of people doesn’t translate to the absence of loneliness.

Solitude is too hastily likened to loneliness — and while the latter may be something better avoided, the former doesn’t necessarily have to be.

Loneliness is the emotional state of feeling like you don’t belong anywhere, and this weight of social rejection is incredibly burdensome. But solitude is merely the physical condition of being alone — it doesn’t automatically assume loneliness, even though these concepts are often conflated.

Unfortunately, these lines are especially blurred in the college setting. The stigma against solitude is exacerbated because we’re young, we’re fun and we’re supposed to live out the final stretch of our youth with grandeur.

When your school is your home and your classmates are your neighbors, the norm of always being around people arises — as well as the sense of personal failure if you aren’t. We are constantly surrounded by temptations for the immediate gratification of belonging, and in the vulnerable initial period when friendships feel particularly circumstantial and sensitive, the appeal of being part of something is particularly enticing.

We don’t want to sacrifice this fleeting era of socialization, but when we internalize the obligation to always be around people, we consequently render ourselves unable to feel secure alone.

We don’t carve out time to sit with our own emotions or view ourselves apart from these contexts where we exist in relation to others. So we tend to fill both the guilt of being alone and a fear of silence with constant noise.

But loneliness is often most fervent when we are surrounded by people. The contradiction screams that the problem lies not in the physical situation but in ourselves.

Ironically, I find that the solution to loneliness is spending time alone.

Solitude offers the ideal environment for reflection, a silence we can fill with our own thoughts. Without the clamor of everyday life, we are allowed to get to know ourselves personally. And in this state of independence, we are forced to grow comfortable with ourselves individually, not in the context of a group. Simply pausing the whirlwind of social interactions and taking time for introspection empowers us to shape our own reality and subsequently our own identities.

Solitude can perpetuate loneliness, and loneliness often begets solitude, but these are isolated phenomena. We can easily be surrounded by people and still feel that void of unbelonging, just as easily as we can be alone and know that a support network exists beyond our immediate vicinity.

Reaching this level of security — a point where we no longer need to prove to ourselves that we belong somewhere — remains a difficult task. But alone time can help us get there.

We may be social creatures by nature, but we ultimately exist within our communities as distinct individuals. In order to build any meaningful relationships, we must work on defining ourselves before developing our group identity. At stake is a society fractured along individual lines and consequently a deeply lonely world.

Christina Suh is a first-year in the School of Foreign Service. Identity in Depth is published every other week.